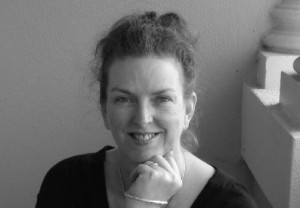 Jacq Molloy, a tutor on Creative Writing courses A215 and A363, won the Frome short story prize over the summer with her story ‘Wake’. The competition attracted over 550 international entries. Literary agent Jane Judd wrote to Jacq to say, ‘this story is very well written and a worthy winner.’

The story has a teenage girl as its narrator and is set in Belfast during the height of the troubles. The main action involves the girl, a coffin and a chocolate biscuit. Jacq lived in Belfast as a child and the story is based on her experiences of attending funerals and wakes: regular family outings!

Jacq was thrilled to win the competition and said, ‘It was a lovely surprise to get the phone call from the competition organisers and to have such positive feedback for my story. The setting and themes are ones I return to as a writer.’

Jacq is working on a series of stories about growing up in Belfast and though they usually involve loss, they also include black humour. ‘As a child it was perfectly natural for me to attend wakes on a regular basis and though there were plenty of tears, there was also much laughter. It is that bitter sweet combination that attracts me as a writer.’

This entry was posted in awards and prizes, short stories. Bookmark the permalink.