Andrew Garvin contributes to a new play, ‘The Trackers’

Andrew Garvin has contributed to a performance of the satyric play by Sophocles – entitled The Trackers. He co-operated on the English version of the play, which is contained in the book and programme for this performance. 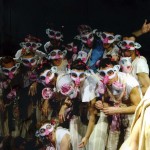 The performance of the play was generated from a Congress on Drama in which the Royal Academy of Drama, the University of the Sorbonne, and the Piccolo Teatro di Milano participated. A highly successful and well reviewed performance of ‘The Trackers’ was given on 30 June 2011 at the ancient theatre of Ephesus, Turkey, as part of the Izmir Summer Festival. Performances are being planned now for many other theatres.

Andrew writes: ‘My role in this project was the very-thoroughgoing editing and, in many places and passages, rewording from the version by Mr Andreadis of the English version of the play. This was essential because Mr Andreadis, the first translator, wanted a highly popular and colloquial version to suit the satyric and comic nature of the play, but knew little of this type of English language of the people. 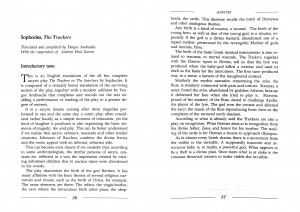 I worked to a small extent with translation but to a far greater extent with more colloquial, carnivalesque wording to bring the popular style of Andreadis’s English translation into greater relief. In this I was drawing to a certain extent on the fiction I have already published (such as ‘Cabinets’, a short story in the anthology entitled Unthank introduced by Sir Malcolm Bradbury). So my main part in the shaping of the translation and performance involved attendance at the initial Congress and afterwards particularly close and fruitful cooperation with Mr Andreadis on the reworking of the actual wording of the English version.  The programme of the play is the book on whose English version I have worked. After the performance at the Izmir Summer Festival in Turkey, the play has been put on at Eleusis (the location of the ancient Greek mysteries) and several other locations.’

This entry was posted in performance, plays, translation and tagged Greek drama, touring. Bookmark the permalink.