Michael Stewart’s novel wins the Not the Booker prize

Michael Stewart’s novel King Crow, published in January 2011, has been voted the winner of the 2011 Not the Booker prize.  The prize is awarded by readers of the Guardian books blog, after an extended process of nominations, shortlisting and reviewing in the Not the Booker prize blog. 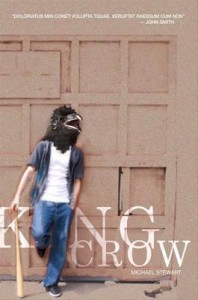 Blog editor Sam Jordison describes the novel as ‘psychologically adept, funny, nasty, daft and shockingly realisitic all at the same time. It’s just the kind of thing the Not The Booker prize should be promoting.’  In his review of the novel in a blog entry of 26th September, he writes: ‘King Crow is the literary equivalent of a British Sea Power album. It’s full of driving riffs and bristling with energy and menace, but it’s also often tender and lovely. Plus there’s loads of stuff about bird-watching and Kendal – oh and it’s bonkers. It’s great, in other words.’

This entry was posted in awards and prizes, novels and tagged Guardian, Lake District. Bookmark the permalink.