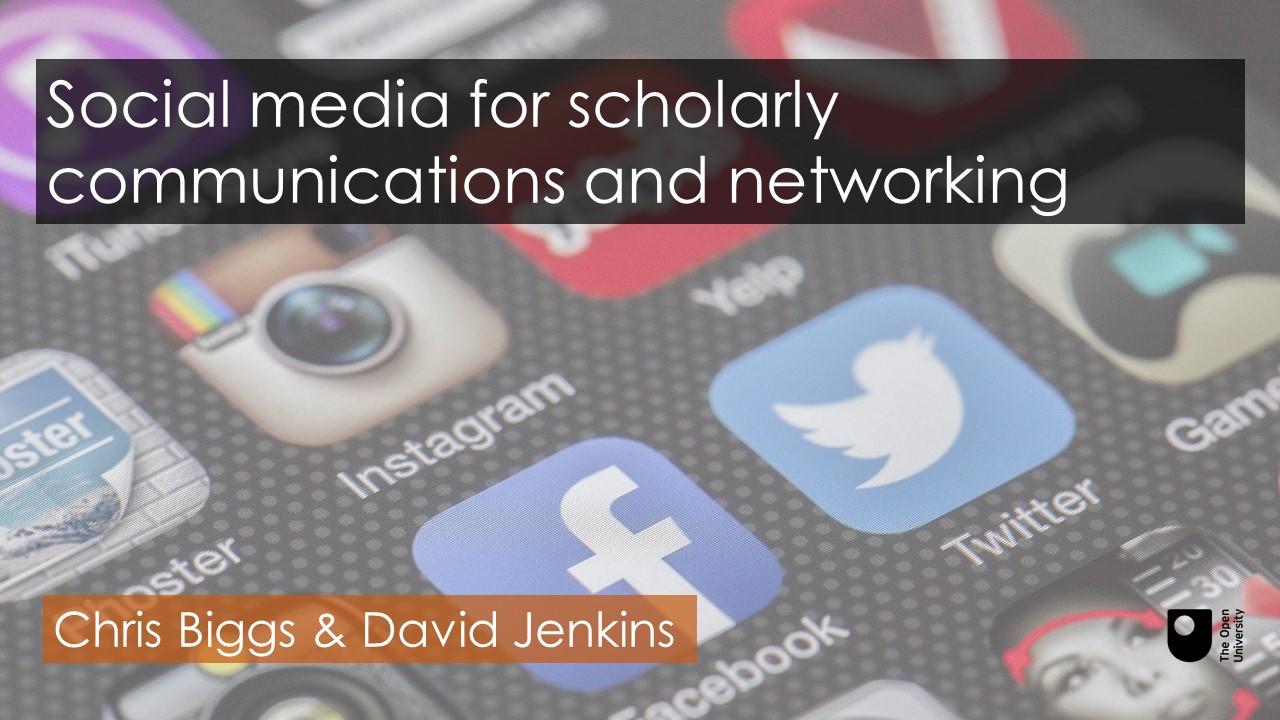 David, Dan and I recently ran a training session on Social media for scholarly communications and networking for first year PhD students.

Our aim was to give an introduction to the kinds of social media tools and techniques available, look at what can be achieved with them, and how you can tailor your approach to get the most out of them while avoiding potential pitfalls. We also wanted to give attendees a chance to reflect on their current use of social media, and to think about how they might use it in future, using a couple of UX activities.

The session was informed by Mark Carrigan’s Social Media for Academics and talked about how factors such as how much time you have, whether you want to collaborate or work individually, and whether a task is intrinsically or extrinsically motivated, will contribute to how you use social media.

We then went on to talk about several sites and tools as examples of what’s out there, some key features of them, and how others are using them.  Promoting your own work and actively encouraging interaction and networking can require different ways of presentation and engagement.  If one of the aims of using social media is to grow your network, or audience, then it’s good to find out more about people you want to be part of that network – this may take some fine-tuning.  It’s also important to consider how a new audience might want, or be able, to understand you and your work – are there barriers of understanding and access that you can mitigate by providing different versions or summaries of your work?  Can you make sure your work is understandable and accessible to those without the background knowledge and or subscriptions to academic publications?  Open Access and social media seem natural bedfellows.

Pulling all of this together we saw some examples from ORO where promotion and interaction with social media, using methods like featuring links and images, can lead to increased impact and reach of work.

Lastly, we talked about the risks of using social media, and the potential down-sides in terms of reputation, potential for plagiarism, and sometimes just making sure you are not misunderstood in a medium where nuanced expression and debate can be hard to achieve!

Our first UX activity kicked off the session and served as a really good ice-breaker.  David started by introducing the concept of Visitors and Residents, as described by David S. White and Alison Le Cornu.  It asks us to think about how we use and engage with aspects of the online world in different ways, depending on what we want to achieve, and whether – and how much – we wish to interact with others and/or leave a digital trace.  The idea is to place our activities on a scale of engagement for each tool or task, so there is no absolute status as a Visitor or Resident (or right or wrong way to engage). We asked attendees to draw their own their own activity maps on the Visitors/Residents scale, and also on a scale of personal or institutional use. 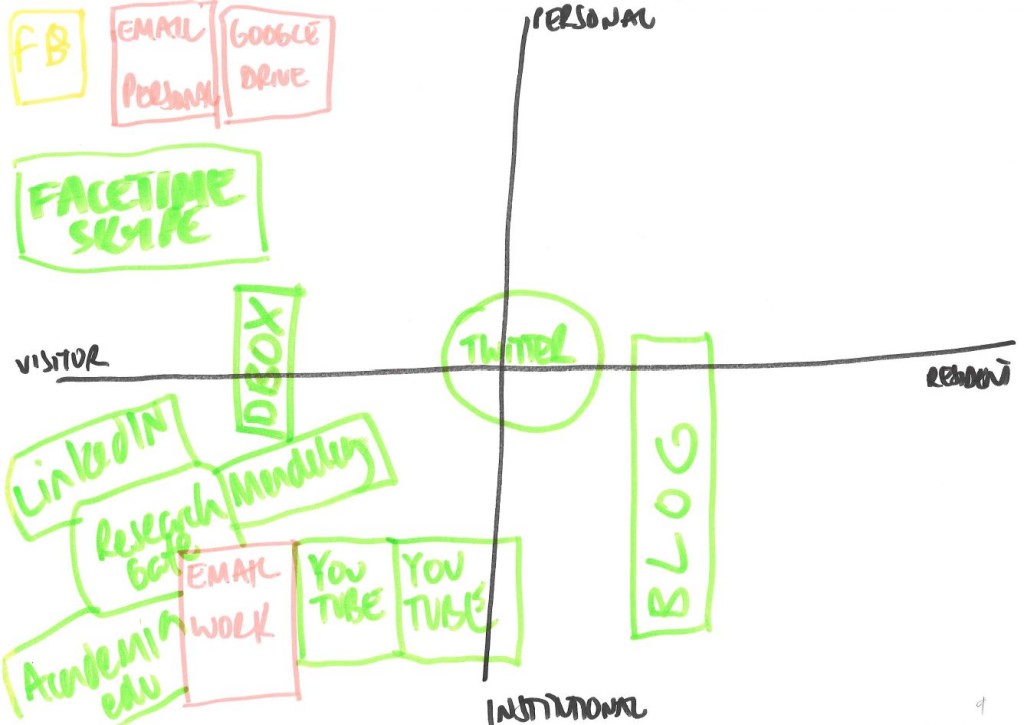 My map was influenced by some online activities I had done over the previous couple of days – so felt it was a bit skewed – but I took some delight in relegating Facebook to the furthest corner!  Moreover, there were aspects (e.g. banking & shopping) that I completely overlooked – so I think some bits of online life are so ingrained I’m not consciously aware of them being online! 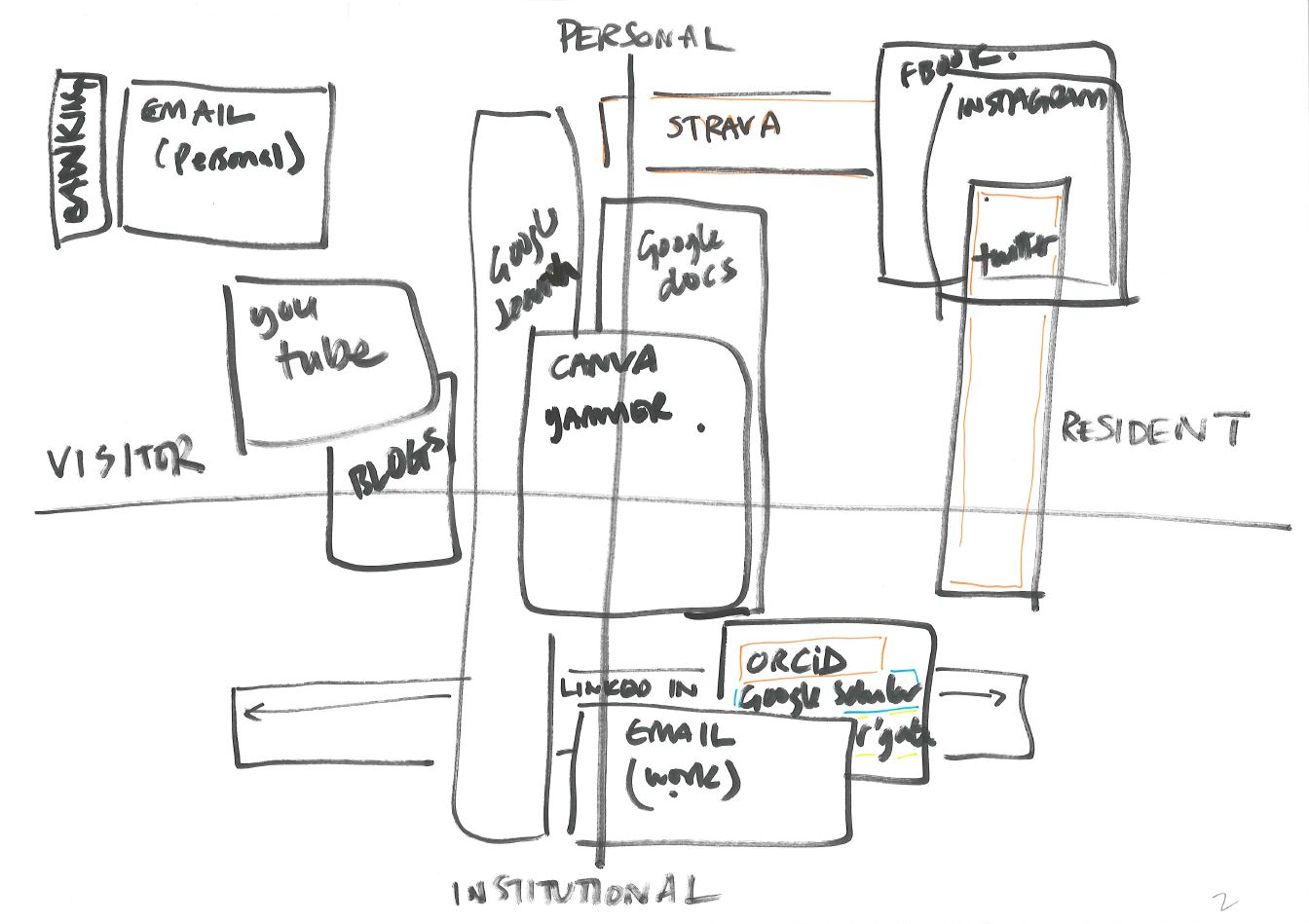 “Having recently joined the OU from another university I found myself thinking about tools that were relevant in one environment but perhaps not in another, or that I might use differently in a new context.  I guess this goes to show that behaviour can change and we can adapt usage to new situations.  On reflection, I also think I miss-mapped a few things, which all suggests I should probably do it again in a couple of months and compare the two maps” – Dan.

After the session we collated the results of the visitors/residents exercise in a wordle to find the most popular services. 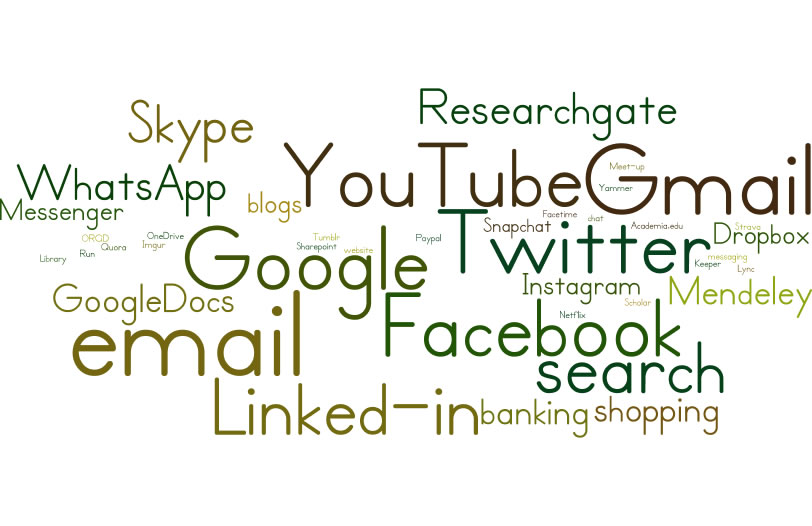 Unsurprisingly, Google looms large, as does email, Facebook and Twitter. But there were a couple of things that stood out.  One is identifying tools that we can develop training and support for, such as Linked-in, which many of the group were using. Another is that YouTube is also very popular, for both institutional and personal use, so we might do more to provide support material in video format on that platform?

The relative popularity of general social media (Twitter, Facebook, etc) over more academic-focused systems (ResearchGate, Academia.edu and ORCiD) wasn’t surprising, given that the attendees are relatively new to their research careers, but it was interesting to see that in our group ResearchGate was noticeably more popular than Academia.edu.

It was also evident that people tended towards the visitor side of the spectrum rather than the resident side.  Maybe that’s accurate or maybe the attendees were a bit modest.

We concluded the session with a second UX exercise, a card sort.  Groups discussed and ordered a set of cards featuring types of information we might be comfortable sharing on social media, from our thoughts on the current political situation to fully-formed academic outputs. 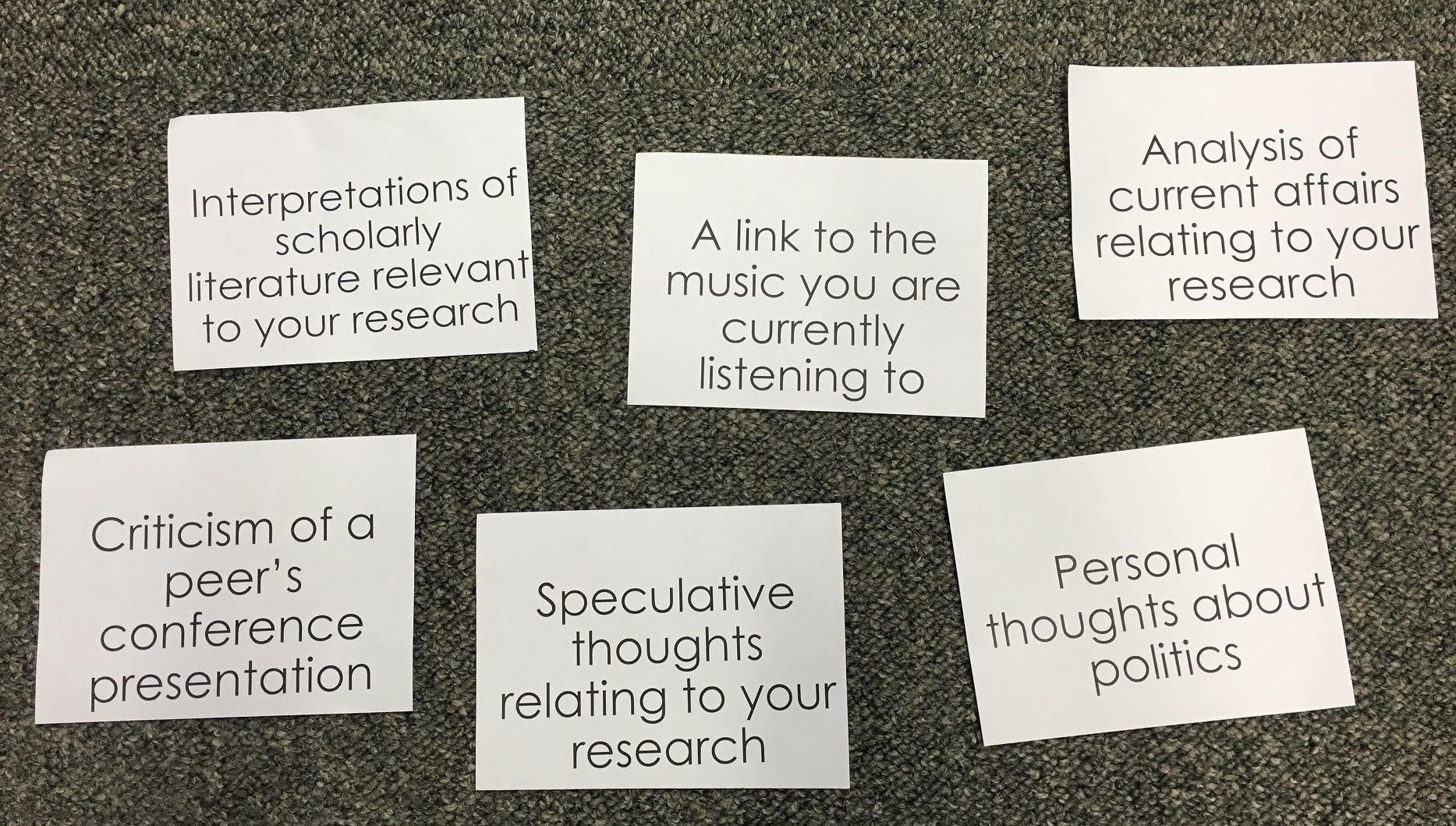 The card sorting exercise led to interesting discussions about what is appropriate to share, on which platform to which audience?  There are things we would happily share for example on Facebook with our friends and family that we wouldn’t share with our peers, which added an extra dimension.  Are you interested in the music someone you follow is listening to or are you only interested in new papers in your field?  Perhaps people respond more to a three dimensional profile on social media?

We hope everyone had a good introduction to the topic and saw that traditional methods of scholarly communication and networking can be augmented, complemented and in some cases substituted by social media.  The questions and contributions to discussions throughout were very welcome, so thanks to everyone who came and took part.  If you are interested in us running the session for you and your colleagues get in touch!