A problem for 2024? Consent in the Northern Ireland Protocol

Given the amount of political anguish caused already by the Northern Ireland Protocol (NIP) since its conception during the Withdrawal Agreement (WA) talks, it might seem odd to write today about one provision that can’t be used until late 2024 at the earliest.

However, the Art.18 provisions on consent represent a key safeguard for the Protocol’s long-term survival, whatever comes of the endless debate about what should happen.

As a reminder, the NIP can only be amended or revoked by the joint agreement of the signatories – the EU and the UK – something that appears deeply unlikely, either now or for the foreseeable future. Likewise, the Art.16 provision on safeguards only allows for a temporary and limited suspension of some parts of the NIP while the signatories find a solution: as discussed elsewhere, it’s not a unilateral (or long-term) solution.

So the only mechanism available to just one party to make a lasting change to the Protocol is Art.18.

As the graphic below sets out, the Northern Ireland Assembly gets to vote in late 2024 on whether to continue the main substantive elements of the NIP (excluding citizens’ rights) for another four years (eight if majorities of both unionist and nationalist designated MLAs can be found).

This not only accords with the intention of the Good Friday Agreement to make the Northern Irish the deciders of their situation, but also provides a way for both the EU and London [sic] to distance themselves from any repudiation of the Protocol

The coming Assembly elections will be a test of this, both in the campaigning approach of unionists (who seem very determined to push for the NIP’s collapse) and in the likely shifts in MLA numbers.

This latter point is not only about the likely rise in the number of Sinn Fein MLAs (which will help with the basic overall majority requirement), but also the potential growth of ‘other’ designated MLAs. Under Art.18(6), these do not count in the ‘cross community support’ calculations, possibly making it yet harder to achieve the necessary threshold for an eight year continuation.

However, to return to the present, consent isn’t the main topic of debate around the Protocol right now. The EU’s easement on medicine supply this week points to the on-going efforts to demonstrate how the NIP can be made to work better through engagement, but this will not be the rhetoric of the DUP and other unionists in coming weeks.

At the same time, if the current Art.16 ‘shall we, shan’t we’ argument is outridden, then Art.18 will come much more sharply into view and the way voters split this May might turn out to be crucial in deciding the outcome. 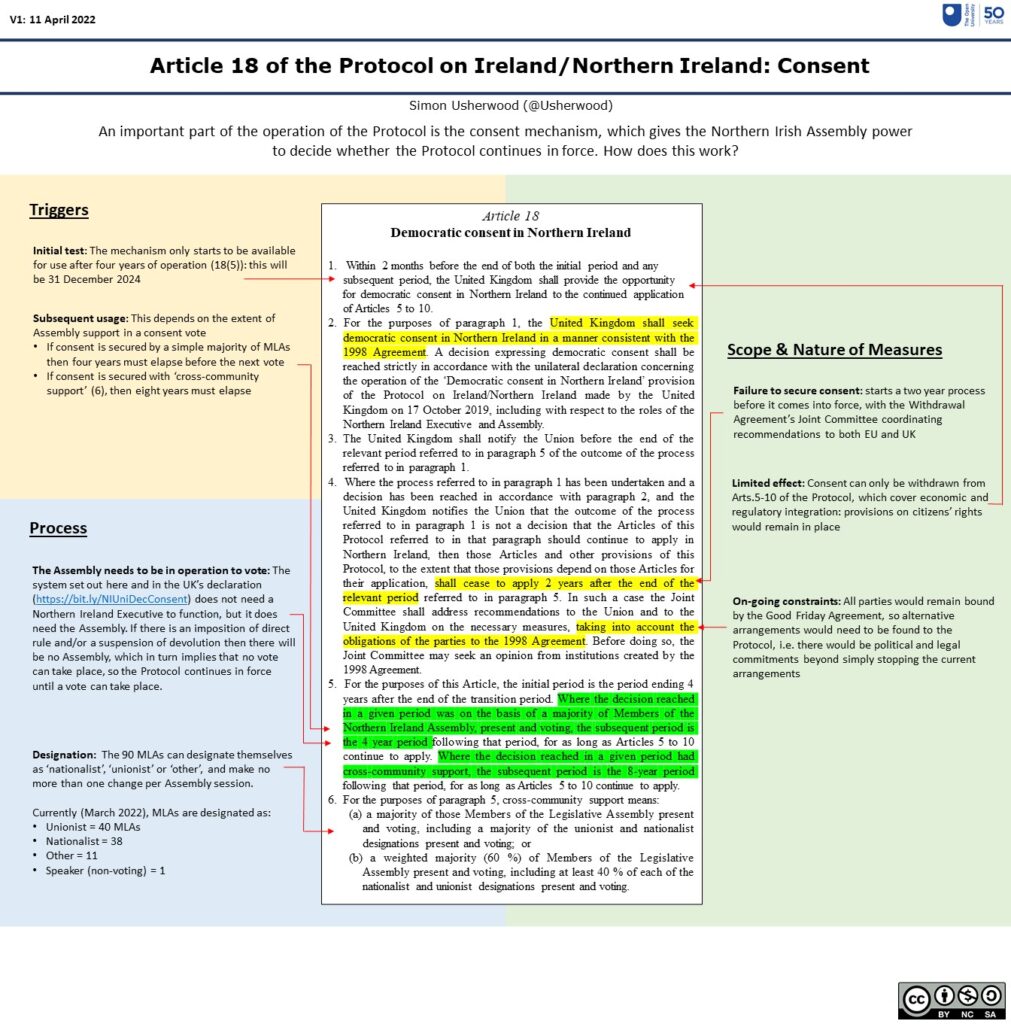