‘A dress for Kathleen’: family history in text and textiles

Every family has shadow people, the ones who slipped out of the story too soon, leaving a blank space where they should have been. In my father’s family that person was his sister Kathleen. She died after falling from her bicycle on her way home from work in December 1939, just a few weeks short of her fifteenth birthday. 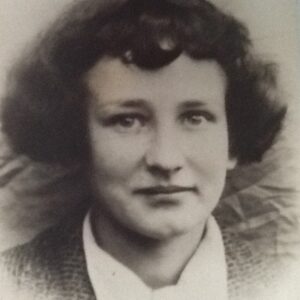 Kathleen had stayed late that evening at the linen mill where she was a trainee typist, before setting off to cycle the six miles home on a dark country road. It was the wartime blackout laws that were her undoing. Cyclists were obliged to shade their bicycle lamps so that enemy aircraft couldn’t see the light from above. With only a feeble beam shining on the patch of road directly under her front wheel, Kathleen had no chance of seeing the local farmer making his way home on foot. She swerved sharply at the last minute, fell from her bike and suffered a catastrophic head injury. She died two days later without regaining consciousness.

Writers like to impose pattern onto the muddle of experience, to shape the arbitrary into a narrative arc. I wanted to do something different for Kathleen. What if, instead of writing about her, I made a gift for her? A way of honouring the short time she had and mourning the many years she never saw. I imagined a different future for her, one where her supervisor had let her leave work fifteen minutes earlier or made her stay ten minutes later that wet December evening in 1939. Or where the farmer had been delayed in setting out for another half an hour. A future where that quiet, disastrous collision had never happened, and Kathleen had cycled safely on home. In that future she’d have celebrated her twenty-first birthday by having a dress made. It would not have been extravagant – simple cotton, no doubt, but pretty enough to wear to a dance. And that is how ‘A dress for Kathleen’ began. I would make a dress for her. I would tell her story in stitch. 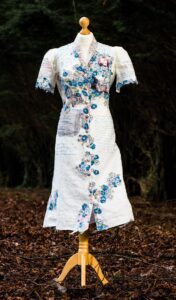 Sewing requires concentration and attention to detail – it can’t be done mindlessly. It’s absorbing, but at the same time seems to open up a breathing space in the mind where ideas come out to play almost unnoticed. Textile craft speaks to the human need to make. Anything we make with our own hands carries with it a story.

The dress I made for Kathleen tells her story both in form and words. The dress itself is made from linen woven in the mill where she worked. The dressmaking pattern is from 1946, the year she would have turned twenty-one.

I wanted my Kathleen to be alert to the world around her – its smells and colours and tastes. So I began to write fictional fragments, imagining her journey to and from work that summer of 1939, inventing her memories. Then I stitched the words onto the dress.

Writing in stitch was a laborious, time-consuming task. The words became a physical thing as well as a symbol or signifier. The dress was in my hands every day, and I came to know how the fabric responded, how best to work with it. There was a sense of connection – communion, almost – that doesn’t happen when writing with any other media. 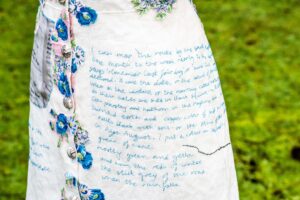 In addition to the words, I embellished the dress with various images, printed onto silk: old family photographs, a picture of the house where Kathleen grew up, my grandfather’s army record, pages from the linen mill’s order book. The back skirt of the dress has a map of the district stitched on it, based on an Ordnance Survey map from 1900. Finally, I appliquéd the whole garment with scraps of vintage floral cotton-linen fabric – the sort of fabric Kathleen might have had made into a dress.

So the story is made of linen. It’s compact and unassuming, like the young woman it was made to fit, a young woman with the slim waist and narrow back of her wartime generation. It’s embellished with scraps and fragments – words, pictures, maps and absences. There are loose threads and frayed hems, because Kathleen’s was an unfinished story. I once read that when a person dies young, they cast a shadow across all the years they should have lived, and it’s true that the pain of Kathleen’s death is still felt – albeit faintly – within the family. But ‘A dress for Kathleen’ is not about shadows. It’s about life, in all its quiet glory.

Heather Richardson is a Senior Lecturer in Creative Writing

This entry was posted in memoir, Uncategorized, Writing process. Bookmark the permalink.