I first fell in love with Katherine Mansfield as a teenager, when I found an edition of her Journals in a second hand book shop in the Charing Cross Road.  Like her, I had gone to London to try to be a writer and, also like her, found out that it wasn’t at all straight forward.  Later I read everything she’d ever written, fascinated by her short, tragic life and the mysteries (what did happen to the child she had in Germany?) that were never explained. 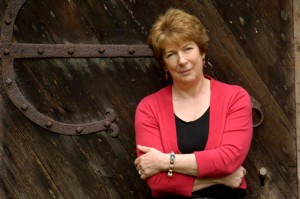 So, in 2000 when my publisher asked ‘What are you going to do next?’  I answered ‘Katherine Mansfield’.   It was the beginning of a crazy journey through Europe to New Zealand and back, through archives and family papers hoarded in the attic, through censuses and birth records,  in search of answers.    I lost my original publisher to the economic upheaval and my agent to maternity leave.   At one point, I thought the book would never be written at all.

But it’s all been worth while, and I’ve benefited from the fact that Katherine Mansfield’s letters and journals have been transcribed and published in the last ten years, and all her husband’s papers are now in the public domain.  I was also lucky enough to be allowed access to private family documents that no other biographer had ever seen.  That’s every biographer’s dream!

But although the research went well, the structure of the book caused me a lot of problems.  I wanted to tell the story of her husband – John Middleton Murry’s – life after she died and describe how Katherine haunted his three subsequent marriages like du Maurier’s Rebecca. And I needed to show how Murry handled her huge legacy of unpublished manuscripts and constructed a reputation for her after her death – the Mansfield Myth.  But  I knew that once Katherine had died, a lot of her fans might stop reading and the book would lose momentum because it’s main focus had gone.    So I decided to tell Murry’s life story in parallel with hers in interwoven sections using fictional techniques.

The next controversial decision was to tell Katherine’s story in the present tense – I hate that authorial biographer’s voice, all knowing, judgmental, making pronouncements with all the benefit of hindsight.  We don’t live our lives with hindsight, we live it moment to moment and make – often stupid – decisions, based on the information we have at the time.  So I told Katherine’s story in the present tense, which helped me to use her letters and dairies seamlessly – telling as much as I could in her own words.  The Murry sections are in the past tense, in traditional biography mode, which allowed me all the authorial comment I needed and which the present tense doesn’t allow.

The other decision I made was to have a circular structure.  Katherine’s death is the one thing that people seem to remember about her life – running up the staircase at Fontainebleau to collapse at the top with a tubercular haemorrhage.  I realised that everyone would be reading through the book waiting for that scene, so I decided to have her death at the beginning, which then allowed me to morph quite naturally in the second chapter into her husband’s life and the handling of her legacy.  At the end of the biography, it allowed me to finish the story optimistically with her work, which did go on after her death.  The reader can then, if they wish, go back to the first chapter and read it again.

Experimental technique in biography is a considerable risk – not every reviewer has liked it, but I’ve been flooded with emails from ordinary readers and academics telling me that it has illuminated Katherine’s life for them and given them a greater understanding of the context of her work.