Derek Neale’s debut novel has been published by Salt. Set in the UK and Canada, The Book of Guardians is a detective story for our time – the detective is no policeman but a cross between social worker and lawyer. It’s his last case. He finds fathers for a living, grapples with domestic chaos and tragedy on a daily basis – just as well.

Derek says: ‘The novel grew from an image – of a shed at dusk with birdsong rising from an adjacent 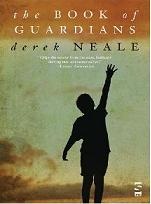 holly tree, a freshly watered seed tray by the shed’s window – that’s the key, something new growing from something dusty and overgrown. There was a woman with dark hair and a child, and a suspicion that Charlotte Brontë’s Jane Eyre was in some way bound up with events. And who was the child’s father? Always a good question to ask.’

It’s a story about searching for mothers and fathers, for antecedents, about searching through memories to invent ourselves; getting lost then found in the labyrinthine myths we invent about our pasts and who we think we are. That’s the grand version  – but as Derek says, it’s also ‘just a detective story’. He adds – ‘it has another starting point, well it has many, but one of its other starting points was work I used to do as a freelance copy typist – trying to pay for my first word processor. I regularly typed up these reports for court guardians, about child care cases, and these struck me as incredible narratives, the form of them, chronologies and interviews sitting side by side to create novel-like sagas. That was my primary research. I thought about the cases, of course, but also I thought about what it was like to deal with such cases on a daily basis.’

The result is ‘an often touching examination of the philosophy of  “care”, which tackles head-on the alienation and uncertainty of contemporary lives’, so says one reviewer. 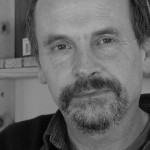 Derek studied on UEA’s MA in Creative Writing and has published stories in various anthologies and journals. The author of several articles and books about writing, he is Chair of The Open University’s Advanced Creative Writing module (A363) and is currently the OU’s Director of Teaching for English.

You can see more about The Book of Guardians at Salt Publishing and www.derekneale.com

This entry was posted in novels and tagged detective story. Bookmark the permalink.