I recently had a couple of visual poems displayed in a Swindon Art Gallery, under the auspices of ‘Domestic Cherry’ magazine and Swindon Artsite. Sometime before that, I had a number of poems displayed,  for a month, in Corsham Library, under the auspices of the Corsham Poetry Society.  A selection of three of these displayed poems are discussed here: I thought it would be interesting to explore their informing principles, which directly led to their process of composition, with you.

Poems are an interplay of linguistic and additional semiotic elements e.g. white space, varying where lines start and end, sound  echoes and so on. This entails that meaning, shape and sound all contribute to a poem’s spectrum of effects. I like to aim at quite minimal pieces, to allow the reader maximum imaginative freedom.

I am attracted to poems, then, that stretch the spectrum of elements i.e. when the shape goes beyond  linear norms, making an instant impact, when the sounds move into the realm of noise, including  onomatopoeia (less prevalent in these examples, perhaps, but there). Finally, foregrounded kinaesthetics is usually present my poems – reading a poem, you move along and down in a rather different manner to that in which you read prose and I try to extend this fact. These verbivisivoco effects, then, underlie much of my work.

Sadly (or, alternatively, happily!) children’s poetry has embraced such techniques rather more than adult poetry, though I do feel that the above poems exist in a crossover space, one in which both adults and children can find equal pleasure. I  certainly got interesting responses from adults, when the poems were on display. Additionally, both adults and children like the poems, judging by responses when I have performed them. All three poems have appeared in publications for children and ‘Dad, the amateur hypnotist’ won  the Thynks adult poetry competition in 2012.

To stop this brief exploration becoming too long, I would  briefly like to point out some factors in the above poems, which helped me to realize them.

PHASES OF THE MOON

In this poem I have used punctuation symbols and the letter O to visually represent phases of the moon, in the order in which they occur. The kinaesthetic element of reading  across and down the page is added to by the visual representation of the moon changing shape. The use of blank space as an element of meaning  completes the action of the poem.  I love the idea of nothing meaning something.

There are also quite conventional elements here,  of course, such as alliteration on ‘g’ and full rhyme.

THE ICEBERG THAT SANK THE TITANIC 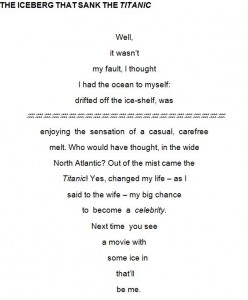 The visual element here is foregrounded i.e. the poem is set out in the shape of an iceberg, with h being included, to suggest the sea. Both these elements add subtle degrees of kinaesthesis, not to mention the notion that the iceberg and the Titanic have collided. However, the poem could also be set-out in a more conventional manner and, thus, become amenable to more traditional analysis: 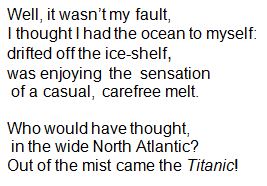 This poem takes the kinaesthetic element further still, in that you have to mimic the swinging of the hypnotist’s watch, as you read the poem. There are onomatopoeic elements too, in both ‘click’ and ‘miaow’. When I perform this poem, I actually click my fingers for the ‘click’. Many children and adults have actually supplied it for me, unasked, at performances.

I hope this very short exploration has been appealing and I would like to end with one final visual poem, which I always send my students, as inspiration, when they start the poetry blocks. 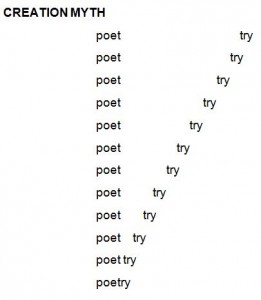 This entry was posted in poetry, Uncategorized and tagged concrete poetry, visual poetry. Bookmark the permalink.