What is the problem with solar thermal panels?

In my research on carbon reduction from heritage buildings, visible renewables such as solar panels are interesting. Quite a lot of the heritage conservation community isn’t necessarily convinced by solar panels on the roofs of heritage buildings and there’s been lots of research in various places to consider how to integrate solar PV sensitively with heritage.

The heritage building residents involved in my research had a range of opinions, but the majority have been quite keen on solar panels or at least felt that while they would have a visual impact it would be acceptable. Some of those in heritage buildings that are listed or in conservation areas have expressed frustration that they don’t think they’d be allowed solar panels. Others have said that they would like solar panels, but they aren’t sure if their roofs would be suitable or would bear the weight.

I had the opportunity to ask the case study participants for a little more information about why they would prefer solar PV to solar thermal. Several of them thought that solar thermal might not be effective in the UK climate. As this research was in Cumbria, where lots of rain is needed to keep the lakes in the Lake District full, they might have a point… although you’d think that a similar objection would hold true for solar PV in that case. Maybe people intuitively understand how solar thermal panels work in a way that they don’t for solar PV, so they are more likely to take solar PV on trust.

A significant number of participants however, felt that solar thermal would have a greater adverse impact on their building’s heritage values than solar PV. This is a bit odd as they both look pretty similar, especially flat plate solar collectors. If people feel that solar thermal panels would have a greater adverse impact, fair enough, they are entirely entitled to their views. However, my theory is that because solar thermal is less common than solar PV people may be less familiar with it and therefore be more likely to be cautious, whereas solar PV is becoming more common, both in reality and in the media. 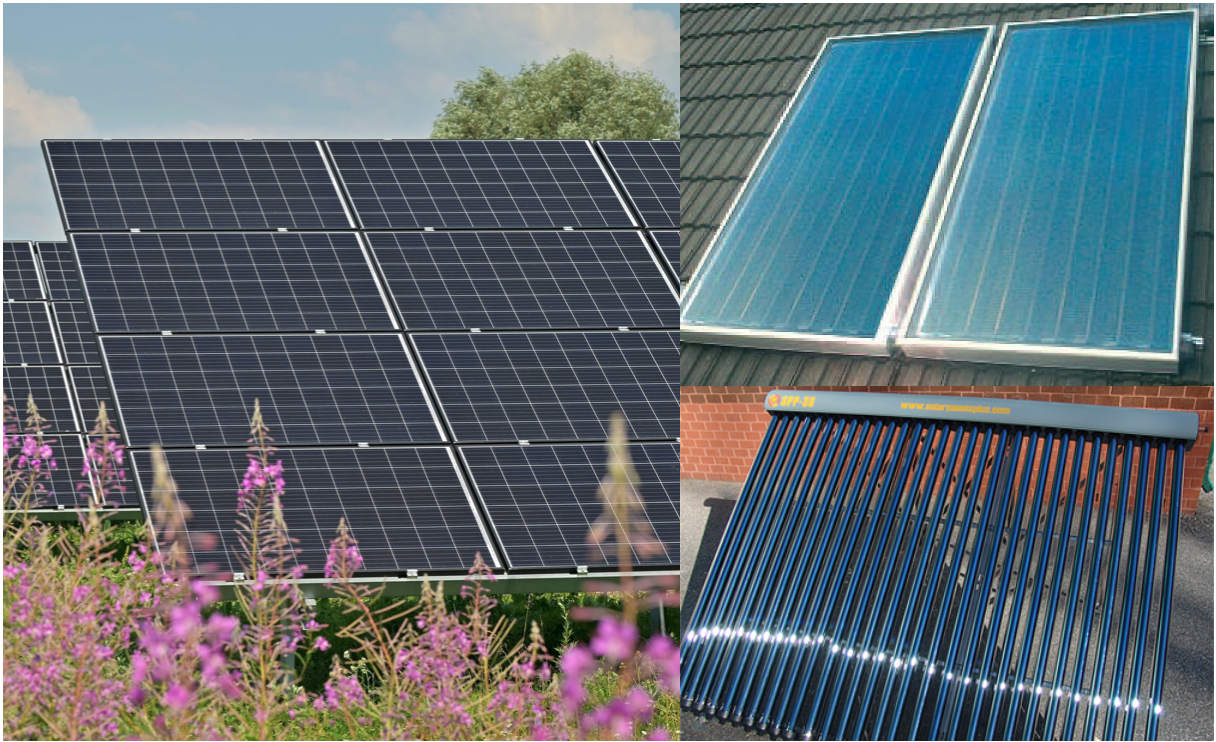 I therefore thought I’d do a quick comparison of solar thermal and solar PV from a cost, practical, performance and environmental perspective.

First, let’s think about cost. The Energy Saving Trust suggest that a installing a typical solar thermal system is between £3,000-£5,000. They suggest that a typical solar PV system would cost around £6,500. This matches other figures I’ve seen. So, taking the higher solar thermal figure, it’s around 30% cheaper than solar PV for a ‘typical’ system

But we also need to think about the savings that the panels would make, solar thermal most commonly replaces gas while solar PV replaces electricity demand. The gas price in the northwest based on the new energy price cap is 7.34p per kWh, while electricity is 28p per kWh. Electricity is therefore nearly 2.8 times as much as gas. While solar PV costs more initially it might therefore make greater cost savings during use.

Solar thermal is between 70-80% effective at converting solar energy to heat, solar PV on the other hand is only around 15-22% efficient. A larger area of solar PV would therefore be needed. Considering our typical system again we’d be looking at about 4m2 of solar thermal and 15m2 of solar PV. This might be pertinent for those residents who were worried about the weight of the panels and a smaller system might also have less impact on heritage values.

However, a solar thermal system does require a bit more installation work than solar PV because you have to attach it to your plumbing and for that a hot water tank is required. If you have a combi boiler solar thermal would be harder to install and require more work. Thinking about my case studies 3 of 16 had combi-boilers or other tankless hot water systems so most of them would be ok.

Now let’s think about the use of the system. Solar thermal systems should generally be sized to meet 70% of your hot water demand and your boiler provides the rest. Solar thermal energy has to be used on site, it cannot be exported. It feeds into the hot water tank though and can be stored for later and on this basis a bigger tank is useful. Professor Stephen Peake suggested at a talk a while ago that if you get too much hot water you could fill the bath and cover it with bubble wrap in the afternoon and it’ll still be warm in the evening!

Solar PV, in contrast, has to be used instantly (unless you have batteries which we won’t go into), or it can be exported to the grid. Exported solar PV is currently paid for at 4.1p per kWh so it’s much better to use it on site to replace your existing demand. Your ability to do this will depend on whether you are in and using electricity during the day, or if you have an electric car that you could charge during the day!

Solar thermal is likely to be replacing gas, or possibly oil in rural areas, while solar PV will replace electricity. The government figures for kilograms of carbon per kWh for each fuel type in 2021 can be seen below.

So, if we’re replacing oil, solar thermal would lead to greater emissions reductions than solar PV but slightly lower if gas. However, it’s a bit more complicated than that because of the continuing decarbonisation of the electricity grid as more renewables replace other forms of electricity generation. By 2030 electricity is likely to have emissions of only 0.09kgCO2e/kWh (according to government predictions) while the carbon emissions from oil and gas will remain fairly constant. Additionally in the summer when the solar panels will be generating the most, the national grid has a lower carbon intensity anyway because of all the other solar PV that is plugged into it.

While both panels may make similar carbon savings now, solar thermal, replacing gas or oil, will probably lead to greater savings over the next 10 years. In addition, decarbonising heating from residential buildings is in some ways more challenging than decarbonising electricity. Heat makes up a much greater proportion of residential energy demand and also needs to be generated on or close to site to avoid transmission losses, unlike electricity which can more easily be moved around. While solar thermal might not make much difference in the winter it can still make a useful contribution to this challenge. We all need to move our heating off gas and oil to reduce emissions, but how fast that will actually happen for the majority of housing is debatable.

Finally let’s think about the embodied emissions from making solar thermal as opposed to solar PV panels. As part of my research, I have modelled the operational, embodied and overall whole life carbon of solar PV and solar thermal panels for each of my case studies. On average across the cases the embodied carbon for the solar panels over fifty years (including two replacements) was 2.86 tonnes of carbon while for solar PV (also including two replacements) was 4.98 tonnes. Solar thermal therefore produced two tonnes less carbon on average than solar PV. It is also likely to require less rare elements and hazardous substances than solar PV which is more chemically complex.

The lifecycle carbon of solar thermal and solar PV can be calculated by subtracting the embodied carbon costs from the operational savings and including the avoided emissions from the solar PV sent to the grid. Solar thermal makes average carbon savings for my case studies of 22.4 tonnes over fifty years while solar PV saves a paltry 5.1 tonnes. This is partly because of the grid decarbonisation and if the heating systems changed in this period to a lower carbon fuel then obviously the solar thermal savings would be less, however they still seem to be quite impressive in comparison to solar PV.

To summarise the comparison: solar thermal might save less money in terms of replacing gas rather than electricity during its use and it requires a hot water tank and some plumbing. On the positive side however, solar thermal has a lower capital cost, will take up less roof space, helps to decarbonise heat which is trickier than electricity, has lower embodied carbon and rare mineral demands and will make greater carbon savings over its lifecycle.

In the next few months, I’ll be providing my research participants with the results of my research on carbon reduction from heritage buildings and if solar panels come up, I’ll be sure, now that they have some more information, to ask them… ‘so, what’s the problem with solar thermal?’