In the past couple of weeks, our colleagues over in the Learning Innovation team published the report of the Digital Working Environment Exploratory Project (DWEEP), an in-practice exploration of the use of virtual environments to support collaboration and hybrid working. The Learning Design team took a lead on the evaluation and reporting, and I had the pleasure of coordinating the effort.

The report itself is great, I heartily encourage you to go and read it. Andrew McDermott’s summary that accompanies it is also a nice accessible hopping-on point, bringing together the key points and narrative of the report into the wider context.

In this post, I’ll take a step back, and reflect on a few of the things that stuck with me from our findings.

We anticipated some accessibility issues going in, due largely to the reliance on visual navigation in the space, and audio-focused communication. What we didn’t anticipate (or at least, to the degree we encountered) was the barrier that navigating and interacting in a 3D virtual space would present to many participants.

As a person who spends a slightly less than healthy portion of their own free time playing videogames, it’s easy to forget that proxying one’s behaviour through a virtual avatar in a 3D space, and the accompanying logic and controls related to that aren’t universally hard-wired in. For folk who haven’t been conditioned to see themselves acting through these avatars, controlling cameras and the like, every interaction can be a barrier; every mis-click that sends them facing into a blank wall is a bewildering and frustrating distraction from what they’re actually trying to focus on.

We noted a slight self-selection bias in those who opted not to participate in the later sessions, based on their previous experiences and frustrations. To compound this, some who were keen to engage found themselves unable to due to their hardware not being up to the job of running the virtual space.

Altogether it added up to an experience that puts up barriers between affecting many who may wish to engage. Saying that, it’s a rapidly developing technology – and there’s a huge amount of money being poured into it – so I would hope to see some of these issues being tackled over the coming years.

The Graphic Media Developers (the GMDs) ran a series of spectacular sessions, one of which I had the pleasure of observing.

When everyone worked in the office together, they would regularly hold gallery events with the individual developers printing off a showcase of their recent work and putting it out in a room for folk to peruse. The team would wander around the room, look at the work and discuss the tools used, the techniques employed, the stories behind the projects or just how darn cool some of it was.

It turned out that this activity translated really well into the virtual environment with members of the team filling sections of an enormous gallery with examples of their work, both static images and in-motion animations. The team moved around freely, discussion was lively and good humoured, and the work itself was spectacular. It was a pleasure to attend, to the point I had to remind myself that I still needed to take observation notes. It felt like a really positive convergence of the technology and an authentic team activity.

Just as we started our testing, the tool we were using updated to allow avatar customisation. The result was that you might be engaged in a serious professional conversation with a colleague with angel wings or dressed as a gladiator. This combined with occasionally unpredictable movement controls made for quite a light and goofy experience at times.

When participating in my own team events, I found the tumult and moments of chaos quite refreshing and levelling. Since the switch to mainly remote working, we often only see one another at our polished and well-behaved best, through the window of an MS Teams call or as a voice behind a nice clean presentation. There’s nothing quite like watching things go entertainingly sideways as a person accidentally teleports into the supposedly to stop, share a chuckle with one another and remember that we’re all fabulously fallible folk.

There’s definitely a benefit in having opportunities to play a bit as a team in unfamiliar waters – to experiment, get things wrong and learn in a nice low-stakes environment. It’s something I’ll try to keep with me and build into my practice more going forwards. 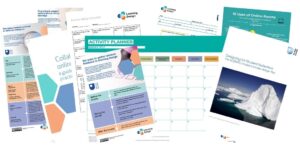 Tweets from the OU Learning Design

The Open University was funded by JISC to develop a methodology for learning design, including tools, practice and other resources.

These resources and other documents form the basis of much of our current practice.

This blog is protected by dr Dave\'s Spam Karma 2: 171 Spams eaten and counting...