As is the usual way of things for me, it was a couple of days before the abstract deadline that I clocked this conference in Bologna next January: The Ecological Turn. Design, architecture and aesthetics beyond “Anthropocene”. A key question they ask and describe is: 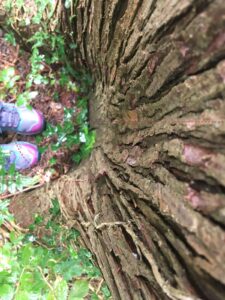 ‘How does the ecological thinking affect architects, designers and the design culture itself?
The Anthropocene has the merit of challenging our conventions in an oblique manner by reconnecting the history of mankind with the history of the Earth. The ecological thinking understood here will not be a generic reconciliation with nature, but a political project, a clash between narratives, a challenge to designers and architects, their materials and their design practices to rethink the way in which human beings define themselves, their images and relationships within the world in which they live. In this respect, design visions can be the tool for activating new relations.’

In my research I often hold the tensions between a political ambition to influence change that reflects a greater degree of ecological awareness and the more formal researcherly and objective ways to explore, understand and explain phenomena. Increasingly I feel conflicted. The question posed here opens up that challenge for designers to be active participants in such change: active; activism; praxis of reform. This tension between passive and active is an interesting one in research terms and in design terms. How political is political? How careful should we be to separate out these different parts of ourselves and the partial world that we engage with both personally and professionally?

I was thinking about circles (circular flows of resources) and the arcs of lifecycle in constructing the abstract for the conference – (an arc being part of a circle). Ecologies is about relationships and flows; about intersections and holistic connections. It’s pretty messy and not easily confined to a process or an approach … and therefore perhaps different from what we have come to expect in design ways of doing stuff. What the current global pandemic has shown is that even with the vast disruption we’ve seen, the disruption needed to flatten out social and ecological wrongs will be far deeper and more widely felt. In these unusual times it is valuable and essential for us to step outside the expected ways of thinking, doing and being and find new routes to solutions we can’t yet imagine.

To challenge the growth paradigm of the Anthropocene era, other stories that show different ways to grow, progress and succeed need to evolve: new ways that connect to, and resonate with, the earth’s own limits and less so with ideas of sustaining economic patterns of consumption. Planetary Boundaries (PBs) analysing Earth System operational limits were outlined a decade ago (Rockström et al, 2009). Recent analyses of PBs shows we are not responding to these signals of environmental harm quick enough and the consequences of environmental change are being increasingly witnessed across the globe (Steffen et al, 2015). Effective change will be in part facilitated by an educational approach based on different roots and logics of people-planet relationships.

It is now more important than ever that our educational institutions become more active and far-sighted  in their response to deep rooted problems through supporting agendas of research and teaching that aim to bring transformative change to peoples lives and livelihoods, to protect the lives and habitats of other species and the ecological systems that sustain us all.

Emma Dewberry is a Senior Lecturer of Design at The Open University (OU) UK. Emma’s research and teaching in this area spans 25 years. She has published in areas such as ecodesign, sustainable education, trans-disciplinarity, sustainable innovation and systems of infrastructure. She co-created the first UK BA Ecodesign course at Goldsmiths College in the 1990s and directed the first UK MSc in Sustainable Innovation at Cranfield University in the 2000s. Her current research explores wisdoms of place, logics of sufficiency and design ecologies. She questions whether strategic design-led change can enable more comprehensively eco-literate and creative responses to ecological crises. Emma is the lead convenor for the Design Research Society's (DRS) Sustainability Special Interest Group [SusSIG]: find out more @thisisDRS