Braving a snowstorm and impending TMA deadlines, three students and a visitor joined us to explore the Imperial War Museum’s exhibits in the North. We investigated the effects austerity measures had on the designs and designing throughout the 20th century. 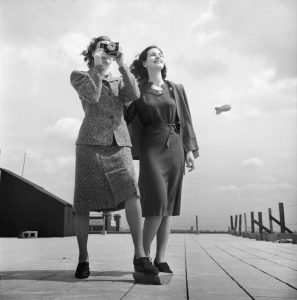 The scarcity of materials and resources, and resulting inventions of new materials and production techniques, was a big theme, as was the attitude to mend and make do with less. Jenny Burke discussed the principles of Utility Fashion design during WW2. Fewer raw materials and rationing measures meant less production of textiles and clothes. Clothes were standardised to reduce waste and cost. The austerity provisions governed exactly what could or could not be used in the manufacture of clothes and shoes. For example, the number of buttons, pleats or pockets, the height of heels, the amount of lace or embroidery. There were no turn-ups on trousers and no double-breasted suits. Zips were not used as the metal was needed for armaments, and silk (for silk stockings) was needed for parachutes. Viscose was used instead. Ladies’ knickers were the only garments permitted to use elastic. 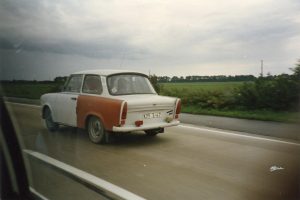 I talked about my experience living with the famous East German Trabant car. The Trabant had a small engine and very little power but a unique body made from ‘Duroplast’, a hard plastic. Due to lack of sheet steel in the GDR a hard plastic was invented from recycled cotton fibre waste and phenol resins (synthetic thermosetting resin) from the dye industry. The lifespan of a Trabant was 28 years and its parts had to be simple, interchangeable, easily understandable and fixable. Many Trabant owners could repair their car or trade skills to do so for other favours. There was a 10-15 year waiting list to buy this car because the production could not meet rising demand. The design of the car and system of purchase was meant to emphasise Communist values, de-emphasising the value of individual possessions. I don’t think that this has worked as intended.

We discussed what principles of utility design could address austerity now and in the future. The sharing, renting and leasing economy was considered in being able to change people’s minds to move from individual to shared ownership of things, like cars or tools. The relationship of the individual and the community was discussed. An increased fragmentation means that the ways communities have supported each other, i.e. through generations in a family and villages, need to be rethought to address austerity and to reduce, reuse and repurpose scarce or expensive resources in the future.