In everyday speech, people may say that a restaurant has a very romantic atmosphere. Likewise, the atmosphere of a shopping centre may be said to be vibrant. It may be difficult so explain exactly what such an atmosphere is or how it is cultivated but we can be certain that a design expert of some kind or another invested considerable time and though to get the atmosphere of the latest dance venue in town just right. But what about cities? Do they have an atmosphere too? Is it possible to do something to change or even design urban atmospheres?

Looking at the recent ‘Festival of Creative Urban Living’ in Milton Keynes ( https://afcul.org/ )as an excuse for reflection, we saw how it used its public programme of new commissions, exhibitions and conferences to ask and explore the question ‘how do we live well in cities – now and in the future?’ Our favourite part of the festival was the “Utopia Station”, a rather colourful, odd-looking and impossible to miss structure that introduced an element of futurism into the atmosphere around it. However, we could also say that the atmospheric changes introduced by the station were limited in time and space. The festival lasted three weeks and notwithstanding how colourful the Utopia Station was it could only be seen by visitors and those in the surrounding streets.

On the other hand, the ideas and activities that took place within the station arguably had a subtler but more lasting impact in the atmosphere of the city. Inside the station one could find cues and inspiration for thinking about cities and there was even an ‘idea protocol’ for thinking about their future. The Utopia Station Team took ideas from visitors and  transformed them into drawings and models which were incorporated into an imagined version of the future city Milton Keynes.

Re-shaping a city is easy when it is a plan or a model. Reshaping an actually existing city is far more difficult but the utopia station was doing it in a small but meaningful way, not by itself but as part of the many activities that are constantly taking place within a city. Every time a new gallery is opened, a smart city pilot is launched or there is a festival of robotics or of urban living, the atmosphere of the city is changed. Many of those activities are facilitated by local authorities and the choices they make do indeed have a powerful influence on the atmosphere of a city. They may not fully control the atmosphere but in a way they are curating it. In the end, however, the festival would not amount to anything if it was not for the citizens contributing their ideas just as the festival of robotics would not go anywhere without the scientists nor the gallery without its curators and artists. The creation and re-creation of urban atmospheres is a collective endeavour.

As a closing reflection on urban atmospheres: Festivals, events, living laboratories and the like certainly have an impact on the atmosphere of the city but they do not take place in a vacuum. City materialities and histories matter and visions about the future of a city must be grounded on an understanding of its buildings, roads, infrastructures and past.

On that note, we would like to mention an event to which we are not affiliated in any way at all but that we find intriguing and quite related to the notion of atmospheres. The Milton Keynes Discovery Centre is hosting a ‘New Town Heritage’ workshop to support local communities in the exploration and documentation of the social histories of New Towns –a way to reflect about the stories of the people who live here, the impact of the buildings on daily life and what is it like to live in a city built from scratch. Although a toolkit with “heritage” in its name might be expected to dwell in the past, one of the ultimate goals of the project is to give communities tools to shape the city’s future planning and growth. For further information, follow this link: https://www.eventbrite.co.uk/e/new-town-heritage-explorers-workshop-tickets-80023218601 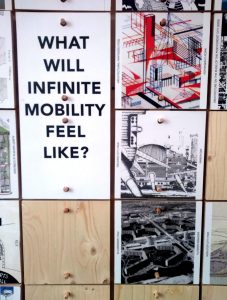 Prior to academic life, Matthew worked for 11 years as a professional spatial planner specialising in urban regeneration and sustainability. He returned to university in 1999 as Research Assistant on a UK Government funded project and completed a doctorate in Innovation and Sustainability. Following an appointment as Lecturer at Cranfield University in 2003, Matthew joined the Open University in 2009 and is now Professor of Innovation. Matthew’s research interests are in the governance of innovation with specific reference to two inter-related topic areas: 1) the development of service orientated business models and the opportunities this provides for product service system innovation in cities 2) the emergence of smart city initiatives and how these may improve the sustainability of systems such as transport and energy which underpin every-day life in cities. Matthew’s work in these areas is founded on the view that innovation is a situated socio technical process, shaped by various logics which are the outcome of struggles between local and non-local relations.