Back in the 1930s, the London Brick Company established the largest brickworks in the world across Bedfordshire. Over 2,000 people were employed here at this time. At its peak, there were as many as 162 chimneys, built on the clay soils across Marston Vale, linking 8 villages including Stewartby.

Stewartby itself had 32 chimneys each standing 70 metres tall. These chimneys were imposing industrial landmarks on an otherwise rural landscape.

Peak production was reached in 1936 when some 500 million bricks were made. This equates to the bricks required to build 61,154 houses in a year (based on an average 8,176 bricks per house). Later, intensive brick production helped Britain replenish the housing stock following World War II. In this historic context, one wonders how much of England’s housing stock was built with bricks from Marston Vale? 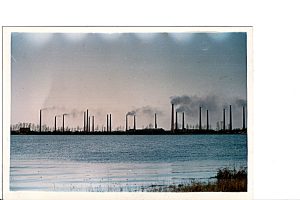 The amazing productivity of the 1930’s was achieved through introducing a new technology called a dragline. This huge machine excavated large quantities of clay -Oxford Clay- to be delivered on a conveyor belt to the brickworks. Once on site, the clay was moved from a grinding pan through a heated piano wire screen, then pressed into bricks, ready to be fired at 1,000 degrees Celsius in a Hoffmann kiln.

The bricks called Flettons were produced with Oxford Clay,  discovered in Fletton, Peterborough. This is called ‘the clay that burns’  due to a high percentage of organic matter that self-ignites when the kiln reaches specific temperatures.  The clay itself becomes fuel! Compared with other clays, this unusual property reduced the need for fuel and resources (energy, human, time), and therefore improved performance efficiencies and economies.

As part of the process, the chimneys needed to be designed to be as tall as possible to contain and remove hot gas emissions from inside the flue at the fastest rate. The hotter, lighter gases produced an accumulated pressure differential (a draft), which pushed gases up the flue, out the chimney, and across the shire!

Perhaps unsurprisingly, the brickworks struggled to meet emissions standards (particularly for sulphur oxides) and finally closed in 2008. However, it is notable that the National Brick Development Association aims to address emissions and other environmental concerns with the “2016 Brick Sustainability Report“.

Nonetheless, the brickworks across Marston Vale had been in decline for some years prior to closure. Apparently due to a lower demand for bricks. Ironically this coincided with a decade of increasing shortages in Britain’s housing supply.

Today only 4 chimneys remain standing or perhaps we should say leaning! Once the chimneys cooled, the wetter clay soils caused subsidence. The same clay soils used to make the bricks probably undermined the foundations of the chimneys. 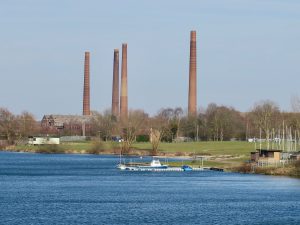 So now we have the Leaning Chimneys of Stewartby – bowing to a bygone age!

The BBC report that demolition has been agreed by the Council on safety grounds. Historic England contests this, seeking to preserve heritage. Meanwhile Hanson UK, the owners, want to build 4,000 houses on-site once the chimneys are down. But Stewartby’s remaining 4 chimneys and 2 kilns are listed for conservation. So perhaps it’s not time for farewells?

One thing we know now, is that any houses built in the vale of the chimneys will not be built by the bricks of Stewartby!

Find out more on brick making from the Millennium Clutch project, and from the “Changing Landscapes Changing Lives” History Archive at the Forest of Marston Vale.

Brian Kerr (2014) An Unassuming County: The Making of the Bedfordshire Countryside. Published in England by EVENTISPRESS.