The UK Government is currently consulting on the Future Building Standard which includes updates to parts of the building regulations dealing with energy use in buildings (MHCLG, 2021). The built environment is a major user of energy and contributor to carbon emissions so tightening standards for new buildings and retrofit is an important step for efforts to meet our climate goals. (We won’t mention the fact that there used to be a policy that by 2020 all new buildings were supposed to be net zero…).

The full consultation is 130 questions long and covers lots of different areas. If we tried to look at them all we’d probably still be here by Christmas, so in this post I’m just going to focus the question of which metrics should be used to headline the new standards, examining two examples from other countries around designing energy standards for buildings.

There are lots of different metrics that could be used to measure the energy demand in buildings and all of them have their own benefits and challenges. The current proposal is that the main metric to measure energy demand should be ‘primary energy’, with a second metric of carbon emissions.

A not very encouraging sign of how well primary energy is understood is that BRE have felt the need to release a a special briefing note in response to the consultation to explain what it is and how it’s calculated… They explain that primary energy is:

‘Energy from renewable and non-renewable sources that has not undergone and conversion or transformation process.’ (BRE, 2019).

Or perhaps more clearly, it’s the energy contained in raw fuels which can then (subject to losses) be converted into more easily used energy such electricity and distributed, eventually ending up being used in a building as ‘delivered energy’.

A number of organisations such as LETI (London Energy Transformation Initiative), the UK Passive House Trust and the AECB (Association of Environmentally Conscious Builders, feel that primary energy is not appropriate as the main metric for use in the regulations, they argue that it is:

So in summary they are fairly comprehensive in their disapproval! They are instead suggesting that the main metric should be Energy Use Intensity (EUI) in kWh/m2/yr, as this is simpler, easier to understand and much more closely related to building energy use (LETI, 2021).

A couple of years ago there was a BBC News item about how the government was considering the potential to have a bottle deposit scheme as a way to cut plastic waste. The article quoted a parliamentary spokesperson saying that a group of MPs had ‘crossed the north sea on a fact finding mission’ (it may just be my background in military history but for me this conjured up images of a heroically cold and hazardous expedition, probably by longship…). The aim being to investigate how the Scandinavian nations managed similar schemes. 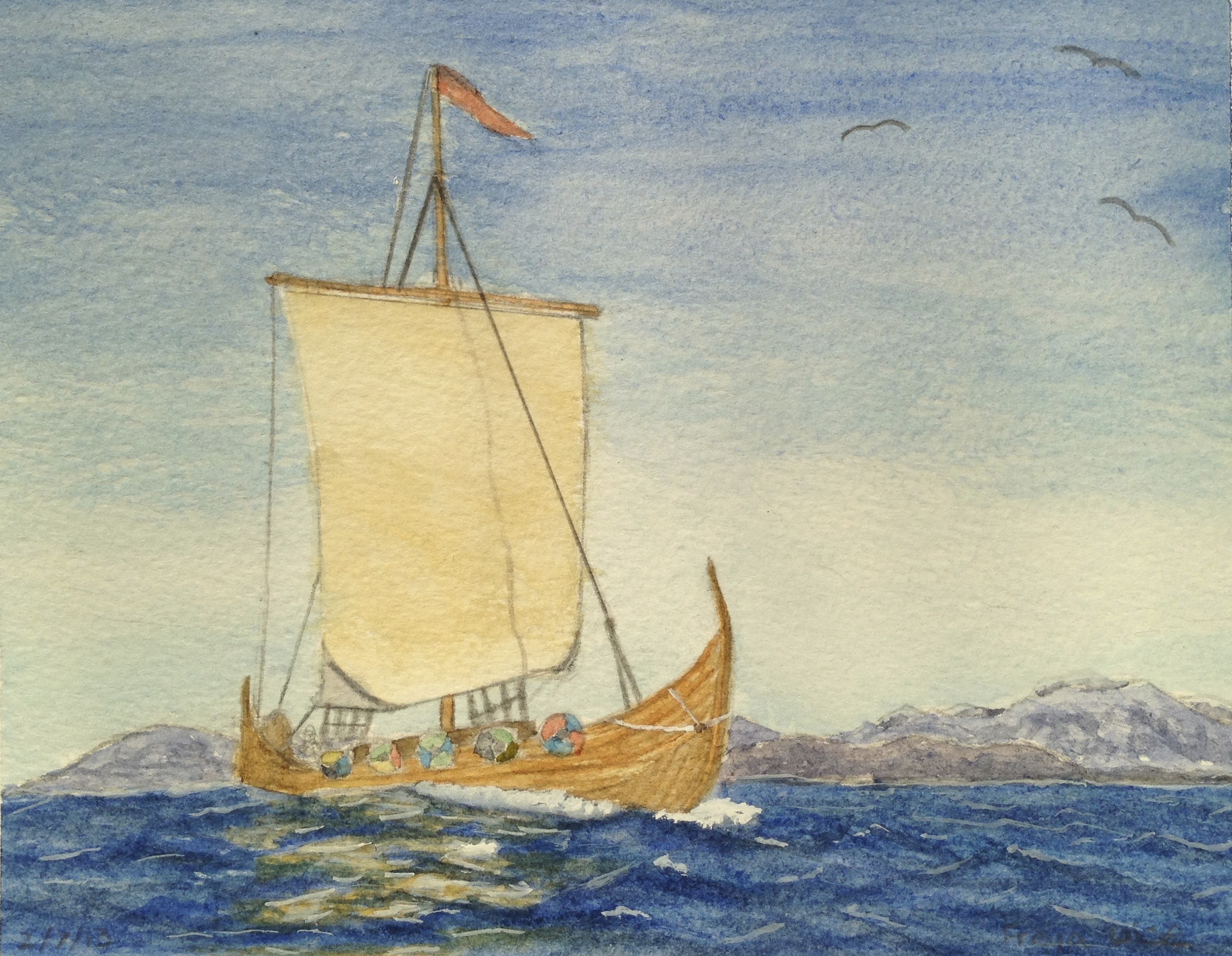 Following the example of those brave MPs I would therefore like to metaphorically ‘cross the north sea’, and have a look at regulatory approaches in Denmark, then at a voluntary scheme in the Netherlands.

Firstly, let sail to Denmark, which (according to the Danish government) has the ‘the strictest building regulations in the world’. (Gram-Hanssen et al, 2018)

Danish building regulations similar to UK ones have minimum performance standards for key elements of building fabric, as well as ‘functional requirements’ which stipulate overall energy performance based on energy use per meter squared of floor area, the standard LETI are proposing. Danish standards apply to new and retrofitted buildings, although there is some flexibility on retrofit levels. Again similar to the UK, compliance is assessed through a modelling tool that assumes standard temperatures and behaviours. So far, pretty similar, the interesting bit is the implementation and it’s effect.

In 2008 the Danish government set out the long term plan for the regulations:

In 2010 alongside introducing the mandatory 25% reduction, they also introduced the 2015 values as a voluntary low energy building standard and this was repeated in 2015 for the 2020 standards. This phased bringing in of the standards has been successful in helping the building industry respond to the strong policy signals and to adjust their practice accordingly, the voluntary standards have also encouraged earlier take up of the more challenging standards.

If buildings comply with the voluntary standards they get a special low energy badge and everyone knows that people like badges… In 2015 just over half of new builds met the low energy standard (ie the 2020 regulations). So the implementation has had a good effect and by 2019 residential heating energy per m2 had dropped by 20% compared with 1990 (Danish Energy Agency, 2020). 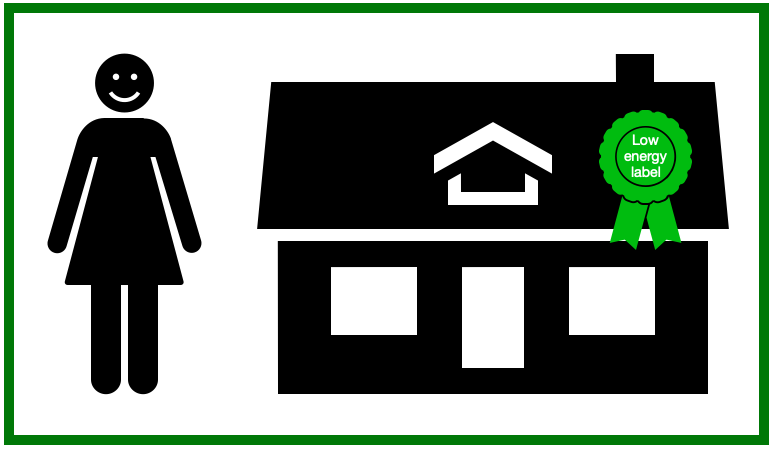 However in this same period heated floor space had increased by 25%… The net result being that there has been no actual reduction in energy used for heating in Danish homes, despite ‘the strictest building regulations in the world’. 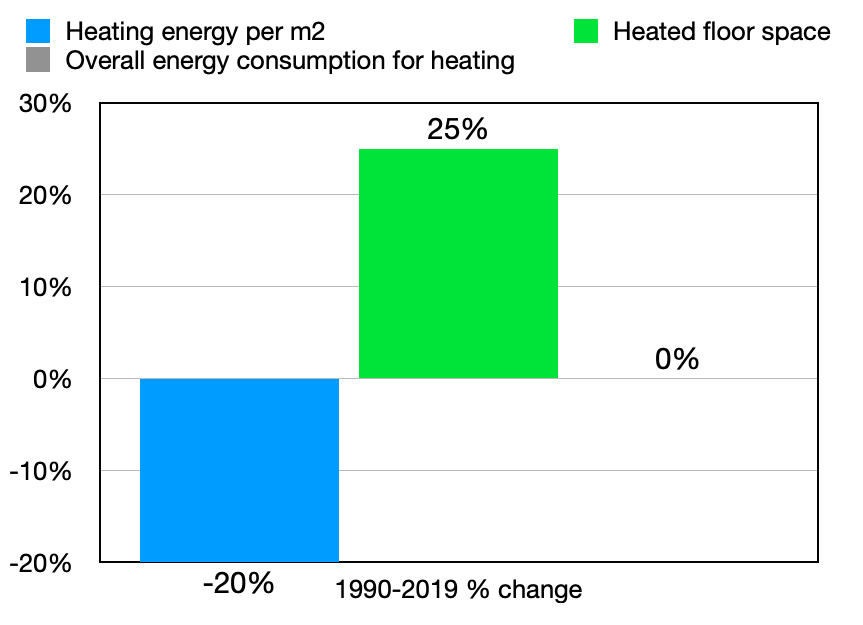 This therefore is a challenge with using energy per m2 as a key metric, it can obscure total energy consumption. In addition with this metric, stringent regulations for building envelopes can actually encourage larger buildings as the ratio of external envelope to floor area decreases with bigger builds making it easier to meet regulations. Much like incentivising gas use bigger buildings isn’t really something we want to encourage!

Energy use per floor area can therefore be a useful metric and is much more intuitive for most people that something like primary energy. However if there is too much focus on it as a metric it can obscure the overwhelming need to reduce overall energy consumption, not just relative consumption. It therefore probably needs using alongside other metrics to help highlight potential discrepancies.

So, lets sail southwards now and visit the Netherlands.

A Dutch approach to deep retrofit

One of the challenges with most building standards, including British and Danish offerings, is that they measure compliance based on energy consumption calculated by a model, which makes standardised assumptions about building use. These models have been shown to tend to overestimate energy use in old buildings and underestimate it in new, apparently energy efficient buildings (see my previous post on holistic heritage approaches) (Gram-Hanssen et al, 2018: Majcen et al, 2013: Galvin & Sunnikka-Blank 2012). This is one of the main contributors to a significant ‘performance gap’ between predicted and actual energy use. They also only include ‘regulated loads’ (heating, hot water and lighting) and don’t consider ‘plugs loads’ such as appliances and electrics.

On domestic Energy Performance Certificates (EPCs) in the UK, it may seem rather odd, but the total calculated energy use of the building is not currently provided. The primary energy is, an estimate for heating is, as are carbon emissions, but there is no overall figure that people can relate to their energy use. Although maybe this is so that they can’t easily work out how different it is from their actual usage… 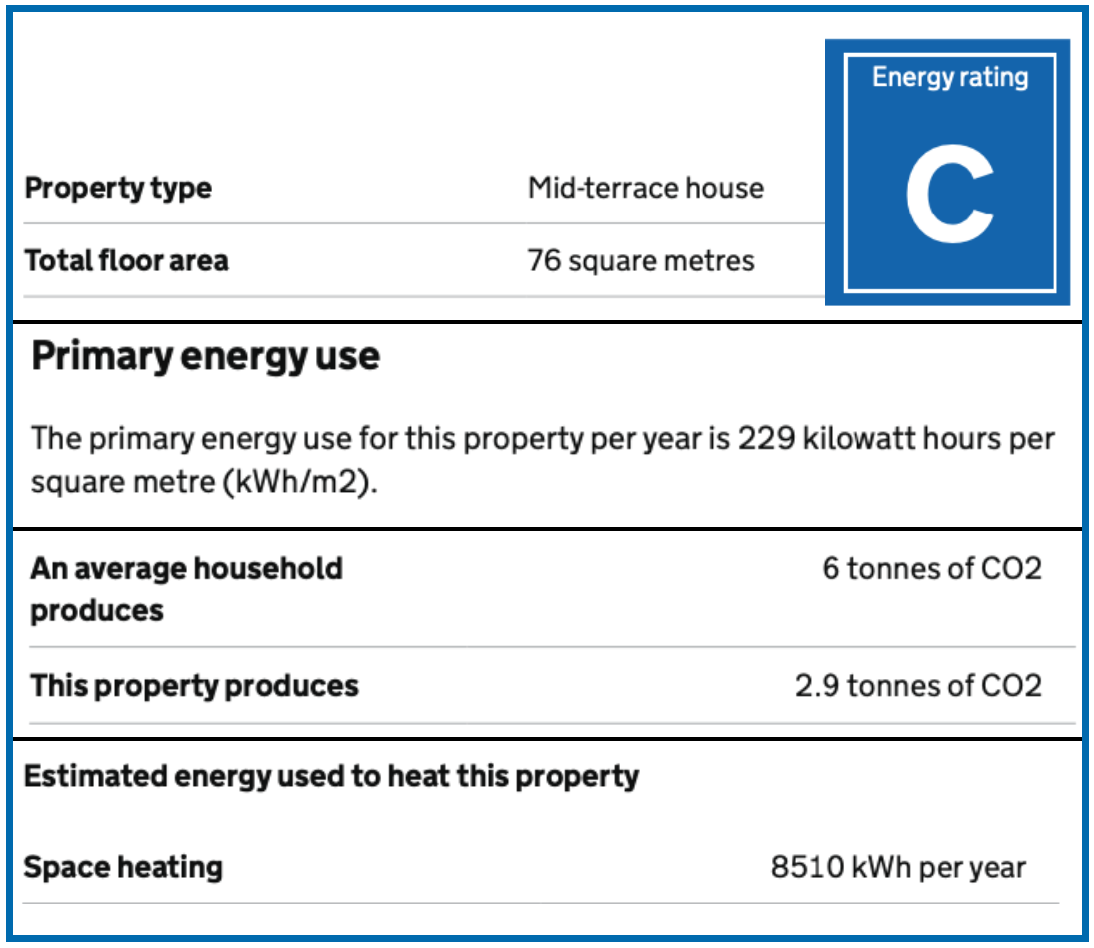 So, how much energy does the model think this house uses????

In 2013, in the Netherlands, an approach to net-zero deep retrofitting called Energiesprong (translates as Energy Leap) was piloted. It has gone on to be successful and is beginning to expand internationally. The cost of the retrofit is funded by the reduction in energy bills post retrofit with residents paying an ‘energy service charge’ rather than energy bills (Fawcett & Topouzi, 2020). This is similar to the now defunct UK Green Deal, which failed partly because predicted savings did not materialise.

However one of the important innovations with Energiesprong is that the energy performance is guaranteed for 30 years and, most importantly, this is based on actual energy use, not modelled energy use. There are over 5,000 Energiesprong buildings to date, and over 20,000 planned, mostly in the Netherlands and France (Energiesprong, 2021). Regulatory changes are required to make the Energiesprong finance model work and to allow charging for ‘energy services’ rather than direct energy provision.

LETI have been campaigning for the inclusion of plug loads in a total energy metric and for provision to be made for the monitoring and verification of in use energy to become part of the UK building standards, although this is an area that the government seem fairly intent on avoiding.

So, having crossed the north sea in a quest to explore some alternate approaches it’s time to return from our voyage of discovery.

The literature seems to agree that there are no perfect metrics and that the best solution is probably a combination of multiple metrics rather than single headline figures (Fawcett & Topouzi, 2020). However if we have to have a headline metric then something other than primary energy seems like a good idea in terms of transparency and understandability. It would also be very positive if there was an increased connection between actual energy use and predicted usage.

If this article has whetted your appetite or you have even a small interest in sustainability in the built environment I would encourage you to respond to the government’s consultation using the quick yes/no response guide that LETI have provided for the 17 key questions (you can leave the other 128 blank!). This can be completed in ten minutes but the window of opportunity is closing rapidly as the consultation closes at 11.00am tomorrow! (13th of April). Here is the link: https://www.leti.london/part-l

If you don’t get to read this article before the closing date, then hopefully you will have still found some of the examples interesting and, failing that, at least you will have learned how to say: ‘Energy leap!’ In Dutch, which has got to be useful!