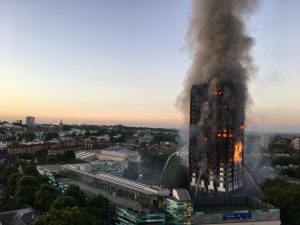 The terrible fire at Grenfell Tower has provoked discussion among architects. Where does the blame lie? With the architects who drew up the plans for refurbishment, with the council and management company who insisted on costs being cut? With the contractors and subcontractors involved in carrying out the work specified or with the companies producing the materials used?

Until the results of the investigation and enquiry are published it is difficult to say where fault lies but it is likely to be found that the picture is complex and points to failures of systems as much as individual actions. This is the nature of the world in which design now sits. The poet John Donne wrote “no man is an island entire of itself’, the same is true of design, no design exists in a bubble. Even the humblest design is the result of a chain of resource use, materials processing and energy usage, each of which has an impact on the environment, before the design is even used and finally discarded. Designers have a responsibility to consider these issues as best they can when they design, whether the output is a building, a transport system or a toothbrush holder.

However, building design bears a particular responsibility because buildings are complex entities, organisms, containing a rich mix of services, systems and products, as well, and most importantly, as people. Buildings affect, not only their inhabitants, users and visitors, but also the wider context in which they sit. The sight, shadow and footprint of buildings shape the look and feel of an area whether positively or negatively. Both interior and exterior are important for the wellbeing of all those who will live, work or visit the area. We have seen, in the Grenfell tragedy what can happen when attention on the exterior compromises life in the interior. Is architecture the problem here, is it more concerned with style rather than substance? It would be simplistic to believe that is the case. Architects have an understanding of buildings that spans from points of detail to grand overviews. Like all designers, their work integrates knowledge from many different spheres; architects are used to working with engineers and experts who can advise on technical issues outside of their realm of knowledge.

However, the reality is that once handed over, a design may no longer be in the control of the designer. The process of implementation, taking a design from the page (or screen), to its realisation as a building, product or system, is very complex. So much so that the process can become like a game of Chinese Whispers, where, at each step the design is re-interpreted according to the understanding of those involved. This is not always a bad thing, the expertise of others can often spot issues that the designer has not thought of and find ways to deal with them. However, each step of communication brings with it the risk of getting further and further from the original intention and losing sight of the overall goal. Where decisions are dispersed, as they are on a large building project with many subcontractors, then it is a very difficult task to have an overview of the cumulative effects of many decisions and even more challenging when changes to plans are made to reduce costs. Each individual decision, about insulation, pipes, cladding or compartmentalization, may carry a certain level of calculated risk, but it is the combination of these, when the unexpected happens that creates the catastrophic result. The whole becomes greater than the sum of its parts. Communication between everyone involved becomes crucial.

Sadly, it seems the knowledge existed that could have helped to avoid the Grenfell tragedy. Knowledge about building design, building materials and fire has been growing steadily for decades both in academia and in the construction industry. For example, research carried out by Chinese academics (Sun 2013, 2016) following a number of catastrophic high rise fires in China has looked at these issues drawing together existing knowledge about the behaviour of materials, the design of stairwells and compartments and the effects of climatic conditions, as well as looking at the spread of fire with insulation materials like those found in cladding. Likewise, in Winter 2016, a report from Probyn Miers, a specialist architectural company on the fire risks of cladding in the UK presciently concluded:

“Unless something radical is done, such as national retro-fitting subsidy schemes, it seems inevitable that there will be further fires involving aluminium-faced polyethylene core panels. Nightmare scenarios include multiple-fatality building-engulfing fires as in China, or given the proximity of towers in some districts, the ignition of neighbouring buildings’ cladding from an external cladding fire, or disintegrated burning panels igniting the roofs of lower buildings adjacent.”

Among the questions asked at the inquiry on Grenfell Tower must be how can all those involved in the design and construction of both buildings and building products learn from this tragic event and existing knowledge, to inform the decisions that they make and ensure that it is never repeated.