Sometimes something happens that represents the tipping point between simply enhancing the design of an existing product or service and when a transformative redesign happens. I am wondering if we are about to hit this for urban transport systems. The mo 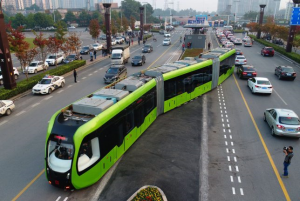 dern tram is frequently seen as a core high quality public transport system, but its basic design configuration goes back over 100 years – i.e. a vehicle that runs on steel rails with overhead power lines. This design means that modern tram systems are expensive to build and inflexible as their routes are fixed along their tracks. In emergent economies with rapidly growing mega cities there simply isn’t the money for modern tram systems, and even if there was, there is great uncertainty as to where they should be built. In just a few years, the focus of development may shift, travel patterns alter and a tram line, that has taken years to construct, will be redundant upon opening. Guided buses (such as in Cambridge, Eindhoven, Luton and Adelaide) and busways (such as in Curitiba in Brazil) have developed, and these offer flexibility to vary services and routes as demand changes. However, these still depend predominantly on diesel bus technology and generally have not provide a step change quality of service to attract car user.

There are a range of emergent smart and autonomous vehicle technologies that could be applied to produce a revolutionary improvement to public transport services and represent a design transformation. Overhead lines can be eliminated by using station inductive charging for battery electric traction. Buses using this system are already operationally and commercially viable (Miles and Potter, 2014).  Combining inductive charging with electronic guidance rather than traditional rails means that enhanced quality battery electric vehicles can now fulfil the function of modern trams without the need for costly and inflexible track and overhead line infrastructure. This considerably reduces the cost and time taken to introduce a high-quality public transport system. It is also a design that is amenable to autonomous operations as technology advances; it could be applied partially (for example first on segregated sections) and then, as autonomous driving in mixed traffic is proven, more generally.

While city authorities in Europe and their mainstream providers are showing little shift from traditional tracked and powered tram LRT systems, the Chinese have started to work through the logical implications of new smart technologies for urban public transport designs. The picture above looks like a modern tram, but look again because it isn’t! Implemented remarkable quickly, an ART (Automated Rapid Transit) service entered trials in the city of Zhuzhou in the autumn of 2017 (Newman, 2018). These battery-powered electric vehicles are inductively charged every 3 kilometres at station stops and use optical, GPS and Lidar guidance rather than rails. At present the vehicles are manually driven, but it is designed to be upgraded to autonomous operations as the technology becomes available.

ART entered operational service in Zhuzhou in 2018 and in a matter of months entered service in a number of other Chinese cities. It is now being trialled in Qatar, who authorities are looking to have a whole metro system up and running for when they host the World Cup in 2022.

Is this a tipping point for the redesign of an urban public transport system? Perhaps it should be no surprise that this redesign impetus  is coming from the emergent economic superpower of China. The old cities of the west cling to their 100 year old technologies. They have a whole professional  engineering and cultural infrastructure sunk in the old tram system design. Is that about to be overturned? Watch this space……

Stephen Potter is Emeritus Professor of Transport Strategy in the School of Engineering and Innovation at the Open University. His research includes work on the diffusion of cleaner vehicle technologies, low carbon transport systems and more sustainable travel behaviour. He has contributed to several aspects of Milton Keynes’ emerging smart city programme. He co-ordinated the University's contribution in the Milton Keynes Electric Vehicle project that successfully bid for a grant under the Plugged in Places programme to develop public electric car charging infrastructure. He worked with Western Power Distribution in securing the £16m smart grids Project Falcon (with the OU having a £200,000 contract for stakeholder engagement work) and headed the OU's contribution to the HEFCE Catalyst MK:SMART project. He has contributed to other local low carbon projects, including writing on the MK electric bus and participating in the MK 2050 Vision project and is presently working on trials designing inductive charging for electric vehicles. Stephen has taught on several Open University design, innovation and environment modules (most recently Energy for a Sustainable Future, Environmental Management and Innovation: Designing for Change).