Design education at the OU encourages students to draw inspiration from everyday experiences. I learned this week that revisiting the history of your lived experiences is also an excellent source for design inspiration.

I grew up in Magdeburg in former East Germany, in a newly build neighbourhood in the 1980’s. In 2022, I returned to my former home and walked along ‘my memory lane’. I revisited the places where I learned, lived, and played as a child and teenager. I observed the physical, social, and environmental changes over the last 20 years.

In the 1980’s, my neighbourhood saw an influx of young families when a large estate of blocks of flats was built. These are called ‘Plattenbauten’ in German because they use modular prefab concrete blocks or ‘Platten’. The German reunification in the 1990’s had a large impact on my youth neighbourhood. Many families apparently had worked for the ‘Stasi’ (the East German Secret Service) in the close by ‘Stasi Knast’, a prison that was opposite my school (image below front) and is now a historical site. I sometimes saw prisoners walking in the courtyard from the window seat in my classroom (yellow building in the background). In the early 2000’s, the blocks of flats emptied out quickly and were either teared down or served as temporary accommodation for refugees. 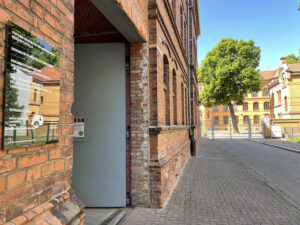 The temporary refugee accommodations turned into permanent housing for the new immigrants. Rent being affordable, my parents still live in this neighbourhood today. This mix of old and new creates a diverse and lively neighbourhood that occasionally sees conflicts of worldviews and behaviours arise, but also new alliances being formed. My dad sometimes talks to ‘the boss’, he calls the man who is seen managing goods and people out of the opposite block of flats from where my parents live. You want to be on his side, my dad tells me. When I met the boss, I was offered a delicious, freshly baked deep fried sweetened dough. That was our communication, eating together.

The changes in the design around these blocks of flats, however, do not provide for many opportunities for friendly encounters. When the first immigrants arrived, a high fence was erected, right through the middle of the shared green space between the two opposite blocks of flats. On one side the immigrants, on the other the then mainly German tenants. Walkways or shortcuts between blocks of flats were cut off. People were discouraged from mingling, making chance encounters or friends by design. I observed my son playing football on the one side of the fence, and he was observed by the children on the other side of the fence, but they couldn’t easily join in. One contributor to this inhibiting design intervention was the change to private ownership of the blocks of flats by different landlords. While the tenants would like to tear down the fences, the law prevents them to do so. A neighbourhood, which was once build on socialist ideals with shared spaces, that no doubt supported neighbour snooping and state control, are now harmfully retrofitted to serve norms of capitalists control.

Fences and private ownership not only diminish shared spaces and divide community, but they also create a negative environmental impact. Not far from my parents block of flats, just across the ring road, a slightly more affluent transformation has happened. Private ownership of individual flats which comes with a piece of back garden on the ground floor makes the impact of privatisation and consumerism visible. For example, three neighbouring private gardens divided by just a low fence between them owned each a trampoline. The combination of private ownership and high visibility to the neighbour’s garden must fuel an unhealthy competition and consumerism. Families buy the same gadgets and tools for each household which could easily be shared across. 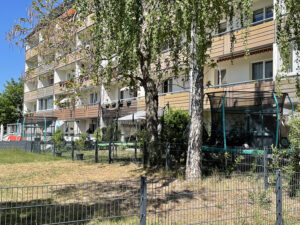 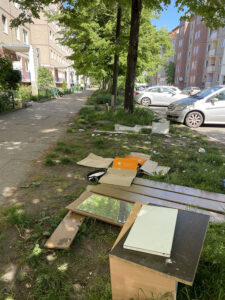 While the fence regulates private ownership and fuels unsustainable consumerism, a lock on the recycling bins controls environmental stewardship. The refuse and recycling bins are shared across blocks of flats and located centrally between them. One general key is used for the entrance to your house and to access the individual bins. A possibly unintended consequence of this rather odd arrangement is littering on the roads with items that could be recycled. The strict German norms and behaviours around recycling seem not to be shared by all neighbours, was my first observation, but I soon saw that the neighbours use different strategies for recycling and reuse. One day I noticed a heap of discarded electronic household items littering the roadside, from which all the reusable items were taken. The other day the remains were discarded in the rubbish. Instead of throwing out the recycling and putting a lock on it, the neighbours’ strategy was to take time to find recyclable parts and discard the rest. This caused the littering the roadside intermittedly because there was no designated space for this activity. Could there be? While I felt initial anger walking along heavily littered pathways, I saw that the environment was just not designed to facilitate behaviours of reuse that the new neighbours employ. 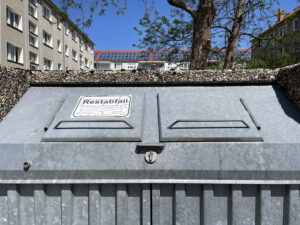 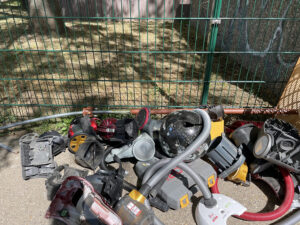 Walking the memory lane caused many more emotional reactions, I felt puzzled when I walked along endless weed infested wastelands where once blocks of flats stood. I felt joy walking along a tree lined pedestrian pathway with trees I witnessed being planted 30 years ago when I was a child. I felt fear visiting a park whose lake had dried out and I felt glad seeing another park that was previously unused finally being used as a meeting point for families. Revisiting your lived history is tainted by emotions, and it can be difficult to utilise these feelings as starting points for design inspiration. But I revisited these spaces again and again, I questioned the origins and dynamics behind what I observed, and reflected on human design interventions, which helped me to gain some distance to an otherwise emotionally loaded topic.