We had our first family-oriented qualification event on Sunday, 23rd of February in London. We went to the Design Museum and made some puppets with our families and visited the ‘Moving to Mars’ exhibition. My daughter loves hedgehogs. So, this is what we aimed for as a puppet. 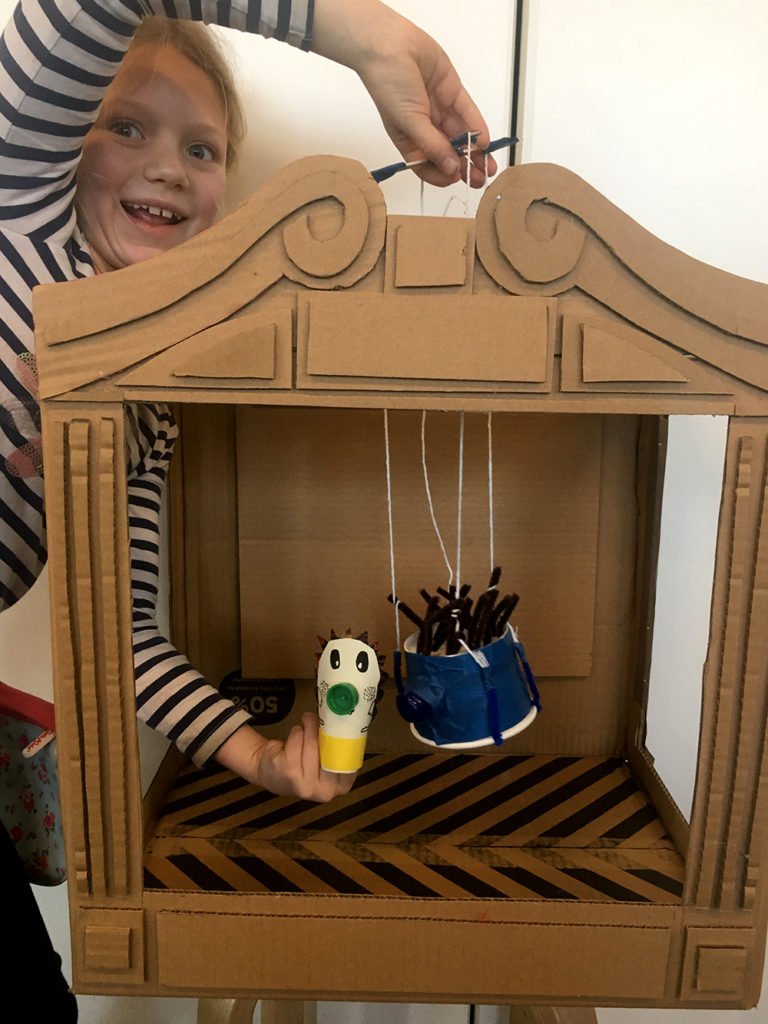 My daughter commented in the video demonstration of the finished puppet, that mum did most of the hedgehog puppet, because it was complicated to make.

This is a common observation in many children workshops I go to with her. If it is a very specific object the workshop asks them to do (which often gets changed slightly), it is the parents who usually execute it. Often the activity is aimed too high. It is then up to the parent to have the skill to help children to do a complicated object by themselves. Children develop high expectations by what they see as examples (usually facilitator made) and if it doesn’t work out quickly, it is for the parents to keep them focused and engaged, or if time is short at hand, parents end up doing most of it themselves. I believe many parents would benefit from some design facilitation skills. And seeing it in myself, under time pressure, this is not something that comes easily to a parent. 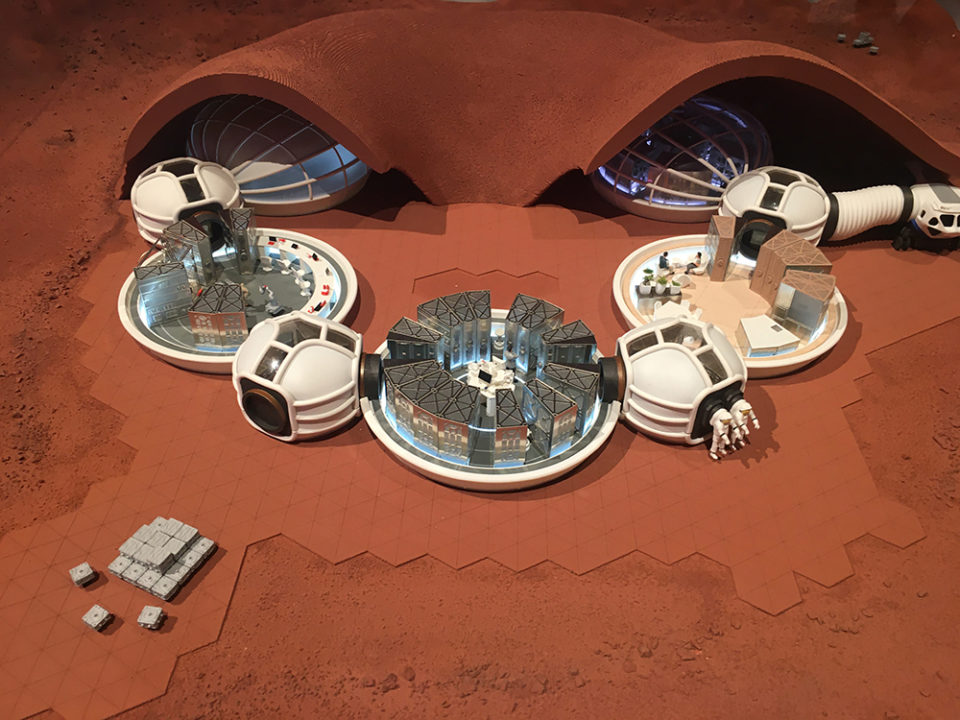 We decided to go to the ‘Moving to Mars’ exhibition after the workshop. The exhibition won’t reach the levels of immersion that you might get from reading Andy Weir’s novel The Martian (or watching the movie) http://www.andyweirauthor.com/books/the-martian-mass-market-mti-mm, but it carries you well through the levels of investigation and invention that happened and are currently ongoing. Even though my 8-year old didn’t really let me read any label, you get a good gist by just ‘going with the flow’. The exhibition is sprinkled with visions of Mars from the past, introduces you to current rover prototypes and then transports you onto the surface of Mars in an immersive video installation. After that, you move on to the future of making ‘Moving to Mars’ actually happen. This includes the transfer to as well as living on Mars. I was most interested in the architecture and interior of the living quarters of future Mars colonies. Interestingly, the designers all think along the lines of surface living in dome-like tents. Looking at recent cutting-edge OU science in this area shows that living conditions in the “deep subsurface — from metres to kilometres in depth — is potentially the largest, longest-lived and most stable habitable environment on Mars.” http://www.open.ac.uk/research/news/new-insights-mars. Maybe it would be worth taking a tunnel digger onto Mars with you instead of 3D printing machines, or probably in addition to?

These two images show the 3D printer and sewing machine shown in the Mars exhibition and a page of my boy’s favourite book about construction sides with a tunnel-digging machine. 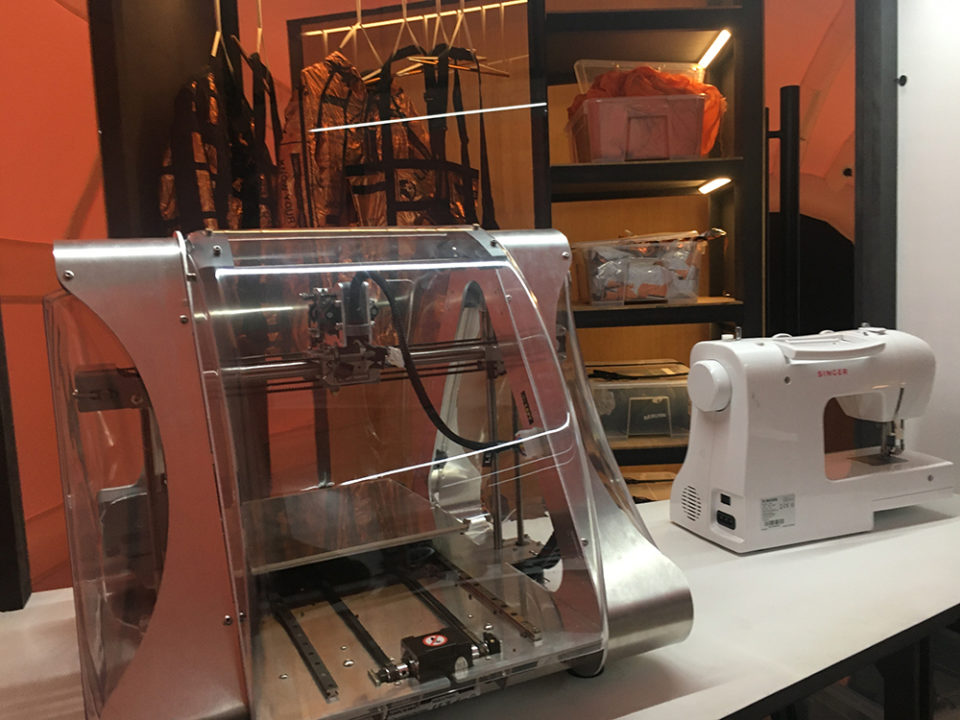 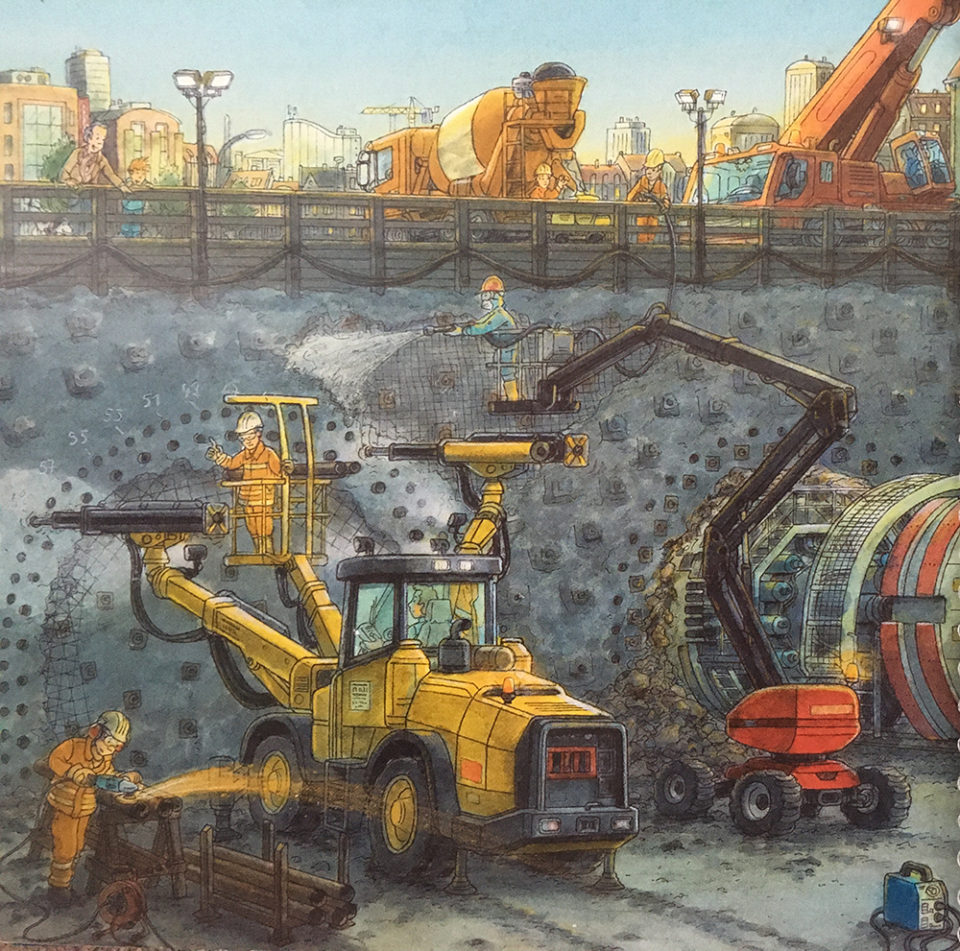 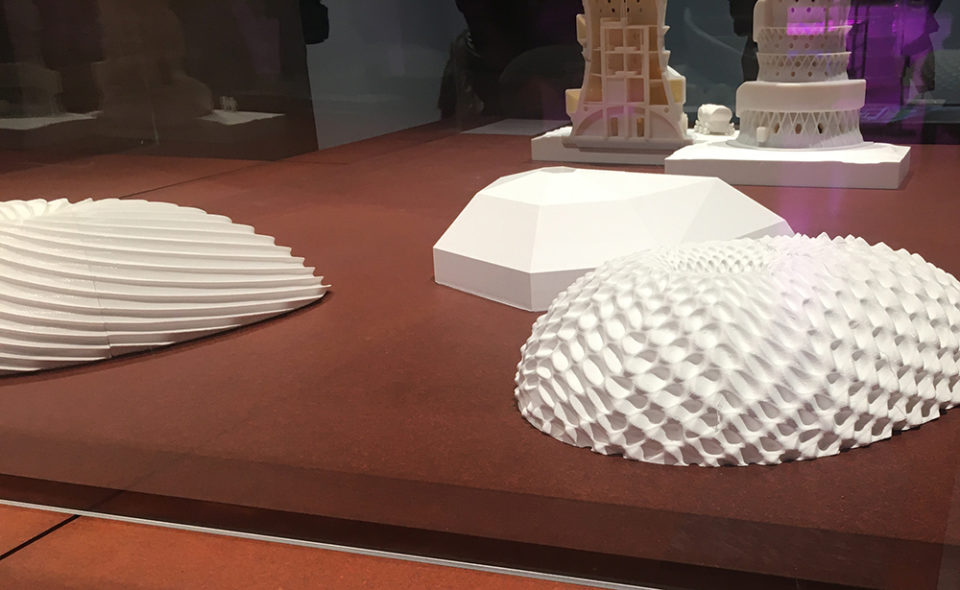 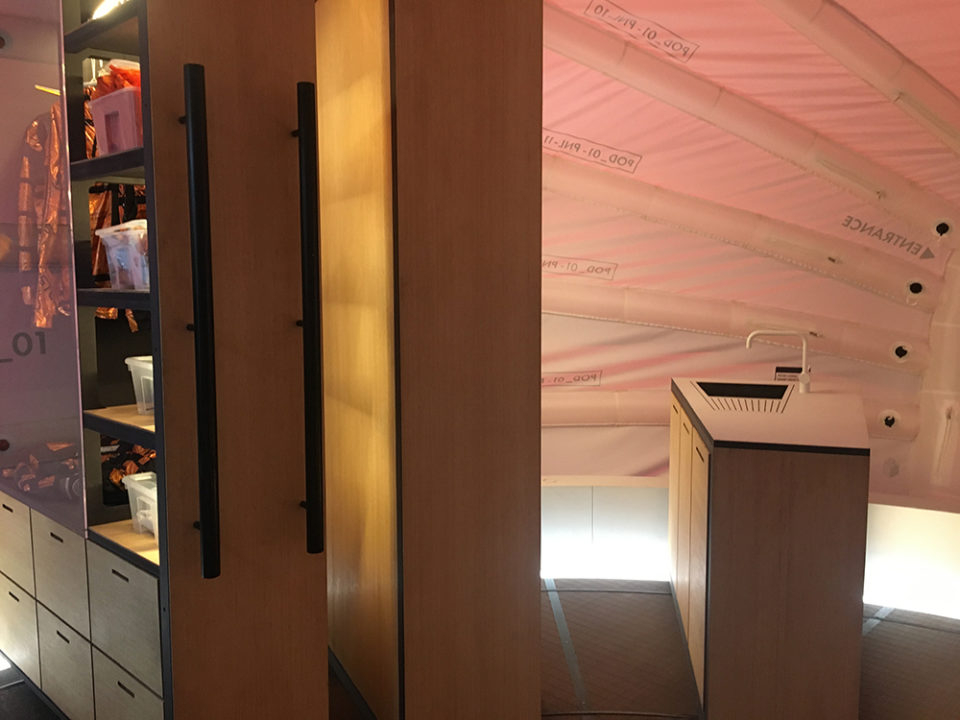 The interior of the living quarters makes clever use of a modular system, just stow away the kitchen when not in use (image above). I have always been fascinated by modular interior systems. You will find many examples from Japan and Hong Kong, where living space is at a premium. The only downside to its wider adoption is human behaviour. Before being able to stow away a unit, such as a kitchen, you need to clean and tidy up the utensils and left-over food, etc. So honestly, who is doing that right after use? Often something else comes in between or you need to leave in a hurry. How would you get to your clothes that are stowed away in the unit next to the kitchen? Unless of course, the food you cook is all in pouches or one-way containers, as currently is the case in space. But what do you do with all the trash you produce that way? Designs for extreme environments or use will help make advances in designs for regular human use, such as Teflon did, which was invented for use in space and is now used in kitchens worldwide. I could see this potential of transfer in the indoor gardens and algae production units for space living shown in the exhibition. 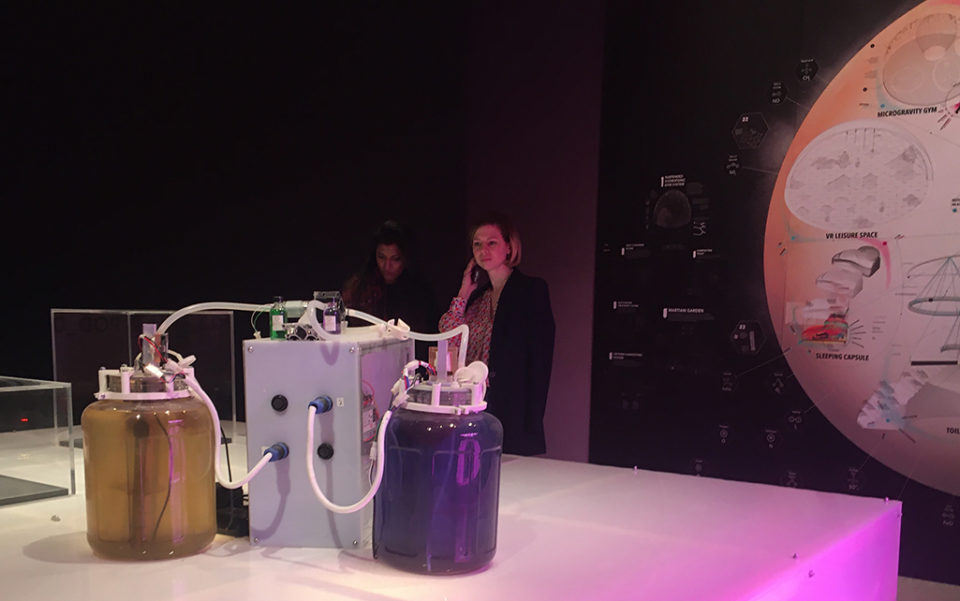 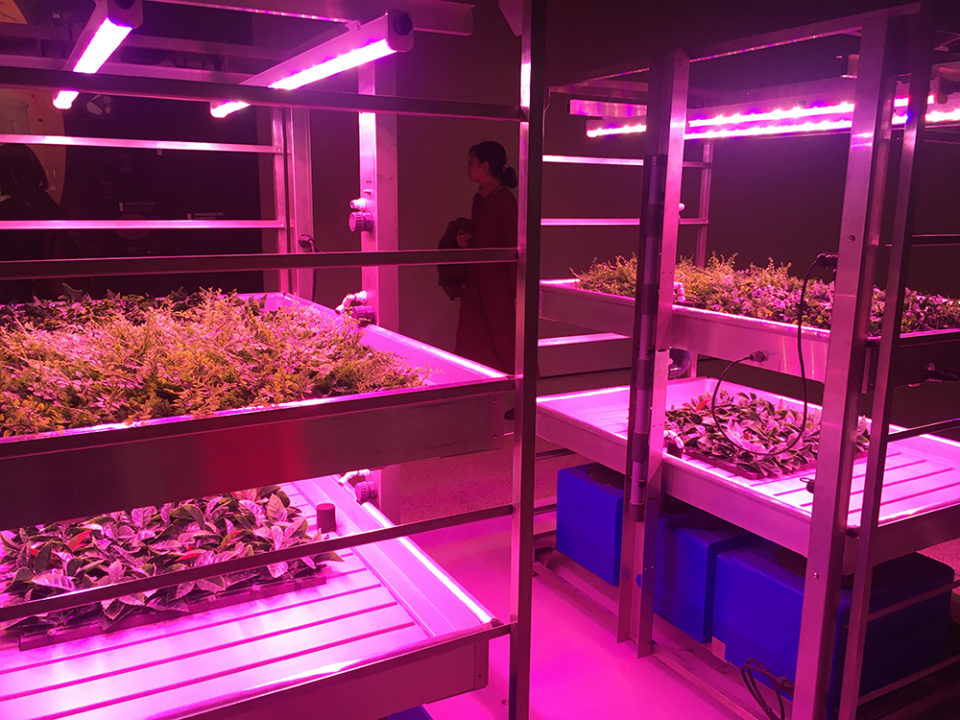 Finally, 3D printing is suggested to be one of the core space manufacturing methods. The exhibition featured 3D printed chairs and tables, but the process could include the printing of satellites (modular of course) and Bio and Nanotech. The following short article introduces 4 projects that test 3Dprinting in space. A super interesting read: https://all3dp.com/2/3d-printing-in-space-4-most-promising-projects/

The exhibition ended today. I am glad I went.