I’m an astrophysicist and my research is mainly concerned with what may be called the “time domain universe”, or simply: stars whose brightness varies with time.

Stars can have a variable brightness for one of several reasons: they might be intrinsically variable due to pulsations of the star’s atmosphere; they might be in orbit with another object that periodically passes in front of it; or they might suffer some form of catastrophic change that causes flaring or outburst behaviour, for instance.

One way to carry out research in time domain astrophysics is simply to monitor the brightness of all the stars in the sky and see what you find. This is, in effect, what is done by the WASP (Wide Angle Search for Planets) project, of which I and others at the Open University are part.

My talk at the Science Matters event gave a brief summary of the topic of exoplanets and how to find them with WASP. You can watch the talk below and read the abstract below that. The video is just over ten minutes long. However, as I’ll discuss in this post, WASP is also invaluable for carrying out research in other areas of time domain astrophysics, apart from exoplanets. 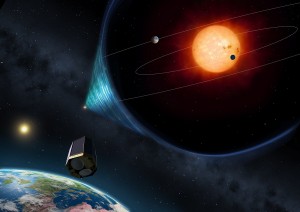 Abstract
Exoplanets and how to find them
Dr Andrew Norton, Professor of Astrophysics Education, The Open University

20 years ago, astronomers did not know for certain that any star other than our sun had planets orbiting it. Now we know of around a thousand so-called exoplanets.

In this talk Andrew described one of the techniques for detecting planets around other stars and show what can be learnt about them from astronomical observations.

Exoplanets are simply planets that orbit stars other than the Sun, and WASP works by looking for those exoplanets that transit in front of their parent star.

Planets produce virtually no light of their own, so if they happen to pass in front of their star (from our viewpoint), then they will block out a tiny fraction of the star’s light, resulting in a slight dimming of the light that we see.

Unfortunately, even planets as big as Jupiter will block out less than 1% of the light from a star like the Sun, and for a planet the size of the Earth, the fraction of starlight blocked out is a hundred times smaller still. And if this is not difficult enough, only those planetary orbits that happen to line up exactly with our line of sight will cause a transit in the first place. Orbits can be orientated at any angle, but only those within about 1 degree or so of our line of sight will cause the dip in the starlight that we can observe. 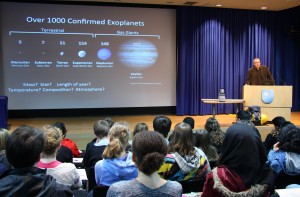 Professor Andrew Norton, 'Exoplanets and how to find them'

Despite all these difficulties, projects like WASP have been remarkably successful at finding exoplanets. One of the keys to WASP’s success is that it can image a huge area of the sky in a single snapshot.

WASP in fact comprises two installations – one in the northern hemisphere on La Palma in the Canary Islands, and one in the southern hemisphere at the South African Astronomical Observatory. Each installation consists of eight cameras on a robotic telescope mount, and each camera can take images of the sky covering an area over two hundred times that of the full Moon. This means that WASP can take images of around a million stars in a single exposure.

For those who like the technical details, WASP uses Canon 200mm focal length, f/1.8 focal ratio ‘papperazzi-style’ lenses with an aperture of 11cm each. They are backed by high quality e2v CCD detectors with 2048×2048 pixels, resulting in an image angular scale of 13.7 arcseconds per pixel.

The way to find transiting exoplanets is simply to take many, many images of the same stars over and over again. Over the course of an observing season lasting around eight months, WASP may take thousands of images of each star field, accumulating several terabytes of data in the form of images of the sky. The brightness of each star on each image is then carefully measured, resulting in a ‘so-called’ lightcurve of each star – its brightness variation with time. Sophisticated computer programs then examine these millions of lightcurves looking for those that show possible repeating dips that signify the presence of a planet orbiting the star.

Not all the dips found are due to planets though. Some of the dips may just be due to random noise in the detectors or effects of the weather, and some may be due to other astronomical phenomena such as the presence of another nearby star. Therefore there is a process of carefully weeding out these so-called ‘false positives’ and then following up the remaining candidates with other, larger telescopes to verify that they are indeed transiting exoplanets.

WASP can claim to be the world’s leading ground-based exoplanet detection programme, having discovered around 100 of the 400 or so confirmed transiting exoplanets found to date.

Hierarchical multiple stars
Since WASP delivers lightcurves of millions of stars, it is also a fantastic tool to study all types of stellar variability. The ones that I’m currently interested in are those known as eclipsing binary stars and star systems consisting of hierarchical multiples (triple and quadruple systems, for instance).

Amongst the millions of stellar lightcurves accumulated by WASP are several tens of thousands of eclipsing binary stars. These appear as a single point of light in the telescope, but in fact consist of pairs of stars orbiting around their common centre of mass and aligned such that each periodically passes in front of the other, once per orbit, giving rise to ‘so-called’ eclipses.

Along with my current postgraduate student, Marcus Lohr, I’ve been looking at the shortest period eclipsing binaries containing main sequence stars (stars, like our Sun, that are undergoing hydrogen fusion in their cores). 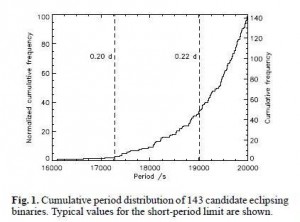 We found around 140 systems close to what had previously been suggested as the short period cut-off for these objects – around 5 hours. A histogram showing the distribution of these systems is shown here (Figure 1).

This shows that there are fewer and fewer systems found as we approach a limiting orbital period. This may reflect the fact that all such systems evolve to shorter orbital periods with time and the Universe is simply not old enough for systems to have reached even shorter periods yet. Alternatively it may be that once they reach a period of around 5 hours these binary stars rapidly merge to form a single object. We can search for such potential merging systems by looking for eclipsing binaries in which the eclipse times get progressively closer together as years go by.

As part of this search, we also found an interesting three-star system. It contains a pair of stars that are much smaller and less massive than the Sun, that appear as an eclipsing binary with a period of just over 5 hours. However, the spectrum of the system is dominated by that of a somewhat larger, brighter and hotter star.

We speculate that the brighter star is in orbit around the fainter binary pair, forming a hierarchical triple system. Further evidence in support of this idea comes from the fact that when we look at the times of eclipses of the binary pair, they appear progressively slightly closer together and then slightly further apart in time, varying cyclically with a period of just over 4 years. The amount of change is very small – the eclipse timing only varies by up to a few tenths of a second per year – but is nonetheless detectable. This might reflect the fact that the third star orbits around the binary with a period of about 4 years, tugging the smaller pair to and fro and so giving rise to the eclipse timing variation.

We also found a remarkable quadruple star system, consisting of two eclipsing binary pairs. This system appears as a single point of light in WASP’s telescopes, but its lightcurve shows unmistakeably the signature of two separate binary stars. One pair varies with a period of about 5.5 hours whilst the other has a period of about 1.3 days. The two binaries are themselves separated by a distance of about the same size as the solar system out to the orbit of Saturn (and can just be resolved when imaged with a larger telescope than WASP), but both pairs are aligned precisely edge-on to our line of sight. This is only the sixth such doubly eclipsing quadruple star known.

Our current investigations are focussing on a subset of a about dozen star systems each of which contain a normal star in a binary orbit with an evolved star, in very close, short-period orbits. The evolved star is probably the stripped core remaining after a red giant has lost its outer gaseous envelope. As such stars are very small (less than a quarter the diameter of the Sun) the binaries containing them can be very compact with orbital periods as short as 2 hours. 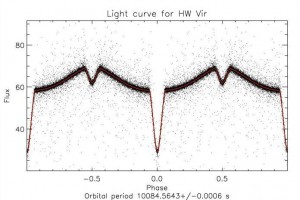 Additionally, if the putative third body is in an orbit that is inclined to the plane of the inner binary, it might conceivably cause a precession of the binary orbital plane. This would result in the observed eclipse depths varying in a cyclical manner, on the precession period. Such eclipse depth variations may also be searched for in these compact eclipsing binaries as further evidence of circumbinary planets.

The WASP data archive is a rich treasure trove to mine in years to come and will undoubtedly reveal many interesting variable astrophysical objects as more investigations are carried out.

One thought on “Exoplanets and how to find them”