Tuesday, the 21st of October 2014, will be a day well worth remembering, not only for the advice that studying maths and physics is what it takes to have the chance to be selected as an astronaut. And if that doesn’t work, it is stills math that opens doors to the best paid jobs.

Scientist meets astronaut
Dr. Stanley G. Love, a planetary scientist and NASA astronaut, touched down at the Open University, this week. He delivered an inspiring lecture to over 50 school pupils and OU undergraduate students and members of staff about his participation in preparing missions to the Moon, Mars or asteroids. And he answered a wide range of questions about being and astronaut, space missions in general, and how to explore our solar system in particular. You can watch a recording of the lecture at: Dr Stan Love Lecture.

Dr. Stanley G. Love explains how hard it is to get to Mars – it’s far away, but that’s not the only problem. Image credit: Luke Beaman, OU.

From ground control to the International Space Station
Dr. Love began his career in astronomy and planetary science, a topic that he follows closely to this day. This includes, but is not limited to his most recent publication on particle aggregation. Of course, he is also an astronaut and his space flight in 2008 had the mission name STS-122 to the International Space Station (ISS). His mission was a first: it was ISS Assembly Flight 1E. The ‘E’ stands for Europe and gives an indication of the mission purpose, which was to install the Columbus module, a European built science laboratory.

In his talk, Dr. Love focused on the future of space exploration, especially on preparing human missions to rocky bodies such as the Moon, Mars and asteroids. 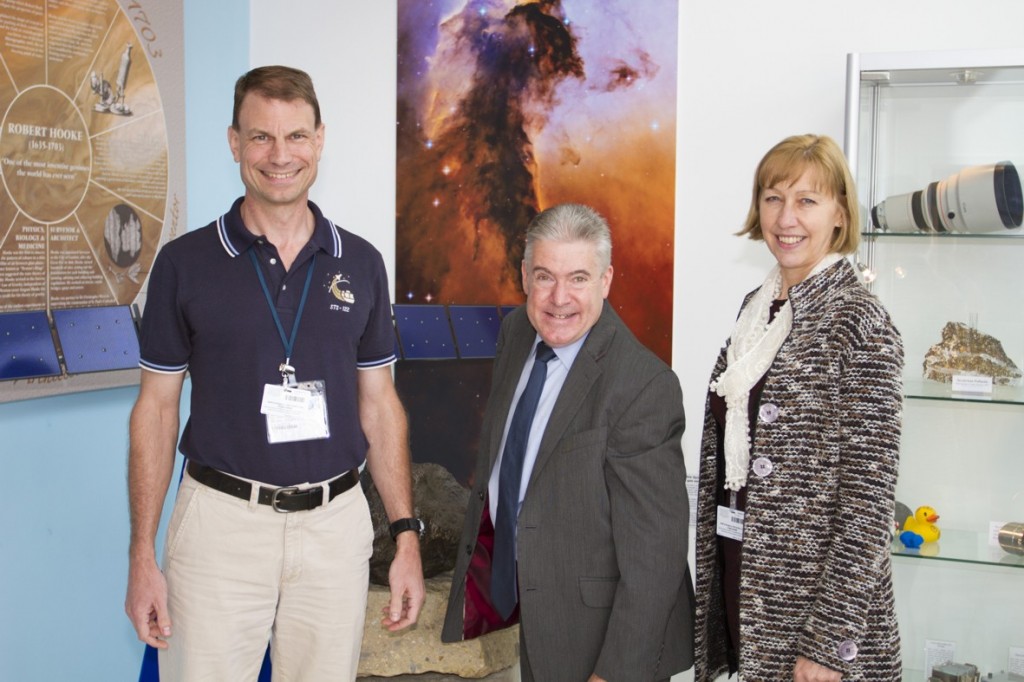 The importance of analogue missions
Preparation for those missions is done in extreme environments here on Earth, from the hot deserts of Arizona, USA to the cold ice sheets of Antarctica, and from the warm water off the coast of Florida, USA to the cold water of Pavilion Lake (British Columbia, Canada).

During each of those ‘analogue’ missions specific elements of space exploration are in focus. In the Arizona desert the “Desert Research and Technology Studies” were designed to simulate lunar surface missions and to test vehicles and habitats for a long duration stay on the Moon.

In contrast, ANSMET expeditions to Antarctica focus on retrieving meteorites from the blue ice fields, making them available for studies that help understand the history and composition of our solar system. Of course, this a very challenging place to live and work. In Antarctica, as Dr. Love pointed out:

“…the environment is as close to space as you will ever get without leaving the surface of the Earth”.

While surface-based operations are in focus in hot and cold deserts, working under water is the best place to simulate weightless conditions in space. The NEEMO habitat off the coast of Florida is an ideal place to have a crew live and work from an underwater station, and try out technology to install equipment or practice and test procedures.

Going to Pavilion Lake in Canada adds the element of ice cold water temperatures to the mission, but it also offers a unique possibility to study the lake environment by combining the analogue mission with scientific investigations for scientists in the control room and beyond.

Hearing about the efforts to prepare the next steps of solar system exploration from Dr. Love, who has participated in all of them in a variety of roles, was very inspiring for all who attended.

Responding to questions
After the lecture Dr. Love met the students for a less formal exchange of questions, smiles and, of course, pictures.

Later, participants watching the lecture remotely had the chance to engage in a half-hour-long question and answer session, again featuring Dr. Love.

One of the most popular topics on twitter revolved around what it takes to become and astronaut, and not surprisingly the starting point was…maths! Others tweeted about future space exploration and asteroids that might come a little too close to Earth. And, last but not least, about his personal impressions and memories. Dr. Love pointed out how awe-inspiring it is to look at our home planet, because:

“…the Earth is this incredible, colourful, vibrant, dynamic place. [This is what] really gives you a sense of how special a place we inhabit here.”

Acknowledgements
The astronaut appearance at the OU was made possible by the Faculty of Science and SEPnet. Dr. Love’s second part of the visit was to Leicester, where he visited the Space Research Centre at University of Leicester and the National Space Centre.

We organised the attendance of the local school students as part of the OU’s RCUK-funded SUPI partnership with the Denbigh Teaching School Alliance. Richard Holliman (OU), and Mark Russell and Helen Brown from Denbigh School helped to organise this aspect of the lecture. For further information about the project, select: Engaging Opportunities. To find about more about RCUK’s School-University Partnership Initiative (SUPI), select: http://www.rcuk.ac.uk/pe/PartnershipsInitiative.