This week the snakes-and-ladders-of social-media went on tour (if Milton Keynes to London can be counted as touring). I ran a social media workshop at London South Bank University as part of their Global Entrepreneurship Week. The session was aimed at researchers but included a small number of students and entrepreneurs, which enriched the discussion.

An earlier post described how Helen Donelan, Clem Herman, and I developed a workshop for the 3rd eSTEeM conference that used a game of snakes and ladders to help researchers discuss how they use, or don’t use, or occasionally dabble in, social media. The tool was then adapted by Nazlin Bhimani (@NazlinBhimani) and her colleagues at the IoE Library to discuss ways they could use Twitter to promote their services and collections to their users. 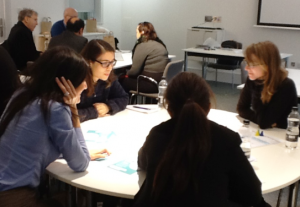 How many does that move me up?

The groups varied in how far up the board the players travelled – one person reached the mid-80s, while another group got so involved in discussing just a few questions that they all languished along the bottom rows. One person managed to shoot up a ladder, which pleased him greatly. But that’s all perfectly OK – it’s not a game that has to be “won”. 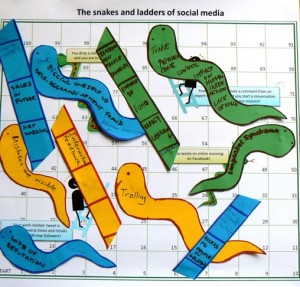 Then I asked the participants to think about the barriers and about the motivations they perceived about using social media and to share them as ‘snakes’ and ‘ladders’. (You’ll notice my drawing hasn’t improved since that first workshop!)

Some interesting barriers emerged: the problem of lack of time and skills, the fear of having nothing interesting to say, the fear of putting mistakes or raw information on show. Likewise some interesting motivators: access to new audiences, interaction with different people, the liberation of being able to discuss work-in-progress in a relaxed way.

The challenge for us, as this tool goes out into the wild, is how to develop a meaningful end-point or outcome for the game. When we used it at eSTEeM, we were able to invite the Open University’s Academic Reputation Manager along to hear what the participants were discussing but how can we build in an output that works in different institutions and contexts?

Thank you to Martha Crawford and Mark Smith @LSBU_Enterprise for inviting me to be part of their GEW activities.