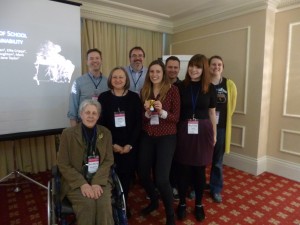 A few weeks before Christmas we facilitated a workshop to discuss the benefits and sustainability of collaborative partnerships at the annual NCCPE Engage Conference in Bristol.

The workshop was developed and delivered by staff from the OU, working alongside colleagues from the School-University Partnerships Initiative (SUPI) based at the University of Bristol, University of Southampton and Lancaster University.

This post explains the planning, preparation and performance of the workshop, and includes a few reflective comments on what worked and what could be done differently next time. 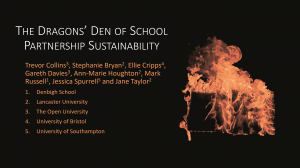 Coming up with creative ways of engaging with engagement experts at their national conference is a daunting challenge. Drawing inspiration from popular media, we based the workshop on the BBC’s popular Dragon’s Den format.

The RCUK funding stream for the 12 SUPIs ended in December 2016. As the SUPI projects have come to a close we’ve all been focusing on sustaining the beneficial partnerships that have formed. Therefore, sustainability seemed like a timely topic to explore in the workshop at the Engage Conference. One of the issues that all 12 SUPIs have been considering is what sustains partnerships. Mutual benefit seemed like a good place to start, so we suggested that the presentation pitches focus on the sustainability of their partnerships by explaining the benefits to the participating individuals, institutions and wider society. 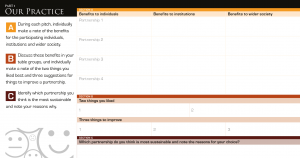 To help structure and document the activity, we developed the idea of a “tear and share pamphlet”. Working with Peter Devine (an OU graphic designer), we produced an A3 size worksheet that folded up to form a small pamphlet for the delegates. One half was to capture their feedback on the SUPI projects and the workshop format; and the other half was to capture reflections on their table discussions concerning their own practices. The pamphlet was perforated, so that the delegates could tear it in two; returning the feedback half to the workshop facilitators and taking the other half away. 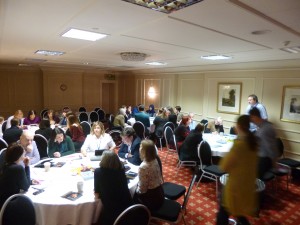 The workshop was attended by 26 delegates and eight facilitators. I introduced the workshop and each presenter.

Mark Russell from Denbigh School and Gareth Davies from The Open University gave the first pitch on the ‘Engaging Opportunities’ partnership in Milton Keynes. Then Jane Taylor from Lancaster presented the ‘Research in a Box’ programme which they ran in Lancaster. Ellie Cripps from the University of Bristol described the work their partnership had been doing with secondary schools in Bristol. Lastly, Jess Spurrell from the University of Southampton gave an overview of the STEM-based activities that the ‘Talk to US’ partnership had developed in Southampton.

This was followed by table discussions of the pitches, and the delegates were asked individually to note two things they liked and three suggestions for improvements, along with their choice and explanation of which initiative the felt had the best chance of being sustained.

The benefits of partnership working

The second half of the workshop focused on the delegates’ partnership experiences. They were asked to select an example of their own work and make a note of what they felt were the benefits to the participating individuals, institutions and wider society, before briefly explaining these to their table groups. As the with the SUPI pitches the delegates were invited to individually note two things they liked from the table group partnerships and three suggestions of things that could improve them; before also noting which one they felt had the best chance of being sustained.

And the winner is…?

To conclude the workshop we summarised the session and discussed a few questions from the delegates before awarding a trophy to the delegates’ choice for the ‘Winner of the Dragon’s Den of School-University Partnership Sustainability 2016’ – Ellie Cripps from the University of Bristol.

Reflections from the workshop 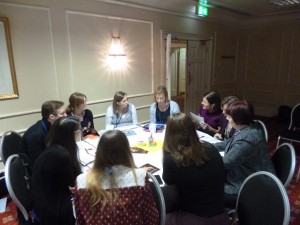 On the day, I was surprised by the delegates’ enthusiasm for the task and active participation. To plan and deliver a workshop by four independent SUPI project teams, we had made the activity, instructions and timings very structured and explicit, so I was concerned that those delegates preferring more free range would react or disengage with the task.

Fortunately, this was not the case, although the time was limited, the discussions were focused and purposeful. Those that liked the structure worked with it and those that didn’t appropriated it accordingly. Not everyone completed every section of the pamphlet or followed every instruction, but the 20 returned feedback sections showed that the pamphlets had been useful for notes, and the feedback received about the partnerships was clear and constructive.

I was also impressed by the professionalism of the presenters. Everyone worked within the brief and presented to time, which made my role of introducing and timing the workshop very straight forward. The SUPI project representatives were also able to join the groups to facilitate and contribute to their discussions. On a five point scale (i.e. 1 poor, 2 not very good, 3 ok, 4 very good and 5 excellent) the workshop was rated with an average of 4.06 (i.e. four 3’s, eight 4’s and five 5’s). 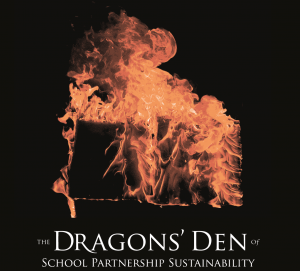 On reflection, I do think the workshop went well and that the delegates benefited from attending, I certainly learnt a lot from helping organise it. Although the delegates were able to make the call on which partnership had the best chance of sustainability (congratulations to Bristol), I think there is a lot more to it than the theme of mutual benefit that we looked at in the workshop. I also feel that I missed an opportunity to draw the concluding discussion back to the topic of sustainability, so that’s what I’d do differently next time.

I believe the benefits to institutions is a key part of sustaining partnerships, because for a lot of us that’s the immediate source of support (or the lack of it). I’d argue that we should focus on the values of the institutions to understand which benefits they are likely to be committed to when things get tough. One thing we successfully avoided in the workshop was complaints about funding for engagement, but sustaining activities inevitably costs time, effort and resources. The commitment needed to sustain these activities is closely tied to what the participating individuals, institutions and wider society really value.

The SUPI teams have been formed through the commitment of RCUK to engaged research, which some of the participating universities are now continuing. However, as the HE sector continues to change in response to bigger changes in our society, the values of our universities are also being challenged as they are forced to adapt in order to survive within an increasingly competitive environment.

This post discusses an activity that was organised through the RCUK-funded School-University Partnership Initiative (SUPI). From 2013-2016, the a Open University worked in partnership with the Denbigh Teaching School Alliance through the ‘Engaging Opportunities‘ Project.