If the prevailing brand culture is a reliable indicator, then society at large is seemingly obsessed with names. Products, including electronics, fashion, food, etc., are bought because of the name slapped on them, often without much more thought. And, it often seems that political discourse and public debate suffers from a similar affliction, where complex issues are distilled to a snappy label or phrase, and so simply dismissed.

But the name of a thing can give little insight into its true nature: its purpose, its capabilities, its value. Knowing a name is a false knowledge, a mere label. This is a truth that the young Richard Feynman learned from his father:

You can know the name of that bird in all the languages of the world, but when you’re finished, you’ll know absolutely nothing whatever about the bird. You’ll only know about humans in different places, and what they call the bird. So let’s look at the bird and see what it’s doing—that’s what counts.  (Richard Feynman, 1981)

For Feynman, this was an important lesson that proved fundamental in his career as a physicist. He realised that knowing the name of a scientific principle is not the same as understanding the principle, and this gave him the drive to seek deeper insight. And, this is a lesson, that benefits everyone, not just scientists.

Take as a simple example the shape below. If asked to name the shape, it is possible that you might say that it is four squares with overlapping corners. But, such an obvious label obscures much of the richness of the shape. 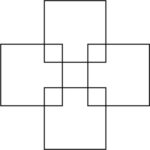 If, instead, you avoid labelling the shape in terms of easily named parts, and instead take time to look at the shape and see what it is doing, you’ll find all sorts of different forms can emerge, such as different letters of the alphabet, common symbols, figurative shapes, etc., etc. There are countless ways to look at the shape to see what its doing, and this gives rise to different interpretations, then reinterpretations. There is a delight to discovering new forms embedded in the shape, some of which are contradictory and conflict with previously discovered forms. But, each way of looking gives rise to different understanding, new meaning that is absent in the labelling of the shape as four squares with overlapping corners. 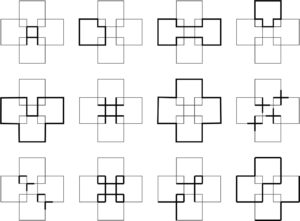 For designers, attempting to solve a design problem, looking at it to see what it’s doing is essential. It avoids fixation on superficial, easily named, aspects of the problem. For example, if a designer tasked with redesigning a washing machine fixates on washing machine, then what scope is there for a creative solution? In our module T317 Innovation: designing for change, we encourage students to move beyond fixating on the obvious description of a problem and instead to focus on looking in different ways. Moving beyond names makes it easier to reimagine the problem they are trying to solve. What is a washing machine? As an object, a service or a system? To individuals, businesses, or society? It is a kitchen appliance, a stylish addition to a modern kitchen. It is clean clothes. It is a saver of time and effort. It is a consumer of energy and water. It is a washer of clothes. It is a destroyer of clothes.

How many more ways are there to see a washing machine? Its uncountable; different ways of looking results in different ways of seeing. To an engineer it is a mechanism for applying friction to clothes submerged in soapy water. To a manufacturer it is a collection of nuts, bolts, drum and motor. To a delivery driver it is a very heavy box. To a user it is a tool to facilitate an annoying chore. To a small child it is a noisy monster in the corner of the kitchen. To a cat it is a fascinating twirling vortex of colour.