A bit of a festive post to end the year on how the smallest atom of design is and Santa are related.

But first: What is the smallest possible particle of design process?

At The Open University Design Group, this question has baffled at least one design education researcher for at least a minute. In part because we are obsessed with trying to find the simplest and best explanation for what designers do. Usually with diagrams – a nice picture helps because it’s both precise and also totally vague at the same time*.

At the other end of the Design Group research corridor, theoretical design educators are trying to find the smallest particle of design by testing a theory by Donald Schön in his book Educating the Reflective Practitioner (Schön, 1987). This theory starts normally enough, with the idea that design is a very basic human act of making, but suggests that, underlying this, is an even simpler thinking process.  This was part of his work around systems thinking and stable states (Ramage, 2017), the idea that our thinking is a system and that, for new thinking to take place, the system has to destabilise first.

Using a very large, and very fictional, design particle accelerator, Design Group scientists have managed to picture, for the first time ever**, the smallest particle of design:

As you can imagine, it caused quite a stir: SURPRISE is the secret ingredient in all design processes.

(Santa, as you can imagine, was not …. surprised. He knows that interruption of normal cognition to enable a higher cognitive arousal state, pre-associated with high desire, is what underpins the spirit of xmas …)

Here’s the process in a bit more detail:

Note that design is not all about being surprised (if it was, the world would be filled with a lot of very surprised toothbrush designers). Being a designer is about doing both unsurprising and surprising stuff: you need to both come up with new ideas as well as get your design finished.

But what surprises do is interrupt your normal process of thinking and doing. This is very likely to be a relatively fundamental cognitive process, such as the one that begins another cognitive process know as Divergent Thinking (Heilman et al, 2003), key to new and creative thinking. Basically, our brains have a different way of responding to things we know compared to things that we don’t know (more on this in a future post, maybe).

This is absolutely great for generating ideas in the early stages of a project and very useful in later stages as an approach to problem resolution. And, you should see that general progression in your own design project process: as you make progress, you hope to see fewer surprises and do more unsurprising things.

Surprises are neither good or bad – they can be anywhere on the spectrum from “brilliant new ideas” to “terrible problems that have ruined my beautiful design idea forever”. They are a necessary part of working on anything that can’t be fully predicted or defined.What’s also important here is that both negative and positive surprises lead to additional things you know (or can do) as a designer. Nothing is wasted! OK – there are things that are better or worse to know and that’s where developing your expertise, or artistry, as a designer becomes so important.

Surprise might also explain why some designers have certain preferences around which parts of the design process they enjoy the most. Some designers prefer the removal of surprise and revel in the beauty and order of a well-predicted design outcome. Yet other designers might even actively leave a bit of surprise in (if you’ve studied U101, you came across this with Incompleteness in Design).

In other words, to act as a designer is about how you respond to surprise: what you do with it; how you manipulate it; when you welcome it (or not); why you hope for it. All the other tools, processes, activities, and things you do are all things you create for yourself as a designer to help you deal with SURPRISE! So the next step up is something like this: 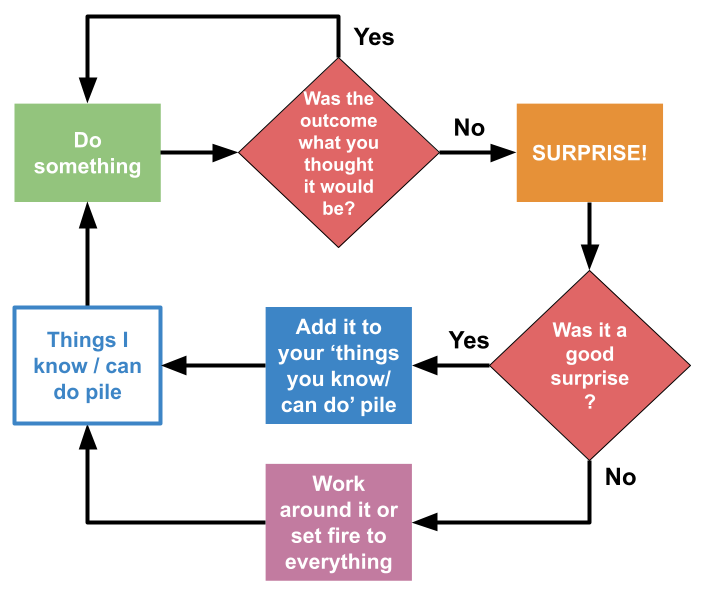 (it’s actually this step of the process that’s a bit more complicated and harder in design education -but more on that in a future post).

So, if you get a surprise from Santa this year, say an extra thank you for the opportunity to design something.

A happy mid-winter and new year to everyone from the OU Design Group!

* Just use the search using the term “design process” and you’ll get a whole bunch of very precise and slightly useless diagrams (most of these are actually project process diagrams but that’s another issue…).