What did YOU do in the War (against Covid19)? Engaging a response to the covid pandemic through visual communication.

It seems we might just, finally, be starting to win our battle against the scourge of covid. In fighting an invisible enemy that has had such a devastatingly tangible impact, it is not surprising that the rhetoric has sometimes carried metaphors of war. COBRA meetings in Whitehall and the Queen urging the country to remain “united and resolute”, along with her emotional ending to her speech to the nation on April 5, 2020, that ‘we will meet again’, have contributed to us feeling we must pull together patriotically. These past two years truly have been horrific, not in the same way as a war, but there has been a shocking number of casualties; millions of lives lost and others left with significant physical and mental scars. I have been surprised, therefore, with something so powerful and all consuming, that the official visual communication has been so generic and unmemorable. Unlike in a war where the posters urge a call to arms (that very phrase, a gift to our vaccination programme), our graphics have, in the main, either looked very corporate, or have been insipid compilations of what looks like free clip art.

Designing for health is not easy. Posters need to be accessible to a wide range of ages, cultures and languages. Ideally they should communicate their message without any need for text. Government directives need some common styling to give them authority, especially for specific instructions like hand-washing, but one size doesn’t fit all when presenting a challenge to how we live. Seeing the same image month after month can also mean the message gradually blends into the wallpaper. The demographic who watch the news via televisions received a daily dose of often scary medical footage and information to guide them in their behaviour, but what of those who didn’t access these channels? The government did infiltrate social media by posting some of its guidelines. Anecdotally, many younger users simply scrolled past these, although the ‘Look them in the Eyes’ campaign did more readily engage them, making them stop and listen in the same way that earlier photos of medics showing their battle scars left by the constant use of PPE had made an impact. The reason, no doubt, is that these images made eye contact – a well known device for those designing magazine covers to grab browsers’ attention on the news stand. 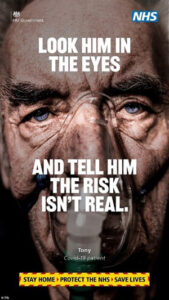 The directive was more personal but did it really motivate a change in behaviour? There’s a place for guilt inducing imagery, but too much doom and gloom leads to fatigue or a sense that an individual’s actions can’t make a difference. The British campaign also had a scoldy, accusatory undertone which didn’t wash well with some audiences.

The pandemic was an opportunity for designers to create some of the most powerful graphics they might ever have the chance to produce. What has been interesting is that much of the strongest material has come from open calls, encouraging the public to submit their own ideas for communicating vital information.

In late March 2020, the Dutch design company, Studio Lennarts & De Bruijn, in collaboration with Overdeschreef, launched a poster platform, Stay-Sane-Stay-Safe, to gather creative responses to the pandemic.  There are now over 2000 posters on the site submitted by designers from 89 countries, free to download and share. Their aim was to create positive messages rather than spread fear and doom and some of these were displayed in Dutch hospitals and on massive billboards, as well as around many public spaces. Sebastian Pren’s Disney cartoon-like ‘Keep ‘em Clean’ design was featured with 11 others around the city of Breda. The light-hearted, witty and inclusive designs are more likely to capture the attention and encourage the compliance of a demographic who might deliberately eschew an authoritarian government directive.

Other coordinated participatory campaigns include that of The United Nations which put out a call for artists to produce “concise and impactful visuals to help share life-saving information on COVID-19.” Between March and April 2020 tens of thousands responded from all over the world after which point, the submissions were checked for accuracy before being made available to download and share via their online gallery. Around the same time, a similar model of sharing engaging posters for free was promoted by Seattle arts group, Amplifier. They asked artists to focus on mental health and well-being, and from the thousands of submissions 60 entrants were awarded generous cash prizes.

The lead image on their platform by Thomas Wimberly shows a female medical worker wearing a mask with a map of the world on it, with a schematic globe behind her head like a halo. Her eyes meet ours. Simple and direct. Some of the submissions have been translated into powerful public art installations in collaboration with art activist group The Illuminator thus having a wider reach.

The style of Wimberly’s poster is not dissimilar to a series of images produced by LA Studio Number One, (partnered with the local government) on the theme of ‘Protect and Respect’. The second set of these focused on encouraging residents to get vaccinated, with images again recalling war posters, and most especially J. Howard Miller’s ‘Rosie the Riveter’. 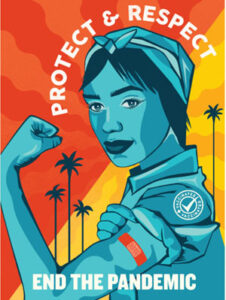 Art is powerful. People are drawn to images they think cool. An eye-catching colourful poster can make mask wearing seem appealing; a must-have to be part of the in-crowd. If it’s cool enough, funny enough, or just pulls a punch, a poster might get shared on Instagram, or more anarchically, fly posted. Award winning graphic designers, James Hodson and Jason Keet, were surprised to see their work being pinned to trees in parks and people’s windows. At the start of the pandemic they had set up a website, ‘war on covid 19’, showcasing their designs based on old war posters.

They launched them on social media, encouraging people to download them and share, and their playful artwork began to appear in London, Manchester, Brighton, and even in China. Such fun, easy to digest imagery gets the message home. 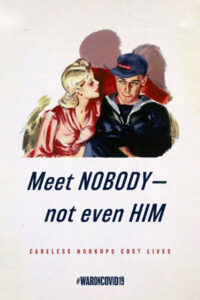 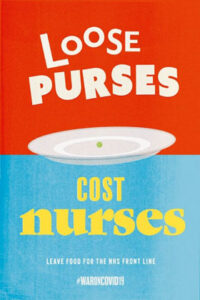 In America, other artists were doing similar things. Marc Rosenthal in New York, was drawing on the style of WW2 posters to create illustrations to help stimulate a united wartime spirit whilst Clara Aranovich was appropriating war posters, motivated by the moment when the number of Americans who had died of covid 19 surpassed the number who had died in the first world war. Like Rosenthal, she hoped her work would help inspire a sense of camaraderie in the same way that the original posters had helped bring people together to support the war effort. Like Hodson and Keet’s imagery, her posters gained wide exposure via social media.

The generosity of designers to allow their work to be freely shared, and the success of the open calls, shows how we can all pull together and use our creativity determinedly for the common good, hitting audiences the government can’t reach and without a destabilising message of fear and a multi-million pound price tag. Art reassures and inspires in times of crisis, and can help us feel that we are actively doing something rather than feeling impotent, even if this is just sharing a powerful image on Instagram.