Engaging opportunties: Water rocket competition
In July 2013 five teams of six Year 9 students and one team of six Year 10 students from Slated Row Special School competed in a competition to launch water rockets. The teams, representing five schools from Milton Keynes, were judged on the distance the rockets flew, whether they could successful land an egg, and the design of their rockets.

The teams were supported on the day of the competition by Open University researchers, staff from Denbigh School and teachers from their home schools. The organising team included: Richard Holliman, Mike Bullivant, Vic Pearson, Kris Stutchbury, Peter Taylor, Mike Batham and me from the OU, and Andy Squires and Val Hawthorne from Denbigh School.

A panel of judges, including the Mayor of Milton Keynes Brian White and Professor Peter Taylor from the OU, assessed the entries. The team from Milton Keynes Academy were the winners, launching their rocket over 90m. They received a trophy, which was designed at Denbigh School. All the competitors received a replica of this trophy in the form of a key ring.

As Project Manager for the project I was responsible for the organisation from the Open University side of things, working closely with Val Hawthorne from Denbigh School. 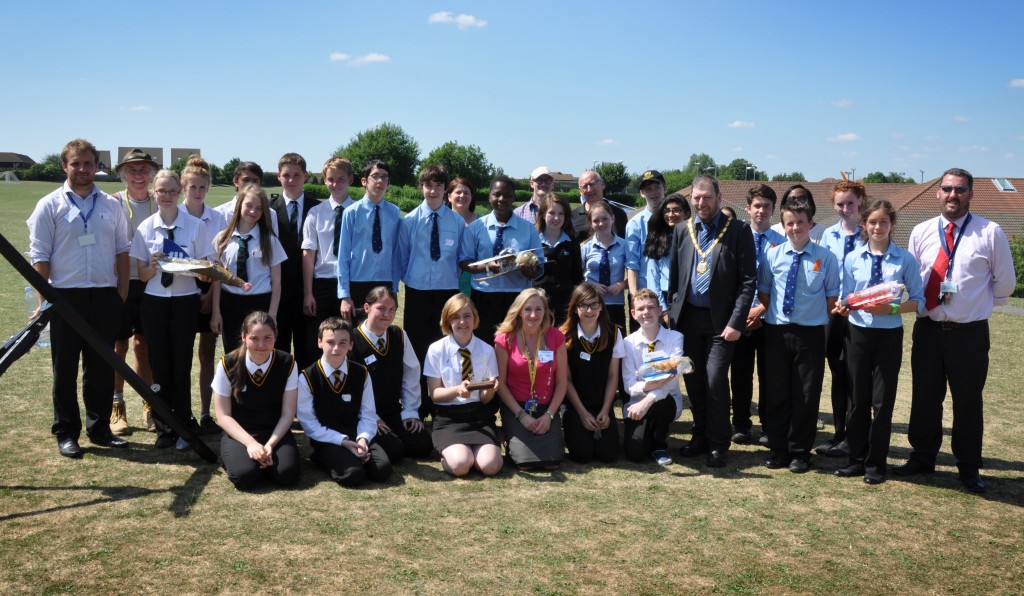 School-university engagement
The competition was part of a wider School-University Partnership Initiative to provide school students with opportunities to engage directly with research and researchers from different academic disciplines, offering opportunities to participate in mutual learning and develop relevant and useful skills and competencies in how to access, assess, analyse and respond to contemporary research. 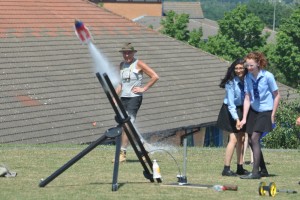 A rocket launches under the watchful eye of Mike Bullivant

Within our project, called Engaging opportunities, there are four types of activities: Open Lectures; Open Dialogues, Open Inquiry; and Open Creativity. The water rocket activity was organised as an inquiry-based activity.

Rough Science promoted a methodology based on creativity and hands-on problem solving, using household goods and materials. The aim in this case was to demonstrate scientific principles and skills, such as developing and testing a hypothesis, and through this to:

Led by Richard Holliman and Gareth Davies, we’re working on the evaluation of the activity now to assess how succesful we were in addressing these aims.

Open Creativity
In a related activity a group of Year 12 students from Denbigh School filmed the competition. This filming built on a previous activity where the students received media training from Open University staff in producing videos, including one of a research cafe. However, this time they were working without supervision from OU staff and teachers. If you would like to view the results of their filming, you can watch the video below. 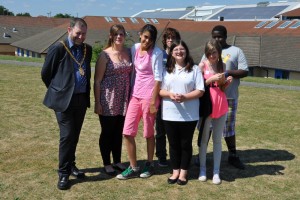 The team from Slated Row Special School, with the Mayor of Milton Keynes Brian White

We start from the premise that young people are key publics for public engagement with research activity. They are the pool of talent from which the next generation of expertise will develop. They are also prospective citizens with a stake in how research agendas are framed and prioritised. And they will have some responsibility for managing the benefits and challenges that arise from the social and economic impact of these studies.

To find out more about the project, select: http://www.open.ac.uk/engaging-opportunities

One thought on “Fly us to the moon…”