I recently took part in a Research Café at Denbigh School in Milton Keynes as part of the Engaging opportunities project. I’d been invited to take part as members of the project team were aware of my public engagement with research work.

The structure of the café was similar to the Café Scientifique events held across the country but instead of engaging members of the general public in scientific debate over a latté in the local coffee shop or bar, this event was held at the school with an audience of Year 12 students, sipping coffee and eating biscuits.

The topic of the café, ‘Smart Drugs: a risk or a right’, relates directly to some of my research in the Department of Life, Health & Chemical Sciences at the Open University into the effects of methylphenidate, better known as Ritalin or Concerta. This drug is prescribed for people with conditions such as Attention Deficit Hyperactivity Disorder, but it is increasing being taken by healthy individuals, particularly university students, to boost their cognition, or put another way, to make them smarter. 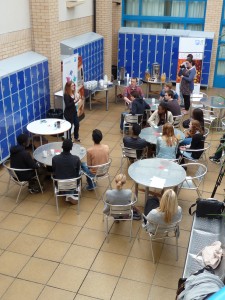 The research cafe on 'smart drugs: a right or a responsibility'

Despite this increasing use we don’t really know that much about the effects of the drugs in healthy people and exactly why and when people are using them. Furthermore, there is significant debate at the level of policy makers about whether these drugs should be legalized or not, so it is clearly an important issue for public discussion and debate, especially with potential consumers.

Preparing for the café was very straightforward.  I worked with Ann Grand, who works at the OU on the PER Catalyst project, but also has considerable experience with research cafés having coordinated the international café scientifique network for a number of years.  Ann has also written about this form of engagement through dialogue.

I planned a brief introduction to the topic of smart drugs and then had four or five statements or questions in my mind that I wanted the students to consider, such as what information they would want, if any, before taking the drugs and whether it was any different to taking steroids in sport.

In order to ensure the discussion got going I gave students cards for a simple red/green voting system. If they agreed with a statement they could show their green card and if they disagreed they could show their red card. It was very refreshing to see that on the tables of four or five students there was rarely agreement and this gave excellent opportunity for discussion with students raising a number of issues or opinions on the topic.  And the discussion continued after the café had finished.

You can see the results of this approach in a short video that Year 12 Denbigh School students made of the research café.

As a neuroscientist, it is really important to see the potential impact of my area of research both in terms of ethical opinion and ideas for legislation of such drugs. This is all the more relevant when that comes from the next generation of scientists, citizens, voters, and potential consumers of these drugs.  In many ways it re-affirms the need for the research I conduct, but it also reminds me that science does not exist in a bubble.  Rather, it exists within a moral and ethical society and policy makers will ultimately have to use the scientific understanding provided to them, allied with this wider context to make some challenging decisions.

2 thoughts on “Engaging opportunities: a research café on ‘smart drugs’”