Partnership working
It was with great enthusiasm that we partnered with the Open University to submit our Engaging Opportunities SUPI project bid, some 21 months ago, and we have accomplished so much in this time.

A first key step was to make two appointments, to organise and implement the strategy. We have a Project Coordinator (Mark Russell) based in Denbigh and a Research Associate (Gareth Davies) based at the Open University, both providing a valuable insight into how to make the project work from a school’s perspective and a university one.

Creating a culture where school-university engagement is valued
An extremely successful start was made with the media project through which ten Year 12 students participated in a week’s training with the Open University media unit. Students developed knowledge of the conventions of documentary filming, camera and editing skills which they put to good use, filming other Engaging Opportunities events, such as the Bottle Rocket challenge, which took place in July 2013. You can watch the films they produced by reading the following post: Denbigh School films. Since then we’ve run the same media training workshop with a further three groups of trainees, including Walton High, MK College and Denbigh School. (To watch the films made by Walton High about Rosetta, select: Walton High films.)

The Bottle Rocket challenge was another highlight. Supported by researchers from the Open University, students from other Milton Keynes secondary schools and a special school competed to design, build and successfully launch their bottle rockets. Marks were awarded for distance travelled and efficiency of design. This worked so well that we ran the competition again in July 2014, adapting the rules following feedback from Year 1.

What is a researcher?
An important aspect of this project has been breaking down preconceived ideas of what scientists do, opening pupils’ minds to the possibility of working in research and also demonstrating the wide range of areas that researchers cover. This has been done through STEM lectures and research cafes that students from Denbigh and across Milton Keynes have enjoyed.

We’ve also run activities to explore how researchers are represented in popular media, such as television, providing students with opportunities to imagine what researchers could look like and to consider whether this could provide a career path for them. 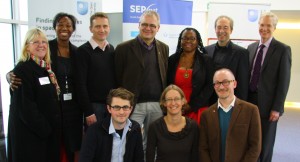 The Christmas lectures, held at the OU, exemplified this broad approach: over 250 students from 3 schools listened to short lectures in which four researchers outlined what their area of research and the practical ways in which they carried it out.

We worked with the OU to ensure that the lectures represented diverse aspects of the sciences. For example, the researchers were selected because they work in different areas of science; they are at different stages in their careers; they have different roles; and we selected two women and two men.

Quality assurance
The impact has been effectively demonstrated through pupil feedback and evaluations before and after different activities. Another major strength of the project has been the broad range of areas the researchers are engaged in, which has suited the needs of the students.

Raising awareness about school-university engagement
Two of the main challenges this year have been developing contacts within schools and scheduling activities. However good progress has been made in this area; contact has been made with a number of schools, with positive discussions on how the Open University could run activities tailored to each of the school’s needs.

Richard Holliman (University Champion for Public Engagement with Research) from the OU has also attended a Head of Sixth form meeting to publicise the project and discuss examples of activities that could be run within schools, which was very well received. The uptake from schools is now growing as they become more aware of the project and are able to see the positive impact of our work across Milton Keynes.

In promoting the project, its four main strands – Open Lectures; Open Dialogues; Open Inquiry; and Open Creativity – have been discussed with schools (see ‘Activity framework’ page at http://www.open.ac.uk/engaging-opportunities). As this year has progressed, these activities have been developed and more researchers have signed up to run them, enabling us to promote activities earlier within the coming school year.

In addition, we are developing a range of more specific activities which better fit the needs of the school, alongside the more generic options. This, coupled with planning to allow for the long lead in time that schools need, will enable us to secure a wider engagement and extend our reach.