Late last year, pupils from St Paul’s Catholic School in Milton Keynes gathered only 3 miles away from Bletchley Park, where Alan Turing famously cracked the Enigma code during the Second World War, to take part in their own code-breaking challenge.

Small teams of Year 9 pupils battled it out in a series of tasks requiring them to decrypt secret messages as quickly as possible.

The event was organised by me and my fellow Open University maths PhD student and STEM Ambassador, David Martí Pete. We were aiming to give pupils a broader sense of what maths is really about: solving problems.

Although our research is not in the area of cryptography, we both feel that logic and problem solving are by far the most important skills used in our day to day life as maths researchers, and are also skills that are highly sought after by employers.

During the two hour session pupils encountered a series of increasingly difficult codes, from simple substitution cyphers, where each letter of the alphabet is simply replaced with another, through binary number coding, to the final ‘mystery cypher’ challenge that required pupils to analyse the frequency of letters occurring in the coded passage.

It was great to see pupils thinking outside the box, and they came up with some really innovative ways of tackling the challenges. What we liked best though was how well the pupils really came together as teams, nominating team leaders, dividing up the work where appropriate, and supporting and encouraging one another.

The competition was close, with all teams finishing within a few points of each other, and we actually had a tie for first place. 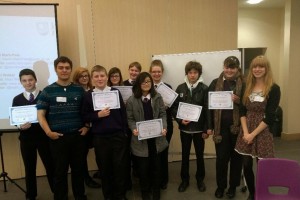 The winning teams from St Paul’s Catholic School in Milton Keynes, with Mairi and David

All pupils worked hard though, and definitely earned the certificates they were presented with at the end of the session.

Being so close to Bletchley Park really helped to put the session into context, and we spent a bit of time discussing with pupils the events that took place there during the Second World War.

The timing of the workshop was perfect too, as it was shortly after the release of The Imitation Game, a film looking into the life and work of Alan Turing, and just before the opening of registration for the 2015 Alan Turing Cryptography Competition.

This competition, which begins today (26th January), is open to teams of school pupils up to Year 11, and involves solving a series of cryptographical problems much in the style of our workshop.

To find out more about the competition, or to register a team, visit the 2015 Alan Turing Cryptography Competition.

Our ‘cryptic challenge’ workshop was based loosely on one developed by the University of Leeds as part of a HEFCE funded More Maths Grads project.