Scroll down to the end of this post to download your copy of the snakes and ladders of social media.

In May 2014, I began work with Helen Donelan and Clem Herman (Faculty of Mathematics, Communication & Technology) to create a workshop for the Open University’s 3rd Annual eSTEeM Conference.

Helen and I work in complementary areas: Helen in enhancing professional networking and engagement by exploring the activities of academics using social media; and me, as part of the Public Engagement with Research (PER) Catalyst, exploring researchers’ understanding of engaged research and how it is mediated through digital technologies.

The initial workshop at the eSTEeM workshop

Bringing together the two strands of our research through the eSTEeM workshop, Helen and I encouraged participants to think about how they currently use digital media professionally, how they could use digital media to support their role and what support they would need to realise their goals for digital engagement.

To encourage discussion, we adapted the format of a board game and created the first prototype of ‘the snakes and ladders of social media’. 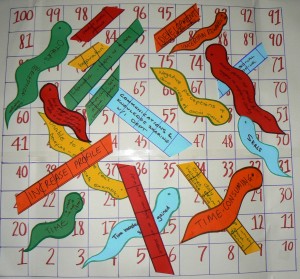 The first version of the board: barriers and motivations

I later reviewed the workshop in a post for the OU’s Engaging Research blog.

Initially, the game was played in three stages; a fourth was added following feedback from players. 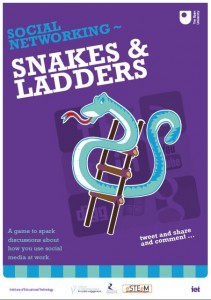 We found that the intimacy and well-understood etiquette of a board game – taking turns, moving forward, conversation – promoted relaxed and rich discussion, and it became clear the game had potential to be used beyond one workshop.

The game has since been used and refined in a variety of contexts and with researchers from post-graduates to professors. For example, researchers at the Institute of Education’s Newsam Library & Archive read my blog post about the eSTEeM workshop and adapted the game for a team meeting focused on how to better promote their services and collections to users via Twitter.

The Senior Librarian commented: “Sitting round the table over a board game fostered just the right kind of lively atmosphere.” 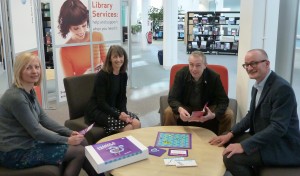 Following feedback on these workshops another prototype was tested by researchers from the OU’s Science Faculty over coffee in their common room. The game has also been used in workshops for postgraduate researchers studying within the NERC-funded CENTA and AHRC-funded CHASE Doctoral Training Programmes, respectively.

The success of these workshops led us to explore the potential to produce the game for sharing more widely across the HE sector.

Designing the board game
We have worked with a graphic designer, Peter Devine (IET) and Richard Holliman (Science), to develop a traditional boxed board game. We have designed a board, cards and instructions for playing, as well as a poster, meaning the game can be used for workshops, training, or department/faculty discussions.

All you need to provide is the counters.

Build your own game
All the elements of the game, including the instructions, are freely available as open access .pdfs under a Creative Commons license (see below). 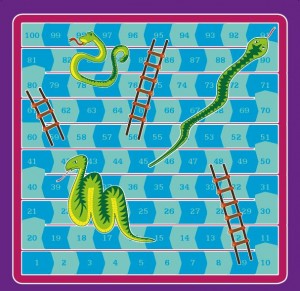 The snakes and ladders board. Design Peter Devine

You will need one copy of the game for between four and six people.

We’d be delighted to hear your thoughts on the game. Please email them to us using the details on the contact page.

These resources were produced as part of the Open University’s RCUK-funded Public Engagement with Research Catalyst, ‘An open research university‘. Ann Grand was a Research Associate on this project, contributing to the work package that explored the digital attributes of engaged research.