What is a Labcast?
A ‘Labcast’ is an interactive, live web broadcast that integrates video streaming and instant messaging to enable a conversation between two or more locations.

A short video explaining the concept of a Labcast can be viewed in the short video below.

3. Does not require students to be taken off timetable or transport costs to be found.

4. Has fewer implications for laboratories that are heavily used.

5. Contextualises researchers and their science in an authentic working environment.

Labcasting the Rosetta Mission
Here we describe the use of a Labcast to deliver a 1-hour physics lesson to an A-level class of 25 Denbigh School students in Milton Keynes from a laboratory at the Open University’s Walton Hall Campus. 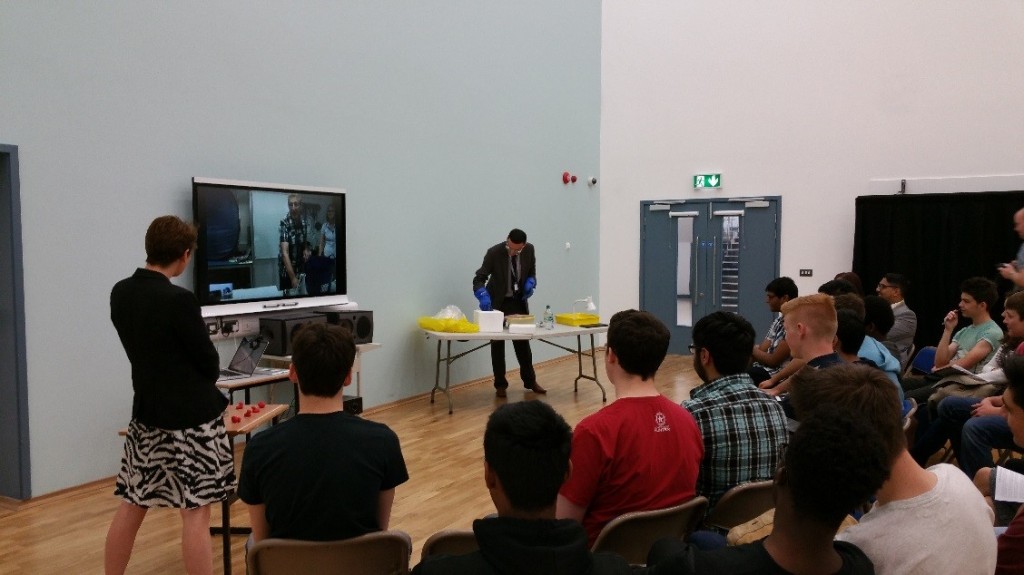 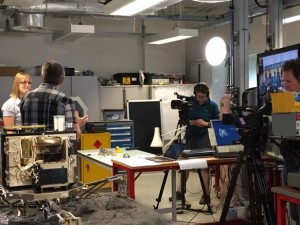 Engaging students with the curriculum via ‘cutting edge research’
The Open University researcher (Dr Simon Sheridan) is a Rosetta Mission scientist who had been involved in the design and build of the OU’s Ptolemy instrument on-board Rosetta’s Philae lander.

Simon was actively engaged in interpreting data from the comet’s surface. Some of this data was used in the Labcast having just been published in the world-leading academic journal Science.

The laboratory used for the Labcast was that used for testing the Ptolemy ground reference models, providing authenticity.

Provide development activities for teacher and researcher
Both the teacher (Jenny Hallam) and researcher used this activity as a career and professional development (CPD) activity. They collaborated on the development, design and delivery of the scheme of work for the Labcast, sharing pedagogical approaches and subject knowledge. They also gained the experience of engaging with others using a novel mix of media. 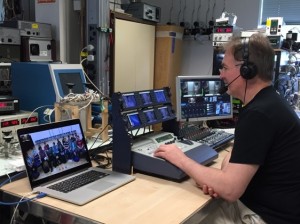 The technical team mixing the live stream and other content. Photo: Vic Pearson.

Technology
The Labcast was recorded by three audio-visual experts led by Dr Trevor Collins. The team used static and roving cameras, and was broadcast as a high-definition video stream via FaceTime.

Third party videos (for example, from ESA and NASA) were incorporated into the live stream and a webcam relayed a view of the classroom back to the lab. Students and presenters interacted using FaceTime.

Content and structure
The Labcast incorporated passive elements, for example, presenting to camera, interview-style dialogue; and interactive elements, including a lab experiment mirrored in the school, a maths workshop, and a problem solving activity. A pre-Labcast activity was set, which meant a group activity was possible, and time for Q&A was built in.