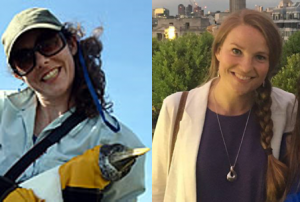 As participants of the first set of NERC-funded workshops on engaging research in 2015, we were delighted to hear that Richard Holliman and Clare Warren were repeating the workshops at the Open University and wanted us to return as trainers.

It was back in 2015 that we attended the course, learning how to communicate our research more effectively and how to engage stakeholders with our research. This included spending time experimenting with language and using metaphors to explain what our research was about and who could use it in outside of academia.

It was the first time that many of us spent quality time thinking about how our research could be engaged with other researchers, NGOs and industry; an exchange of knowledge that would improve our research quality and increase the impact of our work.

Kate Baker
For me, the initial workshop where I attended as a participant gave me confidence to pursue some side line projects, including making films of my research and building up Intrepid Explorers, a platform created for researchers to share experiences and learning from the field.

Since the course, I have now completed my PhD and I’m working as a Research Fellow at Exeter University in the Centre for Water Systems with a significant part of my workload assisting with the industrial dissemination strategy of an EPSRC fellowship.

Returning to the Open University as a trainer on the engaging research workshop was another productive and wholesome experience. I learnt a lot from working ‘behind the scenes’, observing how Rick and Clare created a varied schedule which meant students had to use, and learn, a variety of skills – including debating, presenting, engaging their research, communicating, story-telling, filming, and interviewing.

As trainers, we were given preparatory training, where we were introduced to the course and given ‘top tips’ on how deliver information in a meaningful way.

During the course, there was time to develop our facilitation skills and have fun helping the PhD students create films about their research. Below is a link to one of the films the postgraduate researchers produced.

Lucy Garrett
I can’t quite believe that a whole two years have passed since we initially undertook the engaged researcher training at the Open University. Taking part in the course again, from the ‘other side’ really highlighted to me how influential the course has been throughout my PhD.

Some of the things that stand out as having had a lasting and continual impression on the way I approach and undertake engagement are an increase in confidence in explaining my research to a varied and wide ranging audience. I feel that I have developed a greater understanding of what engagement is and how to tailor the types of engagement activities I undertake to my future aspirations and development.

Lastly, the confidence that I have gained through the course and since undertaking it, has meant that I am not afraid to take on new opportunities and push myself outside of my comfort zone, which has led to some really exciting developments and collaborations during my PhD.

Acting as a trainer on the course was a great experience, and I hope that our experiences, two years on, were useful for the new participants who were at the early stages of their PhDs.

Having put the course into action, I felt that I could really add to the information which was presented by Clare and Rick during the course in a meaningful way. 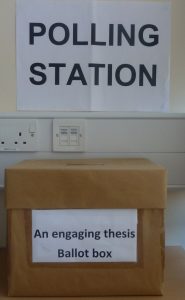 ‘An Engaging Thesis‘; a good or bad suggestion?

A particular favourite moment for me was being the bad-cop to Kate’s good cop in a hustings debate on ‘An Engaging Thesis‘ – the idea being that part of your thesis should include a chapter or section on the impact and dissemination of your research through engagement activities. I think both sides of the argument have their points and I guess time will tell if it materialises.

Whether or not engagement becomes a formalised part of your thesis, I still believe that it is an essential part of a PhD, and I hope that the attendees on the course are able to put their new skills into action, which judging from the talent they showed at presenting their research on camera, I’m sure they will!

Below is a link to one of the films the postgraduate researchers produced.

Acknowledgements
The professional development workshops discussed in this paper were funded by NERC through an Innovation Award (NE/L002493/1). Victoria Burton (Imperial College), Kerry Reid (Open University) and Georgia Hole (University of Oxford) helped to deliver the second and third the three workshops, respectively. We are particularly grateful to Sara Kinahan, Liz Lomas and Michelle Aitken for their support in developing and organising these workshops.

Where relevant we have drawn on research findings and experiences from other similar workshops funded through an award made as part of the RCUK Public Engagement with Research Catalysts (EP/J020087/1) and a further award made through the RCUK School University Partnership Initiative (EP/K027786/1).