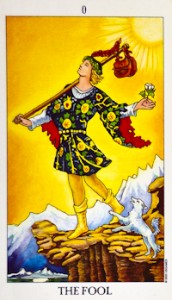 The Fool steps out with gay abandon...

In my paper I will be exploring otherworldly encounters, because in my fieldwork I find my encounters often involve discarnate entities – spirits, spirit guides, angels, that sort of thing – and I wanted to use the conference as an opportunity to try and reflect on how we can account for such unaccountable encounters in the research process.

I’ve written before on this blog and in academic papers about the difficulty I sometimes have in convincing other academics that it doesn’t matter whether these encounters are ‘real’ or not. What matters is the impact that experiencing such encounters  – ‘real’ or otherwise – has on those people who experience them. Yet my colleagues are often too busy trying to ridicule or laugh off the very notion of such otherworldly encounters to stop and acknowledge that even things we might consider ‘not real’ can have very real impacts.

In my fieldwork I participate fully in the activities I research – so I’m not just being told about these encounters and I find I am frequently encountering the unexpected myself as a result.  Tomorrow I’m going to be talking about my experiences of being a tarot student as part of my research, and it will be interesting to see what feedback I get as I haven’t shared this with an academic audience before! Yet the fact that I am sharing it shows that I’m gradually learning to become more fearless in the way I talk about these encounters with fellow academics – because they are encounters which I believe can tell us a lot about what it means to live in a modern world which, for growing numbers of people, is actually far more enchanted and mysterious than we might at first imagine. The sociological imagination needs a way to see that and capture it, and as academics we need to find a way to be able to write about it and represent it which is sensitive to the experiences we uncover, yet at the same time remains academically credible. And that is what I would like to explore.

I just hope sharing my otherworldly encounters with this particular audience doesn’t prove to be a regrettable encounter for me..!