The city of Stoke-on-Trent hides a unique history of Spiritualism. The earliest written evidence of local Spiritualism is from a newspaper article in the Staffordshire Daily Sentinel in 1873. Since then the city has enjoyed a rich and vibrant Spiritualist history.

From the Victorian era, the possibility of spirit communication and psychic phenomena attracted the attention of scientists and intellectuals, and during World War I Spiritualism reached a new height of popularity across Britain. With so many young men failing to return from the front, many sought mediums to obtain some closure.

Well known figures came to Stoke-on-Trent to seek such conversations with the dead. Sir Oliver Lodge attended several séances, one of which was with medium Annie Brittain in Stoke-on-Trent, shortly after his son Raymond died at the front on 14 September 1915.

Sir Arthur Conan Doyle also visited Annie Brittain, particularly after the death of his son Kingsley at the Somme in 1917, and again following the death of his younger brother Innes in February 1919, who had served as a brigadier general in World War 1. 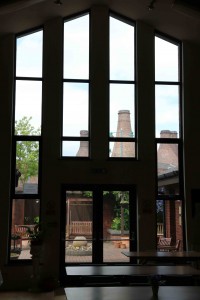 Window on the soul: Looking from Longton Spiritualist Church towards Gladstone Pottery Museum

It was also Annie Brittain who told Longton medium Fanny Higginson that she would have a son who would grow up to be a famous platform medium. Gordon Higginson was born in 1918 and went on to become the longest serving president of the Spiritualists’ National Union for 23 years.

With such a rich history, is it any wonder that even Stoke-on-Trent’s very own Robbie Williams once said if he hadn’t made his career in music he might have been a Spiritualist medium instead? No doubt any one of the three Spiritualist churches still very active in Stoke-on-Trent (Burslem, Fenton and Longton) would welcome him into their congregations with open arms!

Find out more at ‘Talking With The Dead’ an exhibition on Spiritualism in Stoke-on-Trent at Gladstone Pottery Museum, Stoke-on-Trent, 1 September to 31 October.

And don’t forget to share your experiences of Spiritualism, Stoke or the exhibition with us using #SpiritofGladstone