Robbie, angels and an enchanting history: Locating Spiritualism in the modern world 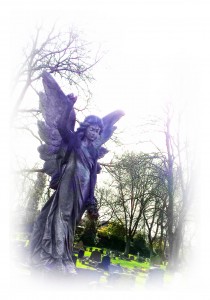 According to the 2011 Census, 59% of the population of England and Wales describe themselves as Christian, a decline of about 11% since 2001. On the other hand, although the numbers remain small, those choosing to register themselves as Spiritualist showed an increase of about 21%.

The first Spiritualist church in the UK opened in 1853 in Keighley, Yorkshire, and the first national conference of Spiritualists was held in Manchester in 1890. As well as having dedicated buildings, early Spiritualist groups met in school halls, working men’s clubs and medium’s own houses. Today the Spiritualists’ National Union has about 350 registered Spiritualist churches and centres throughout the UK.

For many, however, the ‘hub’ of Spiritualism in the UK is somewhere better known for its ceramics and oatcakes than its spiritual side… 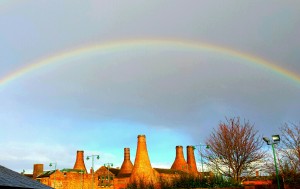 The longest serving President of the Spiritualists National Union was Gordon Higginson, and he was born in 1918 in Longton, Stoke-on-Trent, Staffordshire. His mother, Fanny, was already an established medium at Longton Church and, like her, he went on to serve there until his death. Today Longton Church’s website claims it ‘is one of the leading centres for Spiritualism.’

Stoke-on-Trent, famous for its Victorian pottery industry, and making the world’s finest bone china, lives in the shadow of its past glories. Affectionately nicknamed ‘The Potteries’, this area is now most famous for its post-Pottery decline and for being the most working class city in the UK (Edensor 2000) – and, of course, the birthplace of Robbie Williams!

The hidden enchantments of a spirited Stoke..?

Stoke was also the setting for Arnold Bennett’s Anna of The Five Towns, where he describes it as both squalid and enchanting:

“The entire landscape was illuminated and transformed by these unique pyrotechnics of labour atoning for its grime, and dull, weird sounds, as of the breathings and sightings of gigantic nocturnal creatures, filled the enchanted air… nothing can be more prosaic… yet be it said that romance is even here – the romance which, for those who have an eye to perceive it, ever dwells amid the seats of industrial manufacture, softening the coarseness, transfiguring the squalor, of these mighty alchemic operations.”

Despite Bennett describing Stoke-on-Trent as having an ‘enchanted air’, this is a city that is dominated by its intractable struggle to reverse industrial and economic decline. In recent years Stoke City Council has tried to reinvigorate the region and its popular image both by drawing on the city’s industrial heritage and by redesigning Stoke as a city of culture.

This image of Stoke, however, and the almost exclusive emphasis on its pot-based past overlooks another important and continuing aspect of its cultural heritage, namely Spiritualism. In the 1960s, whilst the number of potbanks was declining daily, there were twelve very active Spiritualist churches. This, together with it being the home of Fanny and Gordon Higginson, made Stoke-on-Trent the national hub of a thriving Spiritualist movement. This legacy, together with the active life of the city’s remaining Spiritualist churches today, represents a hidden enchanted, whilst simultaneously ordinary, heritage for those who have, as Arnold Bennett puts it, ‘an eye to perceive it’. 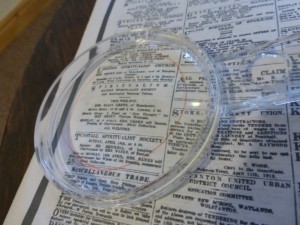 The earliest written evidence of Spiritualism in Stoke-on-Trent is from a newspaper article in the Staffordshire Daily Sentinel in 1873. Since then the city has enjoyed a rich and vibrant Spiritualist history with some well-known faces. In the Victorian era, the possibility of spirit communication and psychic phenomena attracted the attention of scientists and intellectuals. But it was during World War I when Spiritualism reached a new height in Britain. With so many young men failing to return from the front, many sought mediums to obtain some closure.

Sir Oliver Lodge, born in Penkhull, Stoke-on-Trent, had several séances in the area, one of which was with medium Annie Brittain in Hanley shortly after his son Raymond died at the front on 14 September 1915. Sir Arthur Conan Doyle also visited Annie Brittain, particularly after the death of his son Kingsley at the Somme in 1917, and the death of his younger brother Innes in February 1919, a brigadier general in World War 1.
It was also Annie Brittain who told medium Fanny Higginson from Longton that she would have a son who would become a famous platform medium; and we already know about what her son Gordon went on to achieve! 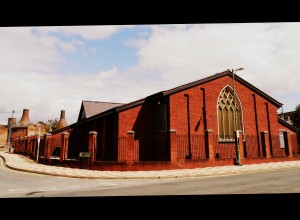 With this rich history, is it any wonder that even Stoke-on-Trent’s very own Robbie Williams once said if he hadn’t made his career in music he might have been a Spiritualist medium instead (the angels would have loved that, Robbie!). 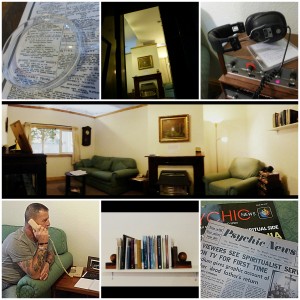 Talking With The Dead

You can find out more about the history and present day role of Spiritualism in Stoke-on-Trent by visiting ‘Talking With The Dead’ at Gladstone, Pottery Museum, Stoke-on-Trent.

Here you will be able to listen to stories about what it’s like to live with spirit in everyday life, you can wander around a Spiritualist’s living room, and you can pick up a copy of our ‘Spirit Trail’ that maps all the sites that have been registered for Spiritualist worship and services across the city between 1870 and 2015. You may be surprised at what a magical and enchanted history this seemingly very prosaic city hides! 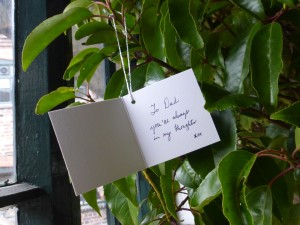