For the Twittersphere ‘My Psychic Life‘ (Channel 4 9pm 4 November 2015) was set up to fail before it even aired. The trolls and the cynics were out in force ready to criticise and attack the poor characters who had opened their lives to the cameras… 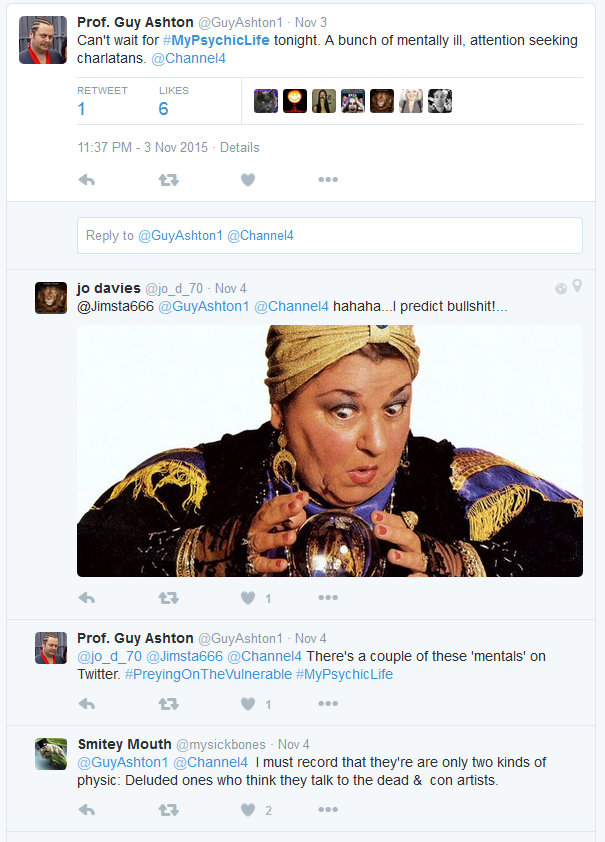 As is evident from the general flavour of tweets, when people hear the word ‘psychic’ they think con-artist, tricksters, frauds and deception.

Unfortunately, as is often the case in sensation-seeking broadcasting (and Tweeters!), this is only addressing one stereotype from what is actually a very broad church. And yes, I use the word ‘church’ deliberately, because Spiritualism as a religion has churches and centres up and down the UK in most towns and cities from Edinburgh to the East End, from Leicester to Lochgelly, Maidstone to Manchester.

But the programme decided to sidestep that more mundane aspect of everyday faith and belief, and leap right into the world of flamboyant psychics on the entertainment circuit. The programmers claimed to want to understand why mediums are more popular than ever, but their approach was like trying to understand feminism in British society by following the Spice Girls around for a day.

The real face of Spiritualism..?

Channel 4 missed a real opportunity here. I’m not sure where they got the figure of a 79% increase in people claiming to be ‘Spiritualist’ in the last census (it’s actually nearer 17%, though considerably higher in some areas). But what they failed to do completely was to explore what that meant in terms of the changing spiritual landscape of the UK. At the same time there was a decline in the number of people registering as ‘Christian’ by about 12% and an increase of 10% in those who said they had ‘no religion’.

The fact that people are abandoning God and finding solace (and entertainment) in mediums is an interesting feature of a complex and changing religious landscape. It deserves more nuanced exploration.

The programme, like so many, made the mistake of equating Spiritualism with people who identify as professional psychic mediums. Yes, there are Spiritualists who earn money as ‘professional mediums’, but this is just a small handful of the thousands of people up and down the country who identify with Spiritualism as a religion. For them this isn’t about flamboyant shows in Blackpool or hooking big London agents. It’s about a personal belief and faith which – like any religion for anybody – underpins their everyday life experiences, but hinges on some things which those without that particular religious frame of reference might find difficult to countenance.

After all, is it any weirder to believe in a man with a big white beard in the sky than it is to believe people who have actually lived can continue to exist in some way?

What is the secret..?

The word Spiritualism was mentioned a handful of times. But Channel 4 did nobody any favours by equating it with a handful of people who resembled more closely the characters in Hilary Mantel’s ‘Beyond Black’ than the very normal people you might find sitting in a Spiritualist Church in a Sunday divine service. A great book, by the way, but one which was written for entertainment rather than cultural or theological accuracy.

The narrator of ‘My Psychic Life’ claimed ‘for centuries their work has been a secretive world’. I’m not convinced the programme did anything to lift the lid on that purported secrecy. Actually, people like Derek Acorah and Psychic Sally have been highly visible for many years, so there is no secrecy around this high profile side of entertainment mediumship. Channel 4 simply reinforced a few more stereotypes and hammered the nails a little deeper into the coffin of Spiritualism for the trolls to delight in.

If there is any secrecy around this world, it is purely because nobody has bothered to ask what it actually means for those who claim Spiritualism as their religion. Through our research project we’ve learnt that Spiritualism is not an evangelising religion, so they won’t come knocking on your door bringing deceased Aunt Ethel with you. But if you have a genuine interest in what it is actually all about, we have also found that the churches will welcome you to join them at one of their services where you’re likely to learn a lot more interesting things about living with spirit than you will have gleaned from an hour watching ‘My Psychic Life’.

Time to spread a little tolerance..?

So let the trolls and self-styled cynics have their fun, because Channel 4 really did hand it to them on a plate; but they should realise that by tweeting accusations that all mediums are delusional, ‘mentally ill’, robbing liars they are mistaking one small expression as representative of a much wider religion (not to mention being rude to the many thousands living with serious mental health issues).

And in modern Britain we are meant to be more tolerant towards all religions (and mental health). I can’t imagine the same people would tweet so confidently accusing all Muslims of being terrorists, for example, but perhaps they would? And whilst the seriousness of the accusation is admittedly on a very different scale, the reasoning and logic behind it is just as narrow-minded and ill-informed. It’s a shame Channel 4 missed the opportunity to enlighten us all…