While in Japan to research a travel book, I spent a night in Hiroshima. Talking to the ‘guides’ who met me for dinner, it emerged both were children of survivors of the atomic bomb but their parents had never talked to them about the blast. I went with my guides to a neighbourhood meeting; hearing that I was interested in war survivors, a 94-year-old woman, who had been attending these meetings for years, stood up and said: ‘I too am a hibakusha’.

Hibakusha – from hibaku (explosion) and sha (person) – refers to the victims of the atomic bomb. Although I had lived and worked in Japan, I didn’t know much about hibakusha. It struck me as extraordinary that this lady had never mentioned the fact of her survival to her neighbours. My guides explained that:

‘Only a relatively small percentage of the survivors of Hiroshima have ever spoken about their experiences.’

As I was to discover, there was a culture of ‘muting’ in the lives of the survivors and their descendants, both at home and abroad, despite the considerable literature and thousands of statements, documentaries and fictions that have built up around experiences of the bombing. Hiroshima and Nagasaki are Japan’s holocaust. As the remaining survivors die, recording their stories, to hand down to succeeding generations, becomes more urgent. 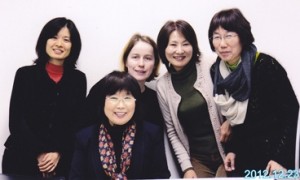 Due to constraints of time and distance, I had to be selective in my approach. I conducted a pilot research project with survivors of the Blitz in Notting Hill, London. Through that research, I decided I would focus on those who had been old enough at the time of the bombing to remember it and who could talk about their experiences without fear of negative feedback from family and social relationships.

I used a model of resilience proposed by Knowles, who had researched hibakusha in both Hiroshima and Nagasaki: ‘Overcoming extreme adverse conditions is a significant aspect of the hibakusha – resilience theory is particularly salient here – it can be defined as “a phenomenon of positive adjustment in the face of adversity”’. This model can be compared to the psychologist Viktor Frankl’s approach. Frankl, a survivor of the Jewish Holocaust, wrote of survivors’ need to ‘make larger sense out of apparently senseless suffering’.

Interviews with survivors in the Hiroshima Peace Memorial Museum, 2012-2014

Armed with a grant from the Great Britain Sasakawa Foundation, I travelled to Hiroshima four times between December 2012 and the summer of 2014 to interview survivors. I knew I would have to overcome many barriers, both internal and external. One of the most important internal aspects of resistance to both telling and recording the experiences of war is traumatic memory. This is often latent and does not emerge until years, sometimes decades have passed. As one writer told me, ‘for them the experience is not over; daily life has not returned’. An artist friend also told me that when drawing a portrait of a hibakusha, they had broken down in tears and he had to halt the project.
I interviewed survivors several times. Interviewing the same person a number of times allowed me to ‘deepen contact’ and re-tell life stories while corroborating facts. For one female interviewee, I had to stop the interview early, because she was overcome but I was able to re-interview her and the final interview was richer for this process:

‘I had only been discharged from the hospital a month before; so to try to remember such heavy things was hard for me’

In later interviews, she revisited her childhood home and met a childhood friend she hadn’t seen for sixty years. She overcame her resistance to remembering during the course of the year. In the gap between interviews, memories of previously untold events – songs, family members and friendships – emerged. Within the structured space of the interview, she freed herself to relive the past, despite considerable psychological resistance to retelling her story.
I knew then that my research methodology worked.

The power of storytelling

A hibakusha who worked with me on translating interviews put into words the purpose of oral history in Hiroshima:

‘The first step – that of telling one’s experience – is a good one, people often become so lonely and they want to die after a disaster like that […] but they get over it by telling their story to children […] when the survivors went to elementary schools to tell the stories I think they found a reason to live again. They said, this is the reason I survived … I could speak on behalf of the dead. I told the story of the bombing. Their feelings of revenge, and so on, changed. Each family I visited showed it was difficult to identify the invisible trauma.

‘I had my own experience of trauma. My brother-in-law – even sixty years after the bombing – did not tell his children he was there, because he was worried that the second or third generation might have something wrong with them. At first Hiroshima people said, “help us, we are so miserable”, but now we are valued consultants. What we survivors have to do is to witness. We have to ask ourselves, what are we trying to hide? What kind of invisible fear do we have?  When we know the answer to that question, then we can find a remedy and a way to get over it.’

The history of Hiroshima

Hiroshima, a city surrounded by wooded hills and parks, overlooks the Inland Sea of Japan, which is dotted with 700 islands. Hiroshima was once ‘Asahara’, a broad, reed-covered delta, before it became known as Hiro (broad), shima (island), named after the many peninsulas which lie between the seven tributaries of the Ota river. For centuries the city was relatively peaceful until the Meiji Government was restored and a railway, and later a port, was built. Hiroshima became a naval base with an arsenal for Japan’s expansionist ambitions at Kure. It was the departure point for troops in the Sino-Japanese (1894), Russo-Japanese (1904) and Pacific wars. In 1944, Hiroshima’s citizens demolished buildings to create fire breaks so that the city did not suffer too badly in the American fire-bombing that began in March 1945. This changed when the atomic bomb was dropped at 8.15am on Monday 6th August 1945. Of an estimated 400,000 people living in Hiroshima, more than 300,000 were affected.

After the war, very little information on the effects of the atomic bomb was released, due to US occupation censorship. Not until the 1960s did Hiroshima receive reconstruction aid from the Japanese government and the hibakusha start to be acknowledged. The city grew and flourished into the ‘green’ city it is today, with its Peace Memorial Park and Museum in what was once downtown Hiroshima.