Another week of media training, this time looking at space science! 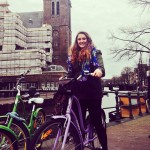 Monday
I worked today with the new group of media students from Walton High. I got the chance to meet them last week at the briefing but in the space of a week had managed to forget everyone’s names; obviously not my strong point.

Monday is always the day that the students learn how to interview. Luckily I managed to get out of being the guinea pig and instead got to watch Manisha, the teacher, squirm.

Although very shy to start with the students slowly started to come out of their shells a little, especially when put in front of a camera. 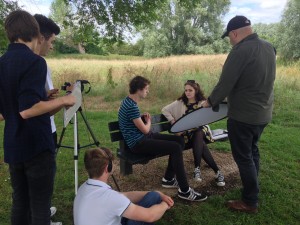 When interviewing each other we discovered that one of the students had published her book on Amazon. I was incredibly impressed by this as the author is only 17.

Tuesday
This was the day of the bottle rocket challenge, run at Denbigh School. A fun day not just for the students, but also for the excited academics and intern!

It started off with the young people designing and building their first prototype rockets. These didn’t go very far, however they learnt a lot from each rocket they made. During the testing of the rockets they documented each change to the design, pressure or amount of water in the rocket. After the success of last year’s challenge we decided to up the game a little bit. 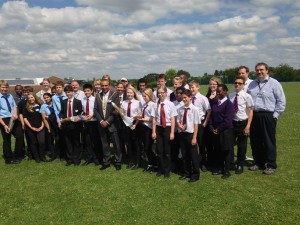 Instead of just trying to get their rockets the furthest distance, they also had to design another rocket for accuracy.

About half-way through the day, St Paul’s school managed to get their rocket the furthest for the whole day reaching around 115m. It would have gone much further, however it managed to reach the fence.

This was challenged later in the day by the Walton High team who managed to get their rocket 97m. It wasn’t as far but it was certainly close enough to scare the St Pauls team.

When the competition came around, all the schools did incredibly well. Unfortunately, no one went quite as far as St Pauls did earlier in the day.

Walton High were the best for accuracy throughout the day, setting a record during testing of 1m away from the target.

I can tell all of you are desperate to know who won. Drum roll please… WALTON HIGH! They managed to get the closest, and came second with the distance their rocket flew. They also did very well in their presentations to the judges, describing how they had used the data they collected to inform the design of their rocket.

Wednesday
I went to Walton High today to help the students with their planning for the filming on Thursday. First, however, we met at the OU to look at possible filming locations.

These centred on the Robert Hooke building, because it is essentially the Rosetta hub at the OU, where all the great minds behind the Ptolemy instrument on board the Rosetta are working away.

It was great to look around the labs and look at the different instruments and experiments. After this we quickly ran back to Walton High to start the planning.

The students really knuckled down to the task. I worked mainly with the group focusing on the technology angle for their film. Not being a scientist I felt slightly out of my depth, but found myself learning along with the young people about the Ptolemy instrument and Rosetta mission.

Then Rick turned up to help with the overall pitches and the questions for interviewees. By the end of the day the young people had got everything they needed to start their filming on Thursday. 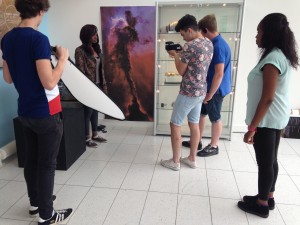 Today we began the filming starting with the interview with Dr Andrew Morse. Whilst my team were working on this interview I went up to one of the labs to watch the other group whilst they interviewed Dr Dan Andrews. This group were looking at the human angle for their film and Dan gave some very heart-warming stories. I won’t ruin them for you though!

Meanwhile, Rick was meeting with one of the OU’s communications team to produce a press release for local media, to be published with the videos.

Once the first interviews were completed groups then moved on to interview Dr Stephen Lowry, who had travelled from the University of Kent to partake in these interviews. Lots of pressure for the young people to make it a good interview!

At this point the competition started; both groups wanted their film to beat the others. This was also the moment that we realised the differences between the groups. The technology group were much more serious about the filming, whereas the human angle group had more fun with it.

Neither of these are wrong but it was interesting to see the clear differences between the groups. This rivalry continued throughout the day, pushing each group to try harder.

The technology group quickly finished off their pieces to camera and started their interviews with Dr Taff Morgan and Professor Ian Wright. The work these two people do is incredibly interesting and I found myself really listening to the interviews.

The whole day was really fun. I like to think the students had fun as well, although they had much more to think about then I did. Once the day was done both groups were completely drained just showing how much effort they had put in.

Friday
Time to edit the films! From what I learnt after the last training, this is a hard day for the students. A lot of concentration is needed to get the films to the standard they need to be. 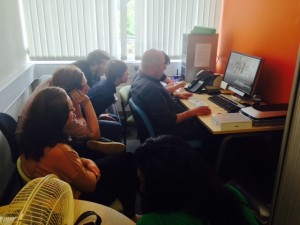 It’s interesting for me to watch these young people learning and developing new skills under the watchful eye of the media team. This pushes their abilities and challenges any skills they think they already had. When watching the rough cuts back it is clear that they’re going to make two very strong films.

What a month!
This is my final post. My internship is now finished and I must go out into the big bad world hidden outside the Open University. I want to thank Richard Holliman for giving me this amazing opportunity. As someone who has just left university it has given me a significant advantage over my peers and I can only thank him for this.

So I must bid a sad farewell. Please keep looking at the Engaging Research blog and watch out for the finished videos from the media training workshops. I hope you enjoy watching them as much as I enjoyed helping to produce them.