Earlier this year members of the Religious Studies department – Dr John Maiden, Professor John Wolffe and Dr Gavin Moorhead – were awarded an ‘Engaging Research’ award by the Open University for their work on the ‘Building on History: Religion in London’ project. With this in mind, now seemed a good moment to reflect on the project.

The project was a knowledge exchange initiative, running between January 2012 and January 2013, which engaged religious publics in London with recent scholarship on the the city’s modern religious history.

Funded by a £95,071 Arts and Humanities Research Council grant, and in partnership with Royal Holloway, University of London, the project ran a programme of public seminars and workshops, and developed a suite of web resource guides. Over the course of the period, Building on History engaged with various stakeholder groups from within London’s far from homogenous Jewish, Muslim, Black Majority Church, Anglican, Baptist, Methodist and Roman Catholic traditions.

The intention of this engaged research was threefold. First, to enhance historical understanding within each of the seven religious traditions of their history in London; second, to promote inter- and intra-religious learning and dialogue about historical religious diversity in London; and third, to foster greater participation amongst religious publics in research into London’s religious histories and heritages.

Seminars were held focusing on each broad religious tradition, highlighting the flourishing academic study of religion in London and showing how various historical themes – such as migration and religion, religious place-making, and community relations – have strong present-day resonances.

For more details about the project, select the following video.

With the support of the National Archives, there were two ‘Exploring and preserving history’ workshops for Muslim and Black Majority Church groups on developing archives for places of worship and collecting oral histories of the ‘pioneer generation’ of post-war Muslim and Black Christian communities. The project also developed two pilot schools projects, with The Urswick (Anglican) School, Hackney, and St Mary’s Roman Catholic School, Uxbridge, on local religious histories. 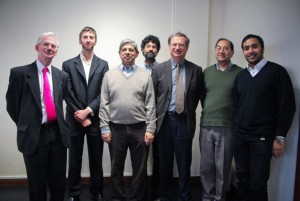 A unique aspect of the project was the way in which it not only working ‘within’ broad religious traditions, but also brought stakeholders together for intra- and inter-religious public engagement events on the history of London’s religious diversity. These events provided an excellent opportunity to explore not only potentially ‘difficult’ histories, but also uncover the ‘hidden’ histories of religious cooperation and in-common stories (for example shared/similar histories of migration and religious institutionalisation).

The Religious Studies department continues to explore ways of developing the relationships established during this project, with various funding bids planned or in the pipeline…so watch this space!

Acknowledgements
The Engaging Research Award Scheme was funded as part of the OU’s RCUK-funded Public Engagement with Research (PER) Catalyst, ‘An Open Research University’.

We will be running a second round of the scheme in Autumn 2014; watch this space for further details.