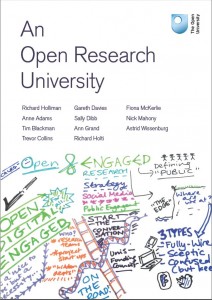 Through this process of reflection I’ve been struck by some of the similarities between the issues Martin and his colleagues in IET have been exploring in relation to openness and the work we’ve been undertaking to embed the practices of engaged research within the OU’s research culture.

A battle joined
First and foremost, it’s clear to me that there is an ongoing battle to be won both for open and engaged research. Universities need to introduce measures to incentivise, support and recognise excellence in engaged research. But universities are not the only stakeholders that need to change. For a culture of engaged research to be sustainable in the medium to long-term also requires ongoing recognition and acceptance of its progressive value(s) by researchers, funders and ultimately, policy-makers.

A focus on practice
A second similarity with the work of Martin and his colleagues work lies in a focus on scholarly practices, exploring how they are changing and, crucially, what measures could be introduced to catalyse change with the aim of further embedding and extending the practices of engaged research.

In our project we adopted an action research approach, working collaboratively with researchers at all levels across the institution to identify and implement strategies that work for them and the stakeholders, user communities and members of the public that engage with their research. As such, we worked from the premise that rather than impose solutions, we would offer advice and a supportive framework where researchers and their publics could define engagement on their terms; in other words to offer consistency within diversity.

We employed a combination of surveys, interviews and interventions to identify a number of challenges and proposed solutions to address them. For example, we found that researchers have a relatively narrow view of engaged research and the communities with which they interact and very few researchers strategically evaluate their engaged research activities (Grand, et al. 2015).

Our final report documents some of the interventions we have introduced with the aim of broadening and deepening future researcher engagement, including a definition of engaged research and revised promotion criteria that include knowledge exchange profiles.

In the conclusion to our report I argue that engaged research will only be prioritised on a sustainable basis if researchers:

These requirements place responsibilities on universities, researchers and funders, but also on politicians.

Progress has been made on all three counts through the Public Engagement with Research Catalyst initiative, but further work is required for these approaches to become fully embedded within cultures of research. This requires political leadership to give funders the confidence to support excellent, progressive and sustainable approaches that meaningfully engage stakeholders with research to generate emergent benefits, effects and changes.

Holliman, R. and Davies, G. (2015, in press). ‘Moving beyond the seductive siren of reach: planning for the social and economic impacts emerging from school-university engagement with research’, Jcom

Acknowledgements
This project was made possible through the Open University’s RCUK-funded Public Engagement with Research Catalyst, ‘An open research university‘.

Eleven authors were involved in co-producing the final report: myself, Anne Adams, Tim Blackman, Trevor Collins, Gareth Davies, Sally Dibb, Ann Grand, Richard Holti, Nick Mahony, Fiona McKerlie and Astrid Wissenburg. In addition, Eileen Scanlon and Hide Stephansen were core members of the project team. The different voices of these authors represent some of the diversity in how engaged research is being conceptualised in different academic domains at the Open University.

We are grateful to a large number of Open University staff for their contributions to our Public Engagement with Research Catalyst, also to our Advisory Board, and to colleagues from the other seven Public Engagement with Research Catalyst universities. We have acknowledged as many of these contributors as our failing memories could recall on the inside covers of the final report (Holliman, et al. 2015).