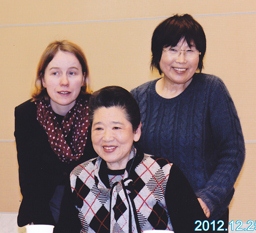 In a recent talk at the British Sociological Association Conference at the British Library in December 2015, I outlined how I developed a research methodology which allows for the voices of survivors of Hiroshima, known as ‘hibakusha’, to be heard, and their subsequent written-up texts to be analysed within the framework of ‘coercion and consent’.

The discussion resulted in an forthcoming article tentatively titled ‘Telling the narratives of Hiroshima’ in the Auto/biography Yearbook for the British Sociological Association for June 2016.

One of the interesting aspects of my research is that survivors have been happy to be named rather than remain anonymous: oral history work with the hibakusha can be seen to be rather different from other situations, where the collection of data or indeed evidence, for instance for legal or medical research, is concerned. The hibakusha have already given consent for their stories to be disseminated in written, verbal and recorded form; the hibakusha ‘shogensha’ or storytellers, who I selected for interview, all desire their names to be known. 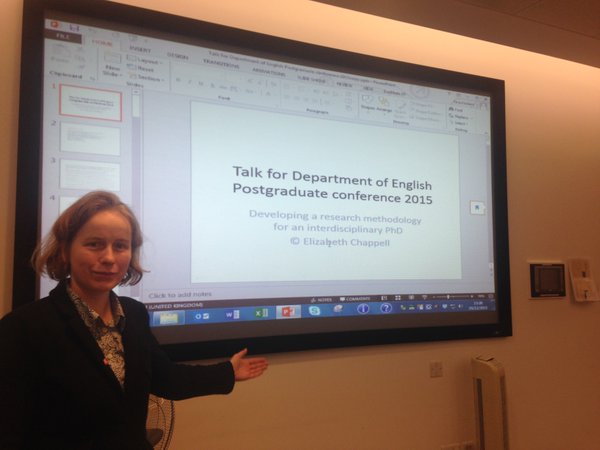 Elizabeth Chappell giving a talk on research methodology at the Open University, 5 December 2015.

A pilot study enabled me to select interviewees and I followed this with requesting permission to research, transcribe and publish stories through the use of consent forms. I also had an on-going dialogue (each interviewee was interviewed more than once and some I am still in touch with). Consent, in fact, took the form of a continuous and deepening process of back-and-forth between interviewer and interviewee.

Life story interviewing
Hibakusha experiences have been described as testimonials (shogen) or experiences (taiken); This implies possibly a legal or religious overtone whereas ‘accounts’, ‘life histories’ or ‘life stories’ leaves room for what has not been predicted, what is contingent as well as a work-in-progress.

As a researcher into life stories, I have had to become sufficiently acquainted with the social and cultural world of the interviewees to engage with them through a full examination of the local context.

Over the course of my research, I have spent two months in Hiroshima. I not only researched the background to the interviewees’ lives using the archive, I also returned, with the interviewees, to the place where they had experienced the atomic bomb.

Through co-construction of the narratives and a model of interviewing which is ‘dialogical’ within qualitative research, memory is seen not a ‘warehouse of the past’ and the self is neither ‘fixed’ nor a ‘production’. Instead, memory and identity are rather an interactive process, open to change. Both memory and identity, while not fixed, are vital for reshaping attitudes to the end of World War Two.

Here is an overview of my work, discussed at a seminar held at Cardiff University (video length 1 hour 20 minutes.)

To read my blog, select: http://elizabethchappellopenuniversity.com

I recently had the opportunity to talk about my research on BBC World TV for the 70th anniversary of the end of World War Two. A link to the video is embedded below (video length 5 minutes; with apologies for poor sound quality in places).