A host of heavenly angels… in Nottingham? 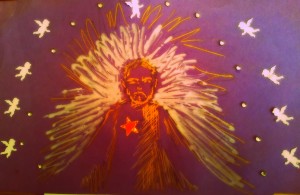 Yesterday we did ‘research speed dating’ at work. It could have been history’s dullest and shortest lived affair, but actually it was fascinating. We each had 5 minutes, strictly timed, to talk about our research passions.

What I am passionate about as a researcher is exploring the worlds of people who live with spirit in their everyday lives. And I mean literally with spirit, not just with pictures of angels or statues of deities, but with spirit itself, in the form of angels, spirit guides, nature elementals crowding into every nook and cranny of their everyday experiences.

So I talked about this, about how people take spirit guides to work with them, have angels they talk to on a regular basis and communicate with the departed by talking to spirit. Most of my colleagues in this research-speed-dating-challenge talked about sensible, tangible research interests, like poverty, care of the elderly, the built environment.

But I chose to speak about angels and spirit guides.

I wouldn’t have done this 12 months ago through fear of ridicule, but I’ve become more confident in speaking openly about my research interests, and about the methods I use to explore these worlds. I find I’m still met with incredulity though. And someone said afterwards to me, ‘You know, I actually know someone who actually believes in all this stuff!’ And he looked at me as if I was meant to say, ‘Yes, crazy isn’t it!?’

But it isn’t crazy – because these angels and spirit guides make a real difference in the lives of people who live with them. They help them cope better with those material and tangible problems of everyday life, like poverty, getting old or a poor built environment. So should they not also be considered a legitimate part of what we explore as social scientists in order to better understand the modern world?

Another colleague came up at the end and told me about an article she had read about angels, and she sent me the link. It’s by Tim Adams in the Observer, and is based on an interview with Lorna Byrne who has seen angels since she was a young child. Tim Adams points out that 31% of British people believe in angels, and 5% of people claim to have actually seen or spoken to an angel. Except in Nottingham. In Nottingham 17% of people have seen or spoken to an angel. So whatever is going on in Nottingham, it’s clearly the place I should go to next on my research quest to understand the real place of angels in modern society!

Of course we’re not alone, people live with spirit around the world, and that leads me neatly to the announcement that the next posting on this blog will be a guest spot by the wonderful Professor Charles Emmons of Gettysburg College, USA. Charles will be writing about his experiences as an academic researching otherworlds… It’s good stuff, don’t miss it!

8 Responses to A host of heavenly angels… in Nottingham?