Under the spell of Stoke-on-Trent? Potbanks, Spiritualism, and the hidden history of a city…

What’s your image of Stoke-on-Trent?

What (if anything) do you associate with the city of Stoke-on-Trent?

‘The Potters’ and their Britannia Stadium?

Josiah Wedgewood, ceramics and the industrial decline of the potbanks?

But would you associate it with one of the fastest growing religions in the UK? For this unique conglomeration of industrial towns is also home to a flourishing Spiritualist movement.

Is there anybody there? 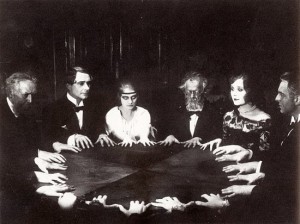 Seances and Spiritualism in the popular imagination (source: The Pennington Edition)

It’s often assumed that Spiritualism is a religion of the past, enjoying its heyday in the first half of the twentieth-century and since fading into the margins of cultural obscurity. However the number of people describing themselves as ‘Spiritualist’ in the 2011 Census showed an increase of about 21% from 2001 (during the same period there was a decline of about 11 per cent in the number of people describing themselves as ‘Christian’).

Although overall numbers of Spiritualists remain small, there is no doubt that Spiritualism is alive and well. And in Stoke-on-Trent there are still three very active Spiritualist churches enjoying healthy congregations and playing an important role in their local communities.

Spiritualism is a philosophy and religion based on the belief that the soul continues to live following the death of the physical body and that communication with spirit is possible through the channel of trained spirit mediums. In the popular imagination Spiritualism is dominated by images of fakery in Victorian séances and Derek Acorah being possessed on ‘Most Haunted’. But the everyday reality is much more mundane. People do very ordinary things in Spiritualist churches, like get married or conduct funerals. They attend Sunday divine services and hold fundraising events just like many other church congregations. And in a very similar way to many other religions, Spiritualists will light candles or offer prayers in memory of loved ones who have died… 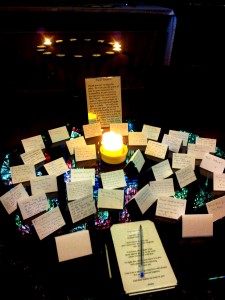 Candles lit in memory of loved ones in a Christian church. 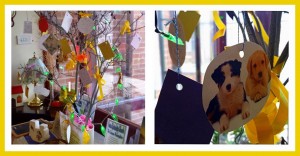 A ‘Memory Tree’ in a Spiritualist church with messages for loved ones.

…but here lies the crucial difference, they might also get a direct message from that loved one in the Spirit world. 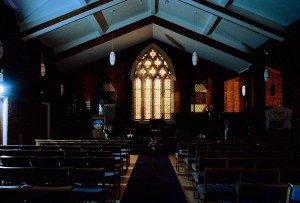 Stoke-on-Trent, famous for its Victorian pottery industry, and making the world’s finest bone china, lives in the shadow of its past glories. Affectionately nicknamed ‘The Potteries’, this area is now probably most famous for its post-Pottery decline and for being the birthplace of Robbie Williams. But it was also birthplace and home to the longest serving President of the Spiritualists National Union – Gordon Higginson – who was born in Longton, Stoke-on-Trent in 1918. His mother, Fanny, was already an established medium at Longton Spiritualist Church and, like her, he went on to serve there until his death. 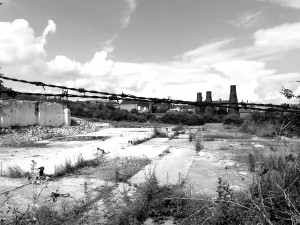 Today Stoke is a city dominated by its intractable struggle to reverse industrial and economic decline and Stoke City Council has tried to reinvigorate the region by drawing on the city’s industrial heritage. But the emphasis on its pot-based past overlooks another important and continuing aspect of its cultural heritage. In the 1960s whilst the number of potbanks was declining daily, there were twelve very active Spiritualist churches in the city. This, together with it being the home of Fanny and Gordon Higginson, made Stoke-on-Trent the national hub of a thriving Spiritualist movement.

SpELS is funded by the AHRC and based at The Open University.