Together, we are co-designing walking routes that showcase aspects of the geological, landscape and ecological evolution of the Chiltern’s AONB. We are particular interested in exploring ways to connect environmental science, people and cultures through ‘storied walks’. 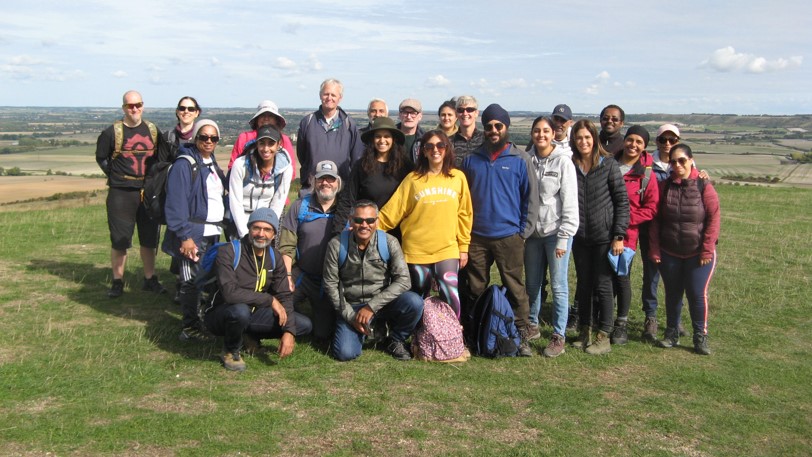 The Dadima’s walking group and OU team on the top of Ivinghoe Beacon. Credit: Kate Ashbrook.

Here we present the first of a series of reflective guides to our ‘storied walks’. This guide is for a circular walk of around seven miles from the National Trust Visitor Centre on the Ashridge Estate to Ivinghoe Beacon. (The latter is designated as a Site of Special Scientific Interest (SSSI) for its wildlife.)

We met at the Bridgewater Monument next to the Ashridge National Trust Visitor Centre. Following an introduction from Geeta we walked north along forest trails and tracks, keeping to the top of the chalk escarpment. Joining the Ridgeway above Incombe Hole, we then climbed to Ivinghoe Beacon where we enjoyed a shared lunch (and lots of excellent chai).

Following lunch, we continued our walk together, dropping down towards Gallows Hill to the east. We wound our way back to the Ashridge National Trust Visitor Centre through the woods of The Combe and crossing Ivinghoe Common.

The Landscape Stories team was selected for two key purposes: 1) to bring particular forms of expertise and experience to the project; and 2) to represent different groups, in particular with the aim of engaging with people who identify as belonging to a group who are under-represented in Earth and environmental sciences.

The team includes: Dr Geeta Ludhra, as the leader of Dadima’s and an expert in equity, diversity and inclusion (EDI); Dr Anjana Khatwa, an expert in science communication and EDI; Professor Clare Warren, Dr Yoseph Araya and Dr Marcus Badger environmental scientists (geologists and ecologists); and Professor Richard Holliman, a social scientist with responsibility for leading our reflective work. 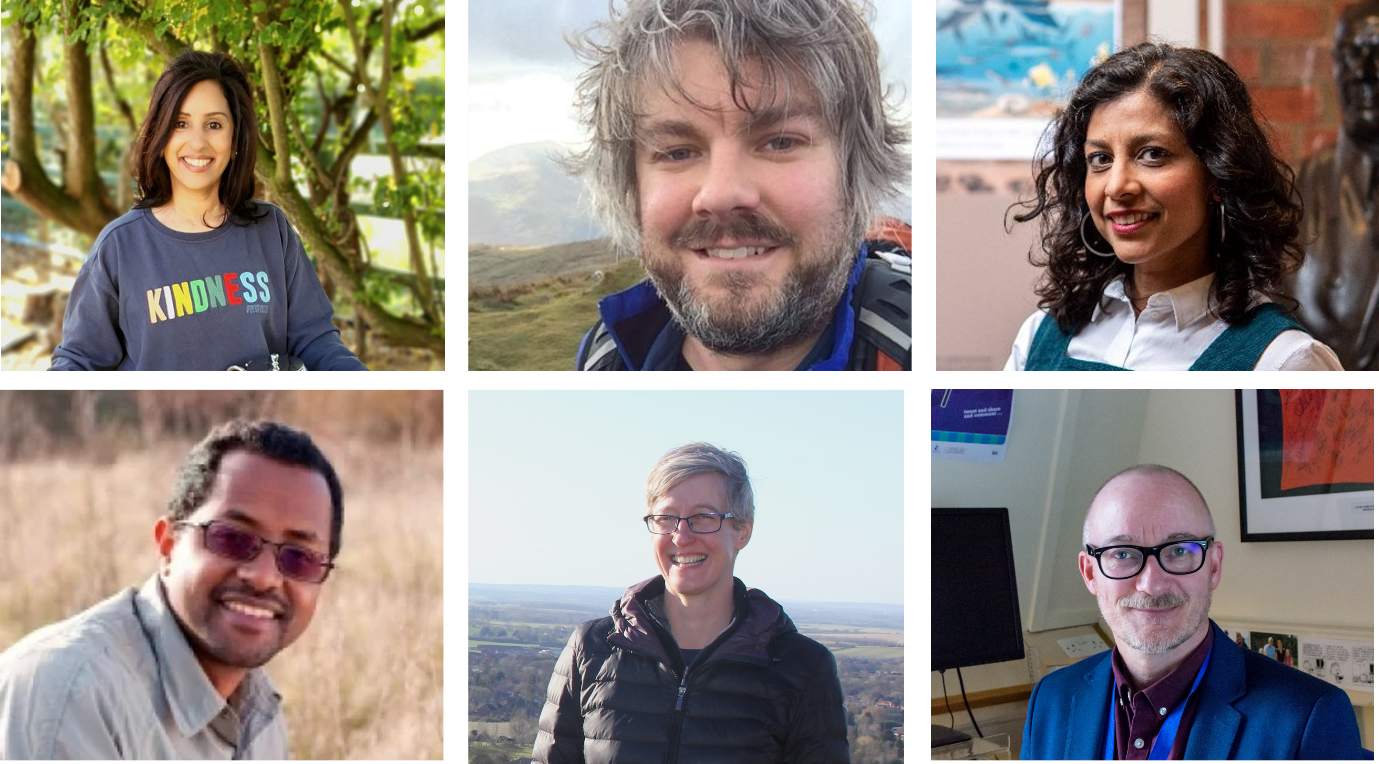 Together, the Landscape Stories team represents people from different ethnic, cultural and nationality backgrounds. We were united in acknowledging that white members of the team were privileged, but that change was possible if we work together openly and collegiately to challenge structural inequalities. As a team, we were (and remain) committed to promoting anti-racist approaches to promoting greater access to nature.

We acknowledge that these changes will not be straightforward. During the course of our project, members of our team were challenged for calling for positive change in making access to nature more equitable.

Processes
We used a storytelling approach, supported by scientific, cultural and historical facts (Anjana Khatwa, 2019). Drawing on Anjana’s expertise, in consultation with the walk leaders, we trialled different ways of explaining Earth and environmental science content, connecting landscapes with everyday experiences, and weaving in personal narratives.

We held joint planning meetings to discuss the nature and content of stories to be shared, and how they would better connect with the audience’s lived experiences. Geeta’s and Anjana’s input into these discussions, exploring their lived experiences and Geeta’s knowledge of convening the Dadima’s group, was key to making connections between the science, culture and history. We also ran ‘dress rehearsals’ of the talks via online meetings to review progress and offer constructive feedback. We argue that, by working cooperatively, we surfaced and shifted power dynamics between scientists and community people.

As examples of the talks, we explained meadow species diversity from the traditional description of them as ‘hospitals of the field’ due to the healing properties of specific plants that grow there (see ‘Healing herbs’). We also sought to connect geology with lived experience, by explaining how chalk was quarried and incorporated into flour as a nutritional additive (see ‘Nutritional rocks’).

My story stemmed from a childhood memory of catching a cold when I lived in Eritrea. My mother went to the backyard and plucked a few eucalyptus leaves (from the blue gum species Eucalyptus globulus). She boiled the leaves and invited me and my siblings inhale the steam. This event created the memory of a ‘medicine cabinet’ being in the garden.

Later on, following my training in ecology, I was aware of what species of plants animals need to consume to feel well, as well as research on ‘species rich meadows’. I came across the expression ‘meadows as hospitals of the field’ – where farmers left sickly livestock in rich meadows, so they consumed hopefully some health providing species.

Through further investigation, I was able to pick five ‘superhero’ species commonly found in chalk meadows that provide healing power. I picked out a few simple characteristics (e.g. flower colour, leaf shape, etc …) to enable walkers to identify them as we proceeded in our walk. There was deliberate decision to use five species and five or less characteristics, with distinct colours, as they can be counted on one hand and are hence easy to recall. The image below shows the selected species. 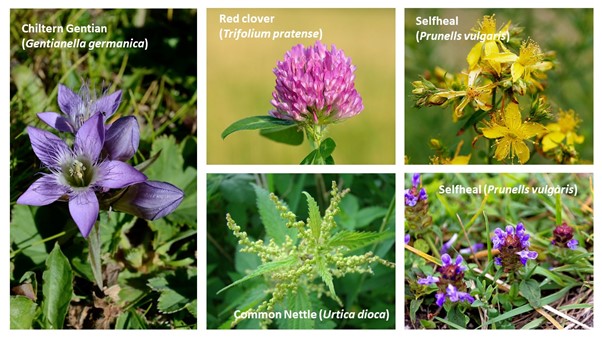 I was able to illustrate the ‘superhero’ medicinal plants hiding amongst all others in the vegetation. I used the analogue of a ‘superhero’ chocolate box, with the simple flower colours identifying them and making it easier to recall. For example, the ‘yellow superhero’ was St Johns wort, used to treat wounds, while the ‘purple superhero’ described the Chiltern gentian, which helps dress wounds and aid digestion.

I wanted to explore the links between rocks and health, as all of the minerals we need for a healthy life are originally sourced from the rocks beneath our feet. 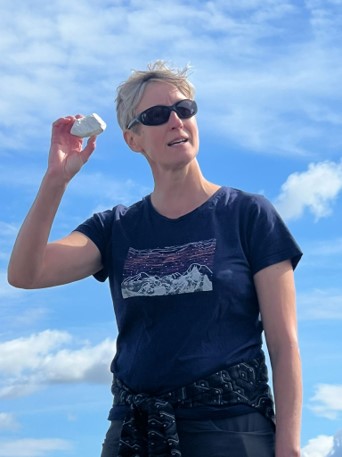 Being easy to access (it’s just beneath the top soil) and process (it’s powdery), chalk was used fairly extensively before the 1750s (along with powdered animal bone and alum) to bulk out flour and increase profit margins on bread. (At this point there was no legislative oversight on food additives. The Making of Bread Act was passed in 1757.)

This practice coincided with an increased movement of people from rural to urban areas and the decrease in time and easy access to ingredients to bake bread at home. Since flour was expensive and bread was sold by weight, unscrupulous merchants looked for ways to bulk out their flour with something white and powdery. The addition of either of these additives in bulk caused problems with digestion – can you imagine a belly full of rock powder?

In the UK today around 1g of chalk is still added to every pound (454g) of flour to fortify it with calcium. Chalk is also added to breakfast cereals. This is done legally. The process of refining wheat into flour means that many nutrients are stripped out. Calcium is vital for the healthy development of bones and teeth, and chalk, being mainly calcium carbonate, is an excellent source of calcium.

The chalk under the Chilterns is a ready source of calcium carbonate, and there are active chalk quarries near Luton and Dunstable, just down the road from Ashridge, where chalk is extracted, processed and added to bread flour and cereals. So, when you next munch on a slice of white bread or a bowl of cornflakes, think about the humble white rock that is chalk.

‘Nature and wellbeing’ (Marcus Badger)
I spoke of the benefits for personal wellbeing from spending time in nature. The chalk downland landscapes that we walked over during this walk have a particular connection and resonance with me. I find them a familiar, comforting place to be.

In my contribution, I encouraged those we walked with to think about the landscapes that they return to, and what underpins both that draw, and which rocks underlie those landscapes by showing the geological map of the UK. 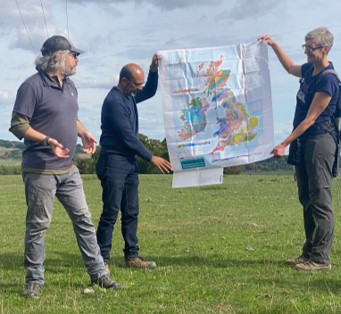 Marcus, discussing the geological map of the UK. Subash and Clare are holding the map. Credit: Geeta Ludhra.

The chalk which makes up the softly curving landscape of the Chilterns was deposited on the floor of a shallow sea in the Late Cretaceous, more than 66 million years ago. The remains of tiny plankton called coccolithophores settled to the bottom of that sea and formed the chalk, before the collision of Africa into Europe gently folded the rock into a broad arc of hills that runs from East Anglia, through the Chilterns, around London and to the south coast in Sussex. The chalk hills represent a small, distant ripple of the same cataclysm that formed the mighty Alps.

As all these hills are underlain by the same type of rock, the hills have the same character. As a child I spend important times in this landscape – exploring the chalk cliffs of Hunstanton with my mother, and the Sussex downland with my Grandad Bob. The chalk shaped these landscapes, and these landscapes shaped me as a person and as a geologist.

In later life, I’ve often been drawn back, escaping to the chalk landscapes of the Ridgeway as well as revisiting the Sussex downs when I can. The chalk has, like the thread which it weaves through southern England, been a thread which has been woven through much of my life. Even now, I research the molecular fossils left behind by the same coccolithophorid algae which produced the chalk.

Showing the geological map of Great Britain & Ireland showed the country we live in in a completely different light and was a great conversation starter. An image of our landscape that many had never seen before, the patterns of different coloured rocks cross many of the boundaries and borders that we usually impose upon the landscapes. Without roads, railways and cities the land takes on a very different meaning.

People were drawn to see what was under the ground that they frequently stood upon, and also the huge diversity in types of rock which underpins our Atlantic archipelago. Whilst the political borders weren’t obvious, some regions quickly stand out – the complexity of the rocks in the mountainous areas of north Eryri (Snowdonia) and Cumbria; the fact that the rocks of Wales, Scotland and England are actually quite distinct, although exactly where you put the political and rock borders differ. Seeing the landscape in this new way allowed people to open up and talk about their own landscape stories

What worked well and what will we change?
The storytelling approach worked really well in making connections between aspects of environmental science and everyday life. This approach also offered an authentic perspective of what it means to be a scientist, how scientists are influenced by experiences in their lives, and how they cope with what is often a highly pressured job.

The training and ongoing support provided by Anjana helped immeasurably with understanding how stories can be told, and in developing each of the individual contributions.

Next steps
We are using the experience of our walk and talk from Ashridge to Ivinghoe inform our practices for future walks.

We have planned two further walks as part of this project. The first is a walk already scheduled in the Dadima’s calendar as the pre-Christmas celebration walk, on 11 December 2022 (10am start) in Lewknor. In conjunction with Geeta we have planned a series of stories around the theme of Celebration.

In January, we have planned a walk along and around the Thames, starting in Henley on Thames. The theme of this walk will be Rivers as an agent of creation and destruction. 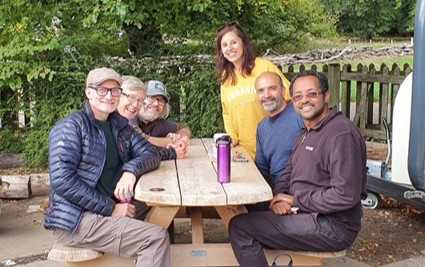 All the authors are members of the NERC-funded ‘Landscape Stories’ Project and are staff or affiliated visitors in the School of Environment, Earth and Ecosystem Sciences (EEES) at the Open University.

Funding
‘Landscape Stories’ is a public engagement project funded by the Natural Environment Research Council (UKRI/NERC) to: 1) build capacity of researchers to engage innovatively with members of the public; 2) inspire public audiences with environmental science and 3) trial approaches to public engagement.

Landscape Stories has been informed by work completed on an earlier NERC-funded Project called Walking the Walk.