‘You Study What?!’: guest blog by Professor Charles F. Emmons 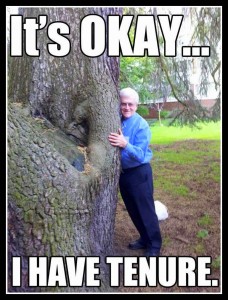 This is a special guest blog posting by Professor Charles Emmons of Gettysburg College, USA. Charles is a sociologist and has published widely from his research on the sociology of science and spirit, and appeared on numerous TV and radio shows in the US and Hong Kong.

Together with his wife, Penelope – an ordained Spiritualist Minister and healer – Charles wrote Science and Spirit: exploring the limits of consciousness as part of a wider ‘where science meets spirit’ project.

I first met Charles at the Exploring the Extraordinary Conference in York in 2011, where he stuck in my mind as being the first – and only – senior academic I have ever hugged a tree with! In this blog posting Charles reflects on his experiences as an academic and sometimes traveler to worlds beyond the habitual academic gaze. As you will see, it is not always in easy ride, but Charles has stuck with it and I look forward to many more exciting insights in the future from this very special member of our academic community.

Over to you, Charles:

As a sociologist I have studied “normal” topics like politics in Hong Kong, but I especially like to study science, alternate spirituality, and the paranormal.  Some of my books are about Chinese ghosts, UFO researchers, and spirit mediums.  People sometimes ask me what my academic colleagues think of this.

Usually I can’t tell, because the main way people deal with deviance is to ignore it.  Also, I’m not sure I want to know in a lot of cases.  As some wise person said, “What you think of me is none of my business.”  Gradually over the years I have come to appreciate the fact that if I am committed to an open investigation of “extraordinary” things considered taboo subjects in normal, mainstream science, I need to be willing to take the consequences.  Once I was sorely tempted to include the following in my application for a National Science Foundation Grant: “If this application were to receive funding, it would be contrary to my hypothesis.”

Sometimes I do get feedback from colleagues.  A subtle one happened when they had a reception for me at Gettysburg College to celebrate the publication of Chinese Ghosts and ESP: a Study of Paranormal Beliefs and Experiences in 1982.  One professor (from another department) said, “Oh, I’m surprised it’s a hardback! You’d think with a subject like that it would be a paperback.”

Less subtly, a few days before I was to appear in the TV show “Ghosts of Gettysburg” in the 1990s, a faculty member in the natural sciences sent an e-mail to the entire faculty urging them not to watch the show on the grounds that it was going to be a lot of nonsense.  This was an interesting statement considering that nobody could have seen any part of the broadcast ahead of time.  Perhaps he had strong precognitive abilities.  I thought that the true spirit of science was to consider all questions and to keep an open mind before examining the data.

Perhaps the most negative reaction I ever received happened at a sociology conference in the late 1990s at which I gave a talk about UFO researchers from a sociology of science perspective.  One man in the audience complained bitterly that I had labeled his fellow professor at Harvard, John Mack, a “ufologist.”  Perhaps I was embarrassing Harvard, but in fact John Mack had written a book about UFO abductees and had participated in many UFO conferences, thus fitting my operational definition of a ufologist.  Shortly thereafter Harvard University established an ad hoc committee to investigate Mack’s work with abductees, whom he claimed were not crazy but were in fact having some kind of experience worth examining.  His attorney asked me to write a statement to the committee about Mack’s work and the issue of academic freedom.  He had to spend at least $130,000 in legal fees defending himself (successfully).

In 2003 my wife Penelope and I published a book about spirit mediums (Guided by Spirit: A Journey into the Mind of the Medium).  I sent a copy of it to the famous sociologist of religion (and the paranormal etc.), Andrew M. Greeley, who had been on my dissertation committee in 1971.  After reading it he replied that he wanted to thank us for writing such an interesting book.  “I’m glad,” he added, “that you got tenure before you wrote it.”  Greeley wrote the oft-quoted piece, “The Paranormal Is Normal,” meaning that most people have such experiences, even though mainstream science denies the value of studying them.

I really must say, however, that I am fortunate to have gotten tenure (before Chinese Ghosts actually) and to have received financial support for my research (although not as much as I received when studying Hong Kong politics, a “normal” topic).  I am also grateful for the positive reviews and supportive comments I have received from people I respect (like Scott Rogo who called Chinese Ghosts “a refreshing change from the nonsense”).

I’ve come to feel sorry for people who are narrow minded in their view of what science is.  They’re missing out.  As J. Allen Hynek, the founder of modern ufology said, “Science isn’t always what scientists do.”  And I am delighted to see the growing interest in serious study of the paranormal and alternate spirituality, especially in the UK, and especially among many young scholars.

7 Responses to ‘You Study What?!’: guest blog by Professor Charles F. Emmons