I can be a bit of a glass half empty sort of person, but recent events have made me reflect on society’s capacity to look for failure in success.

I guess my thinking comes in part from the events surrounding the ExoMars 2016 mission, and the excitement and disappointment felt in the School of Physical Sciences at the Open University, of which I am Head. On 19th October, two things were supposed to happen, about 225 million kilometres away, in the vicinity of Mars. First of all, the Schiaparelli lander (the shiny bit on top of the Trace Gas Orbiter, of which a quarter-sized model is shown in the photograph below), which had separated from the TGO previously, was supposed to land on Mars. Well it did, after a fashion; trouble is it came in far too fast and appears to have exploded on impact. Hmmm, so that was a failure then? 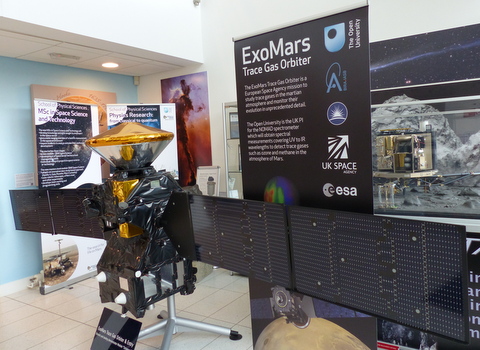 Well, actually no. Schiaparelli was a “entry, descent and landing demonstrator module” – it was meant to test and demonstrate the technology. The majority of that technology worked according to plan. The heat shielding operated as anticipated during atmospheric entry, the parachute deployed correctly and further slowed the lander, the front heat shield jettisoned as planned and the landing radar was activated and began returning data. Unfortunately, Schiaparelli then released its parachute earlier than anticipated and only fired its landing thrusters for a few seconds rather than the predicted 30-second burn; shortly afterwards communication was lost.

It is important to note that most of the data which was collected during Schiaparelli’s descent has been recovered. The mission’s AMELIA team, of which the my colleague Stephen Lewis is Co-Principle Investigator, is aiming to use this descent data to reconstruct the lander’s trajectory from an altitude of around 120 km down to the point at which it lost contact. The team can then build up vertical profiles of the Martian atmosphere – e.g. temperature, pressure, wind speed – which will be compared with existing atmospheric models and simulations. This is the first landing attempted during the planet’s annual dust storm season, meaning that the results will offer unprecedented insight into the atmosphere at this time of year.

Most significantly, the majority of the science planned for this part of the ExoMars programme will be undertaken by the Trace Gas Orbiter (TGO). And whilst we were all worrying about the fate of the Lander on 19th October, the TGO had successfully entered Martian orbit. That’s a real success. The OU is closely involved closely on two of the orbiter’s instruments: Manish Patel is Co-Principle Investigator on NOMAD, an Infrared-to-UV spectrometer investigating the composition of the Martian atmosphere, and Matt Balme is a Guest Investigator on the TGO mission, working with data from the CaSSIS instrument, which will be returning high resolution, colour, stereo images of the planet. These stereo images can be used to generate 3D elevation data of the Martian surface.

So, we have lots to celebrate. But the public sees the failure, not the success. This is the point at which I return from my description of events around Mars to my usual standpoint as a commentator on assessment-related matters. We need to remember how much damage a single “failure” (e.g. a poor exam result) can do to an individual, despite previous successes. Even when failure is real, we need to learn to move on and to build success out of failure rather than the other way round.

[With thanks to PhD student Rhian Chapman, whose description of the work of the TGO and Lander I have adapted from the School of Physical Sciences’ website (http://www.open.ac.uk/science/physical-science/news/exomars-update)]

This entry was posted in ExoMars, Success and failure and tagged ExoMars, failure, Success. Bookmark the permalink.