Confidence-based marking is one way of dealing with the ‘guessing effect’ for multiple-choice questions, but it can also be used to make students engage at a deeper level with questions. Jon Rosewell has an interesting eSETeM project in this area (getting students to rate their confidence before seeing the distractors) and Silvester Draaijer has recently blogged on the subject.

I’m not comfortable with the use of negative marking and, probably for this reason, I’ve never been very keen on the idea of confidence-based marking. However I can see that  if you are using this approach to encourage deeper learning then there might be some mileage it in.  One of the criticisms of confidence-based marking comes from the theory that girls tend to be less confident than boys, so are disadvantaged. But of course, when properly used, you aren’t necessarily penalised for lack of confidence, rather for lack of an appropriate level of confidence – and Tony Gardner-Medwin has shown that female medical students are not disadvantaged by the approach.

Several people, including Tony (who works at a Medical School) make the point that doctors need to have confidence in what they are doing. When I heard him speak, several years ago now, that made me very upset because I had recently recovered from a serious illness which my GP incorrectly diagnosed as a mental breakdown. He was sure he was right and his confidence caused a delay in reaching the correct conclusion (as well as knocking my confidence further; in addition to feeling ill I had to deal with the thought that I was cracking up!). However, on reflection, I can see Tony’s point. I want doctors to have confidence when they are right – but to have the decency to admit that they aren’t sure when the situation is less clear-cut.

Having blogged about one thing that’s rather more personal than my usual fare, I will now tell you something that I hadn’t told anyone until I was in the middle of a discussion of confidence-based marking’s pros and cons a couple of weeks ago. When I heard Tony Gardner-Medwin speak, he used some ‘every day’ examples to illustrate his approach. One of these asked a question about the speed limit on dual carriageways in the UK. I ticked the ’70 miles per hour’ box and indicated that I had high confidence in my answer. I was devasted when Tony said that the correct answer was ‘of course’ ’60 m.p.h’ – apparently I was wrong. For the next few months I crawled around the country – it took me some time to even have the confidence to check the highway code. And of course I wasn’t wrong! So, if you use questions of this type, make jolly sure that you are right.

That would have been the end of this little anecdote were it not for a wonderful insightful comment from someone else in the meeting when I was telling my story. Her comment was [the speed limit] ‘depends what vehicle you’re driving’. Oh yes! Life just isn’t as black and white as the world of multiple-choice questions would have us believe: 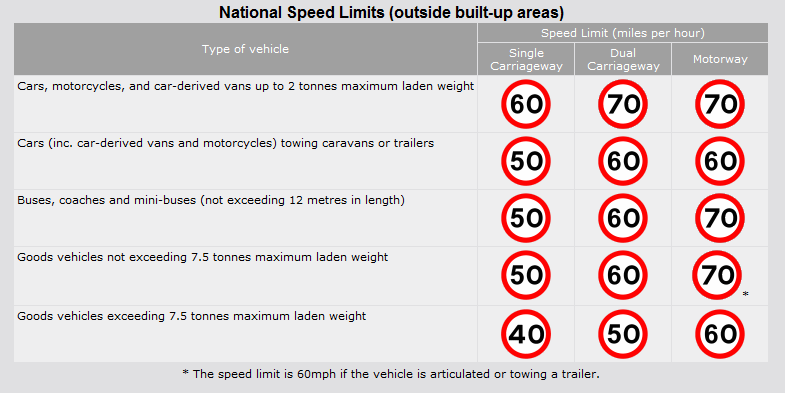 2 Responses to Are you sure?