First of all, for the benefit of those who are not native speakers of English, I ought to explain the meaning of the phrase ‘It’s just not cricket’. The game of cricket carries connotations of being something that is played by ‘gentlemen’ (probably on a village green) who wouldn’t dream of cheating – so if something  is unfair, biased or involves cheating it is ‘just not cricket’. This post is about bias and unfairness in assessment. 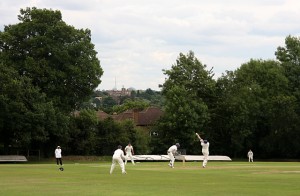 It is reasonable that we do all we reasonably can to remove unfair bias (e.g. by not using idiomatic language like ‘it’s just not cricket’…) but how far down this road it is appropriate to go is a matter of some debate. Some of my colleagues love to make their tutor-marked assignment questions interesting and, by coincidence, some of them are rather fond of cricket…so we end up with all sorts of energy considerations relating to cricket balls and wickets. Is that fair? Are students who don’t know about cricket disadvantaged? Or perhaps it is the students who know lots about cricket who are disadvantaged –  they  may try to interpret the question too deeply. In situations like this, I insist on including an explanation of the terms used, but I sometimes wonder if we’d be better not trying to make assessment ‘interesting’ in this way. The sport gets in the way of the physics.

There is also a small but marked effect as a result of students feeling ‘excluded’ by something they don’t understand. The question may not really require any understanding of cricket (or whatever) but if you feel that you are being asked about something you don’t understand that you may panic. This happened to me in my O level physics exam (about a million years ago) which (to the eyes of an underconfident 15-year old girl) was all about car engines.

Some people go to extreme lengths to compensate for bias e.g. by ensuring that the percentage of girls and boys or of each ethnic group who pass an exam or test should be equal. I don’t think that’s fair at all – different people are good at different things. If we carry this approach to its logical conclusion then we would say that everyone ought to pass all exams – otherwise we are disadvantaging those who can’t do maths (or whatever the exam is assessing).

However, it is right that we do everything we can to remove unfair bias. Courtesy of Donlan (1982) here is an example of a question that, presumably, was intended to measure American students’ logical reasoning ability but instead measured knowledge of ‘upper-class recreational activity:

runner is to marathon as

(a) envoy is to embassy

(b) martyr is to massacre

(c) oarsman is to regatta

(d) referee is to tournament

(e) horse is to stable

Apparently 53% of white pupils but only 22% of black students gave the desired answer (c).

This entry was posted in bias, fairness and tagged bias, cricket, fairness. Bookmark the permalink.